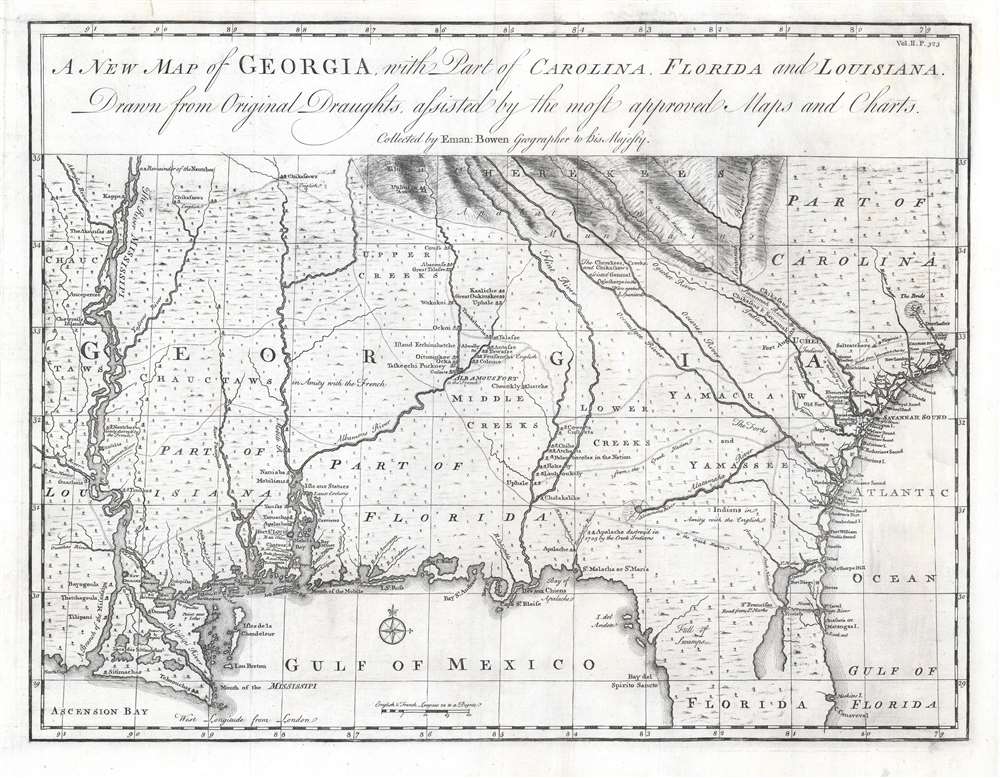 The most important map of Georgia issued before the American Revolutionary War.

One of the finest and most important large-scale maps of Georgia ever produced, this is Emmanuel Bowen's 1748 map of the colony of Georgia, considered the first obtainable specific map of that region. The map covers the Atlantic coast from Charleston (South Carolina) to Cape Canaveral (Florida) and extends westward to just beyond the Mississippi River, covering the Gulf Coast and the Mississippi Delta. It extends north along the Mississippi to about 35° N Latitude. This map was drawn by Bowen just 15 years after General James Oglethorpe received the Georgia charter from King George II, for whom the colony is named (April 21, 1732). It was intended to accompany the expanded 1748 edition of John Harris's work Navigantium atque Itinerantium Bibliotheca, which included a new chapter on the founding of Georgia.

This map is a unique production, in no way derivative, and is drawn directly from the reports of early Georgia colonists, to which Bowen had direct access. It shows Oglethorpe's new Georgia settlements of Savannah and (New) Ebenezer, as well as rarely mapped inland settlements such as Mount Venture and Argyle Fort. It names numerous American Indian Villages, noting their allegiance to either English or the French, and, significantly, the routes by which these villages could be accessed – many here delineated for the first time. The borders of the map roughly follow the practical limitations of the Georgia charter, but also includes parts of French Louisiana and Spanish Florida, areas of threat about which this map provided valuable information. While the original Georgia charter of 1732 describes a coast to coast grant, from the Atlantic to the 'South Seas' (Pacific Ocean) the scope of the colony was practically limited by the French presence in Louisiana. Nonetheless, in a jab to the French, Bowen here extends the name 'GEORGIA' to just beyond the Mississippi.

Georgia was the last British colony founded in North America. It was in the late 17th century that the British turned their attention lads south of Virginia. They realized that by colonizing this region they could not only create a buffer zone between Spanish Florida and the rich Virginia and New England Colonies, but also facilitate easier trade with British colonies in the West Indies. At the same time, the British were hesitant to provoke the Spanish by moving military forces into the region.

Georgia specifically was founded with the intention of creating a buffer zone. General James Oglethorpe offered an innovative way to achieve this. He would create a colony for debtors or, as he called them, the 'worthy poor.' Unlike the Carolina colony to the north, Oglethorpe imagined Georgia to be a land free of slavery, an essential tenet written into the Georgia charter. Instead of sprawling plantations worked by slaves, it would be a colony of smallholds (small farms). The hardworking farmers, all of which would be robust healthy freemen defending their lands, would also form the core of a colonial militia, able to quickly mobilize to save off Spanish or French aggression.

The plan relied on strong trade relationships with the local American Indian tribes. Oglethorpe believed that by forging deep ties with the Indians and luring them away from their French and Spanish competitors, England cold buffer its colonial frontiers. With a broad network of American Indian allies that would come to the defense of the Georgia settlers in times of needs, the Georgia colony, Oglethorpe surmised, would be secure.

In this spirit, the map identifies much that would be of interest to Georgia settlers. Bowen notes which tribes are friendly with the English, and which are allied to the French. He marks the site of French depredations against the American Indian nations, such as the February 1730 French massacre of the Natchez and burning of the Grand Village. He also notes a site farther north along the Mississippi as the 'Remainder of the Nautches' suggesting that the remnant of that tribe may have resettled there.

A Document of Record

This map was drawn and engraved by Emmanuel Bowen from original sources. It was published in the expanded 1748 edition of John Harris's work Navigantium atque Itinerantium Bibliotheca. This edition contained a chapter on the newly founded Georgia colony which Bowen's map was intended to illustrate. Only three examples of the separate map are listed in OCLC, at Florida State University, the Duke University Library, and the University of Houston. There is also an example at the Touchton Map Library at the Tampa Bay History Center. A must for any serious southeast collection.

Excellent condition with no mends.