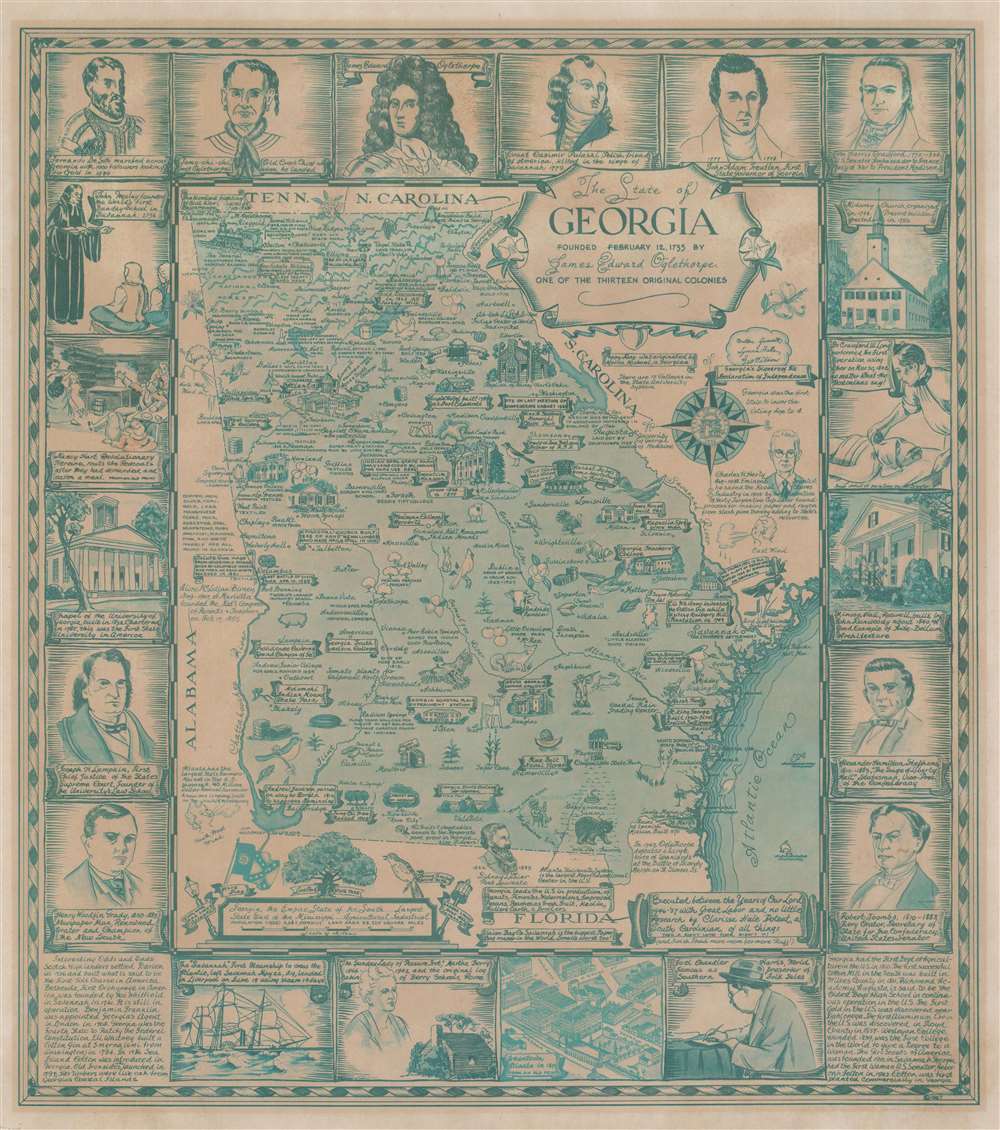 A rare pictorial map of Georgia highlighting parts of the state's history.
$200.00

This is a 1957 Clarissa Hale Poteat pictorial map of Georgia. Poteat uses pictorial vignettes to present information concerning the state's history, agriculture, and important landmarks. Many of the vignettes reference the American Civil War, with battles, generals, and important government officials and events all referenced. Georgia's educational system is also highlighted and many of its secondary schools and universities are identified. Cities and towns throughout the state are also labeled, while other illustrations depict the state's wildlife. State parks are named as well. A pictorial border consisting of portraits of famous Georgians encircles the central map, and among those personalities immortalized are: Fernando De Soto, the first European to set foot in Georgia; James Edward Oglethorpe, the founder of the Georgia colony; and Count Casimir Pulaski, a Polish nobleman, who fought on the American side during the American Revolutionary War and has been called the 'father of American cavalry'.

This map was compiled and drawn by Clarissa Hale Poteat and published in 1957. This is the only known example.

Clarissa Hale Poteat (July 10, 1905 - August 3, 1986) was an American artist. Born in Greenville, South Carolina, Poteat's father, Dr. Edwin McNeill Poteat, was a Baptist minister who was president of Furman University, a professor at a Chinese university, and a pastor at an Atlanta church. Miss Poteat graduated from Meredith College in 1927 and attended art schools in New York City. She was a very successful commercial artist and worked for the Wrigley Engraving Company, Foote and Davies, and the United Family Life Insurance Company. Her best-known work is a pictorial map of Georgia and she donated the plates for this work to the Atlanta Historical Society. In 1957, Poteat entered a contest to write a twenty-five word description of one of the seven wonders of the world. She wrote about the Taj Mahal and won first prize, which was a three week tour of Europe. Poteat never married. Learn More...