1796 Reid Map of Georgia (including Alabama and Mississippi) 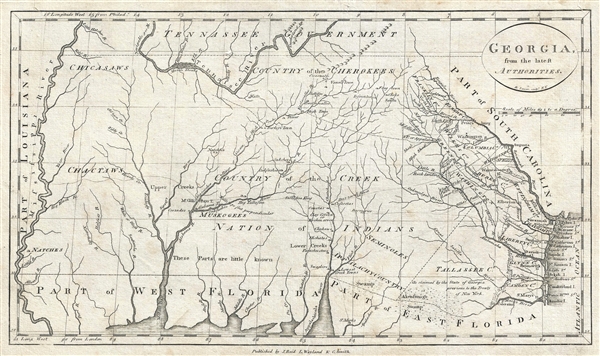 1796 Reid Map of Georgia (including Alabama and Mississippi)

One of the earliest obtainable specific maps of Georgia. Issued with the second atlas published in America.

One of the earliest obtainable specific maps of Georgia, this is a very attractive example of John Reid's 1796 presentation of Georgia. The map covers from the Atlantic Ocean to the Mississippi and from the Tennessee River to the Gulf of Mexico, covering all of modern day Georgia, Alabama, and Mississippi as well as parts of Florida and Tennessee. The map reflects the somewhat limited knowledge of the region available at the time of publication. European settlement of Georgia is at this point confined to those lands to the east of the Oconee and Altamaha Rivers – where a clear country structure and numerous large towns, including Savannah, are clearly discernable. West of these rivers, the lands are fully dominated by American Indian villages and tribes, but little is known of their deportment beyond easily accessible villages situated on major trade routes and riverways. Several trade routes between coastal communities and American Indian communities are noted, including one broad network extending all the way to the Mississippi River. Natchez is noted, but is not clearly connected to any of the known trade routes presented. The map identifies the Cherokee, Chicasaw, Chactaw, Muskogee, Creek and Seminole. It also attempts to address various border disputes, such as the annexation of a significant part of Creek territory, here identified as Tallassee County, in the 1790 Treaty of New York.

This is the first edition of Reid's Georgia According to the Latest Authorities. It is identifiable as such by the imprint, 'J. Reid, J. L. Wayland & C. Smith' which appears just below the bottom border. In subsequent editions only J. Reid, or nothing at all, is printed in at this location. The present map was engraved by Benjamin Tanner of New York. This map was published in John Reid's 1796 American Atlas. Although Reid's atlas is derived from the work of of London cartographer John Russell, this and 14 other maps from the atlas focusing on American states and regions, are new engravings that first appeared in this atlas. Cartographically the map is clearly derived from John Carey's map of 1795 but a close examination reveals it to be an entirely different, although visually similar, plate.