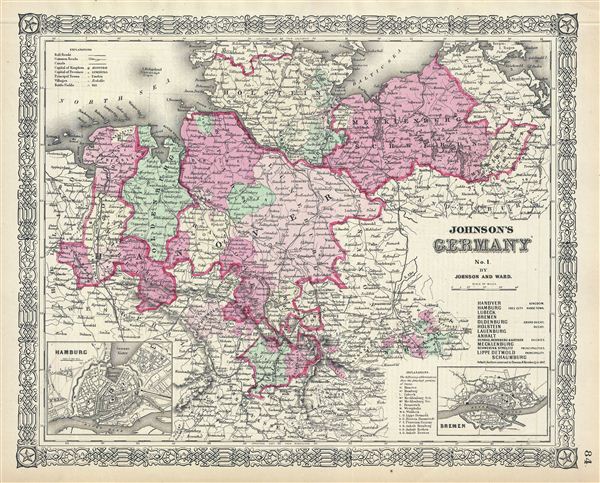 This is a beautiful example of the northern sheet from Johnson and Ward's 1864 Germany series. Details Hanover, Mecklenburg Schwerin, Holstein and Oldenburg. Insets detail the city of Hamburg and the city of Bremen.  The map is color coded according to district. Depicting the large and award range of the German Confederation has always been a challenge for Johnson. This is one of Johnson's earliest attempts, dividing the region into four separate maps, Germany 1, 2, and 3, and a separate Prussia sheet. Various towns, cities, railways, rivers and several other topographical features are noted with relief shown by hachure. It features the fretwork style border common to Johnson's atlas work from 1863 to 1869. Steel plate engraving prepared by A. J. Johnson for publication as plate no. 84 in the 1864 edition of his New Illustrated Atlas.  This is the first edition of the Johnson's Atlas to bear the Johnson & Ward imprint and the only edition to identify the firm as the 'Successors to Johnson and Browning (Successors to J. H. Colton and Company).'