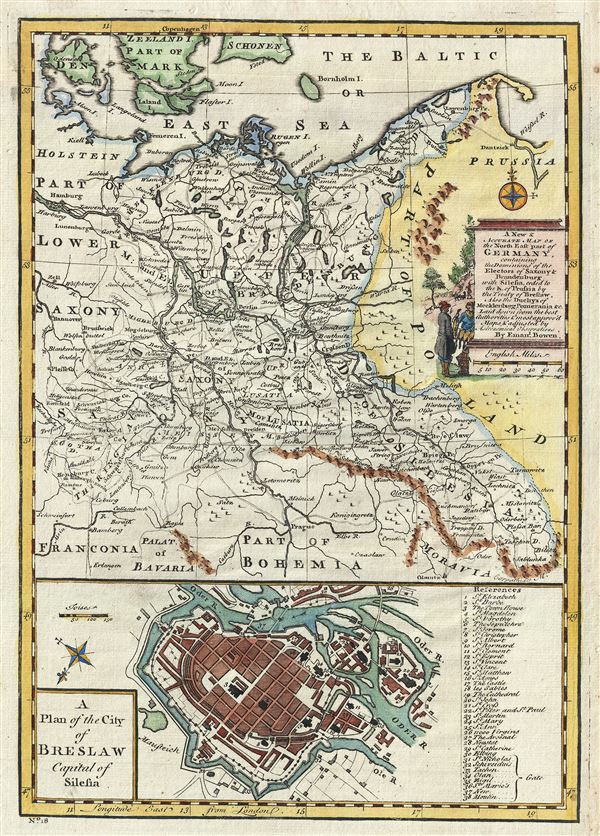 This is a beautiful 1747 map of the northeastern part of Germany by the British cartographer Emanuel Bowen. It includes the Electors of Saxony and Brandenburg and the duchy of Mecklenburg, Pomerania and Silesia. Centered on Berlin, the map covers parts of the modern day countries of Germany, Poland and the Czech Republic from the Baltic Sea south as far as Olmutz (Olomouc) and from Hamburg in the west to Dantzick (Gdansk) in the east. Major cities including Berlin, Prague, Hamburg, Hannover, Olmutz (Olomouc) and others are identified. Rivers, roads, lakes and other topography is also noted throughout, with mountains and forests rendered in profile. The lower half of the map includes an inset of the city of Breslaw (Wroclaw), the historic capital of Silesia. This inset map is highly detailed and notes the Oder River, streets, individual buildings and includes a reference key along the right border.

The title of the map makes reference to the ceding of Silesia to the Kingdom of Prussia by the Treaty of Breslau. Signed by the representatives of Maria Theresa of Austria and King Frederick of Prussia the Treaty officially ended the First Silesian War of 1740-1742. Maria Theresa ceded most of Silesia to Prussia, and a large part of the border demarcations made in 1742 still exists as the borders between the Czech Republic and Poland.

The map includes a beautifully illustrated title cartouche along the right border. This map was prepared by Emanuel Bowen as plate no. 18 for the 1747 issue of A Complete System of Geography.