1747 Bowen Map of Bohemia and Southeastern Germany (Bavaria and Salzburg) 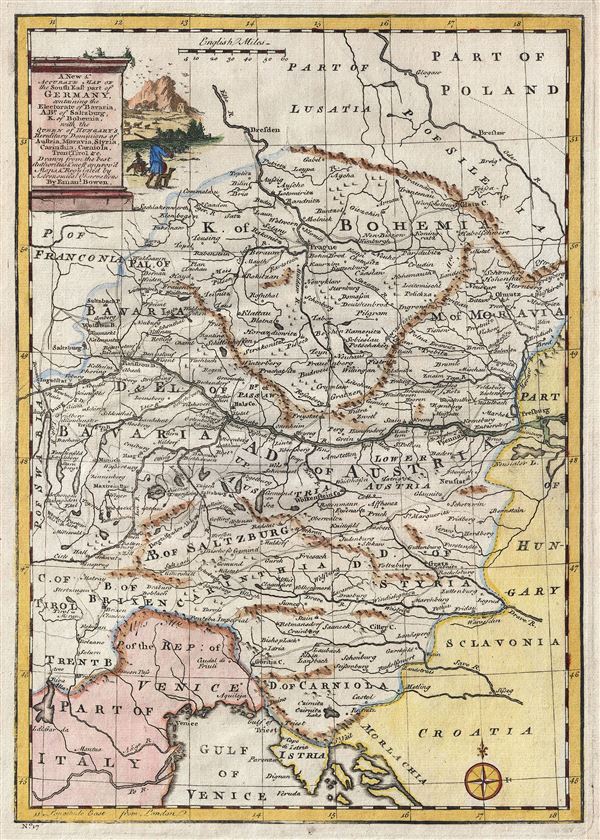 1747 Bowen Map of Bohemia and Southeastern Germany (Bavaria and Salzburg)

This is a beautiful 1747 map of the southeastern part of Germany and the Czech Republic by the British cartographer Emanuel Bowen. It includes the Kingdom of Bohemia (modern day Czech Republic), the Archbishopric of Saltzburg, and the Electorate of Bavaria. Centered on the Danube River, the map covers the modern day countries of Germany, Czech Republic and Austria from Dresden in the north to the Gulf of Venice in the South and from Salzburg in the west to Vienna in the East. Major cities including Prague, Brinn (Brno), Drasden (Dresden), Vienna, Olmutz (Olomouc), Saltzburg (Salzburg), Gratz (Graz) and several others are identified. Rivers, roads, lakes and other topography is also noted throughout, with mountains beautifully rendered in profile.

This map includes a beautifully illustrated title cartouche in the upper left quadrant. This map was prepared by Emanuel Bowen as plate no. 17 for the 1747 issue of A Complete System of Geography.