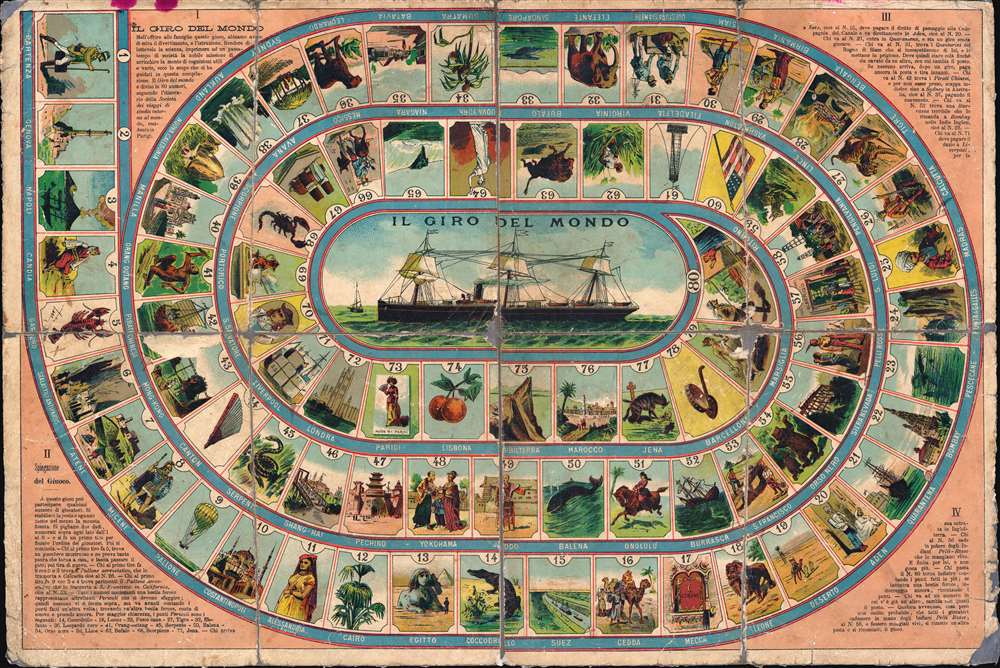 A rare c. 1890 Italian chromolithograph 'Snakes and Ladders' or 'Game of Goose' board inspired by Jules Verne's Around the World in 80 Days. The board forms a traditional spiral with a dual-powered steam and sail ship. The game substitutes the genre's traditional Kabalistic-inspired 63 squares with a Verne-inspired 80 squares. Instructions and interpretations of the icons appear in each corner.

The map is undated, but some of the iconography helps us assign an approximate date of 1890. Likewise, no publisher is labeled, but the board was likely printed in Milan by Bertarelli Achille. We are aware of examples on a single hard board, on a board divided at center, and as here dissected and laid on linen.

Bertarelli Achille (1888 - 1930) was an Italian Milan-based publishing and printing house active in the late 19th and early 20th centuries. The firm specialized in chromolithograph religious iconography, but also expanded to games, music covers, postcards, and other commercial printing. By 1900, the firm has more than 700 workers and a vast premises at Archimede 6, Milan. They further expanded with sales offices in Rome, Naples, Genoa, and Turin. The firm remained active until the 1930s before being done in by the hardships of World War II. Learn More...

Good. Wear on all old fold lines. Slight loss at fold intersections. Old linen backing.
Looking for a high-resolution scan of this?