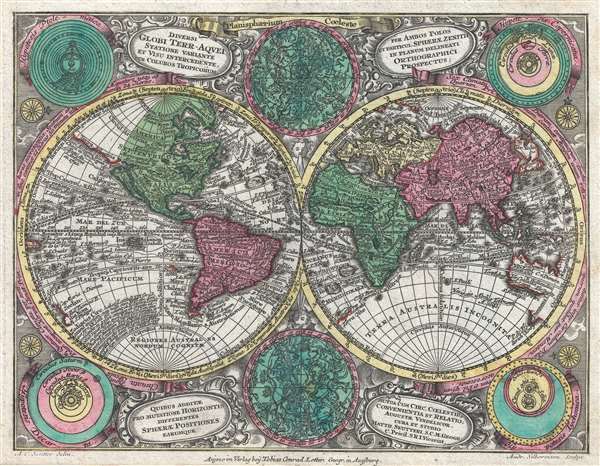 A beautiful highly decorative full-color c. 1762 double-hemisphere map of the world by Tobias Conrad Lotter. Published for the Atlas Minor, this is a smaller format yet incredibly dense map, with the hemispheres being surrounded by two celestial charts and four conficting cosmographical hypothesies (Ptolemaica, Copernicana, Decarta and Tychonica), as well as rich decorative embellishments. Includes a number of oddities and cartographic anomalies including an illustration of Insular California on the Luke Foxe / Sanson model, an expanse of land leading west from northwestern North America associated with Juan de Gama, an ephemeral New Zealand, the routes of various important explorers, and a loosely defined Australian coastline.

This map is one of the last maps to illustrate California as an Island – clear proof that the original 1730 plate had not been updated significantly. The idea of an insular California first appeared as a work of fiction in Garci Rodriguez de Montalvo's c. 1510 romance Las Sergas de Esplandian, where he writes

Baja California was subsequently discovered in 1533 by Fortun Ximenez, who had been sent to the area by Hernan Cortez. When Cortez himself traveled to Baja, he must have had Montalvo's novel in mind, for he immediately claimed the 'Island of California' for the Spanish King. By the late 16th and early 17th century ample evidence had been amassed, through explorations of the region by Francisco de Ulloa, Hernando de Alarcon and others, that California was in fact a peninsula. However, by this time other factors were in play. Francis Drake had sailed north and claimed Nova Albion (identified here on the northwest coast of California Island) near modern day Washington or Vancouver for England. The Spanish thus needed to promote Cortez's claim on the 'Island of California' to preempt English claims on the western coast of North America. The significant influence of the Spanish crown on European cartographers, especially the important French house of Sanson, in the form of the presently offered map, caused a major resurgence of the Insular California theory.

An unusual orange colored landmass that appears extending westward from northwestern North American is labeled after João da Gama and continues to the Asian side of the map as Compagnie Landt. This is a conflation of two separate but related legends/histories. The first refers to the discoveries of Portuguese explorer João da Gama (c. 1540 – after 1591), grandson of Vasco de Gama, who reputedly crossed the North Pacific in the 1580s, in the process mapping some of the Kuril Islands, possibly some of the Aleutians, and potentially even part of the American Coast. Gama supposedly also discovered islands rich in gold and silver, which led to subsequent expeditions by the Dutch explorers Maarten Gerritszoon Vries (1589 – 1657) and Cornelis Janszoon Coen.

Searching for da Gama's islands, Vries and Coen skirted the eastern coast of Japan and Hokkaido (then known as Yedo or Yeco) sighting the Japanese Kuril islands of Kunashir and Iturup. They sailed fully around Kunashir, but only sighted the western shore of the larger Iturup before claiming both islands for the Dutch East India Company (VOC) and naming them Compagnies Landt. Cartographers began combining Gama with Compagnies Landt as a vast singular body of land stretching all the way to America. While based upon actual sightings of the Aleutian and Kuril Islands, limited exploration led explorers to believe they were seeing not a chain of small islands, but rather a part of an expansive mainland. These conclusions would be mirrored later in the 18th century by sophisticated cartographers like Gerhard Friedrich Müller, who rendered the area as a great peninsula, until the dogged and meticulous mapping of Captain James Cook finally shed scientific light on the region.

History of the Map

The is one of the few maps drawn by Albrecht Carl Seutter, son of the eminent cartographer Matthäus Seutter, and engraved by Andreas Silbereisen. It was initially issued by Seutter in the 1728 first edition of his Atlas Minor. After Matthäus Suetter's death, Lotter acquired the plate for this map and added his own imprint at bottom center, as in the present example. The states of the map are based exclusively on the imprint with no changes to the map itself. Lotter's imprint was added sometime after 1762, when Albrecht Carl Seutter died. Lotter continued to reissue the Atlas Minor until his own death in 1777.


Matthäus Seutter (1678 - 1757) was one of the most important and prolific German map publishers of the 18th century. Seutter was born the son of a goldsmith but apprenticed as a brewer. Apparently uninspired by the beer business, Seutter abandoned his apprenticeship and moved to Nuremberg where he apprenticed as an engraver under the tutelage of the prominent J. B. Homann. Sometime in the early 1700s Seutter left Homann to return to Augsburg, where he worked for the prominent art publisher Jeremiad Wolff (1663 - 1724), for whom he engraved maps and other prints. Sometime around 1717 he established his own independent cartographic publishing firm in Augsburg. Though he struggled in the early years of his independence, Seutter's engraving skill and commitment to diversified map production eventually attracted a substantial following. Most of Seutter's maps are heavily based upon, if not copies of, earlier work done by the Homann and De L'Isle firms. Nonetheless, by 1731/32 Seutter was one of the most prolific publishers of his time and was honored by the German Emperor Karl VI who gave him the title of Imperial Geographer, after which most subsequent maps included the Avec Privilege designation. Seutter continued to publish until his death, at the height of his career, in 1757. Seutter had two engraver sons, Georg Matthäus Seutter (1710 - 173?) and Albrecht Carl Seutter (1722 - 1762). Georg Matthäus quit the business and relocated to Woehrdt in 1729 (and probably died shortly thereafter), leaving the family inheritance to his wastrel brother Albrecht Carl Seutter, who did little to advance the firm until in own death in 1762. Following Albrecht's death, the firm was divided between the established Johann Michael Probst (1727 - 1776) firm and the emerging firm of Tobias Conrad Lotter. Lotter, Matthäus Seutter's son-in-law, was a master engraver and worked tirelessly on behalf of the Suetter firm. It is Lotter, who would eventually become one of the most prominent cartographers of his day, and his descendants, who are generally regarded as the true successors to Matthäus Seutter. (Ritter, M. Seutter, Probst and Lotter: An Eighteenth-Century Map Publishing House in Germany., "Imago Mundi", Vol. 53, (2001), pp. 130-135.) Learn More...


Andreas Silbereisen (1713 - 1751) was a German printer and engraver active in Augsburg in the first half of the 18th century. Silbereisen worked extensively for Matthäus Seutter in addition to producing engravings for others and on his own account. Silbereisen is credited teaching the astronomer Tobias Mayer (1723 - 1762) engraving from 1744 to 1746. Learn More...