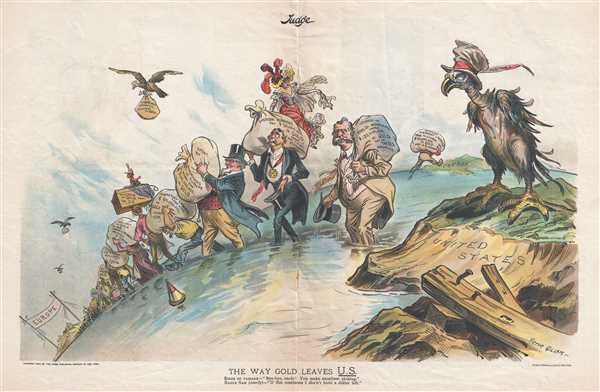 A political cartoon decrying the loss of American gold to foreign investors, which caused the Panic of 1893.
$950.00

This is an 1897 Victor Gillam cartographically themed political cartoon satirizing the Panic of 1893. The cartoon depicts a line of foreign citizens (all but one of them European) taking American gold out of the United States back to Europe or Canada. The United States is depicted as an eagle that has had nearly all of its feathers plucked, while sporting a ratty top hat with a ribbon that reads 'hard times'. All the Europeans, of course, are smartly dressed and boasting smiles, 'thanking' their 'uncle' for the wealth they are taking home with them. Gillam appears to be blaming foreign investment in American companies, along with foreign workers and American interests in Europe, for creating the 'hard times' suffered during the Panic of 1893. Coincidentally, Judge openly supported William McKinley for the presidency in 1896, and in 1897 McKinley was elected President. The American economy also began to recover that year, partially thanks to the Klondike Gold Rush.

The worst economic depression to hit the United States in its history, until the Great Depression of the 1930s, the Panic of 1893 left catastrophe in its wake. Estimates range that, at the peak of the Panic, unemployment ranged from seventeen to nineteen percent of the American workforce. As with any economic crisis, there appears to be no one cause. That being said, all the signs seem to point to over speculation in the investment market, either in agriculture or in railroad expansion. For whatever reason, when these investments began to fail, either due to droughts suffered by the farmers or the bankruptcy of the Philadelphia and Reading Railroad, creditors began to fear for their investments.

It is important to note that, in 1893, the U.S. Dollar was still on the gold standard, meaning that dollars could be exchanged for gold. At that point in time, the American currency was also on a system known as bimetallism, meaning that both gold and silver certificates were issued. Silver had been in vogue of late, which led to the market being flooded with silver coinage and certificates. All these factors led to the American public, and foreign creditors, wanting to possess their wealth, instead of leaving it in a bank. Foreign creditors, concerned about the crop failures and the bankruptcy of the overextended Philadelphia and Reading Railroad, began exchanging their dollars for gold from the U.S. Treasury. A run on the banks ensued, which depleted the U.S. Treasury to the minimum required by law. This, in turn, led to hundreds of bank failures and bankruptcies by private companies. In the end, President Cleveland had to borrow $65 million in gold from J.P. Morgan to support the gold standard.

The American economy began to recover in 1897. The election of President McKinley renewed confidence in the government, and the Klondike Gold Rush launched ten years of rapid economic growth. At least, until the Panic of 1907.

This cartoon was drawn by Victor Gillam and published by Judge in 1897. This cartoon, originally a centerfold in the June 12, 1897 issue of Judge appears to be reasonably rare. We have been unable to locate any other examples.

Gillam, V. 'The Way Gold Leaves U.S.' Judge June 12, 1897 (New York: Judge Publishing Company).     Judge (1881 - 1947) was a weekly satirical magazine published in the United States. The first issue was first printed on October 29, 1881 and was only sixteen pages long. Judge was launched by James Albert Wales, Frank Tousey, and George H. Jessop, who had previously worked for its rival magazine Puck. In the mid-1880s, William J. Arkell purchased the magazine, which was having difficulty competing with Puck. Arkell, taking advantage of his considerable wealth, persuaded cartoonists Eugene Zimmermann and Bernhard Gillam to leave Puck and join the staff at Judge. As Arkell was a supporter of the Republican Party, Judge soon became a platform for criticizing the Democratic administration of Grover Cleveland, which was blamed for the Panic of 1893, among other issues. With support from the Republican Party, Judge saw a rise in popularity during the 1880s and 90s, surpassing Puck in both content and circulation. Judge also widely supported the candidacy of William McKinley, largely through the work of cartoonists Victor Gillam and Grant E. Hamilton. Judge reached its peak circulation of around 100,000 by 1912. One of its former editors, Harold Ross, used his experience at the magazine to launch his own publication, The New Yorker in 1925, which quickly began to compete with Judge. Due to the success of The New Yorker and the Great Depression, Judge became a monthly is 1932 and ceased circulation in 1947.

Very good. Even overall toning. Text and sketches on verso.