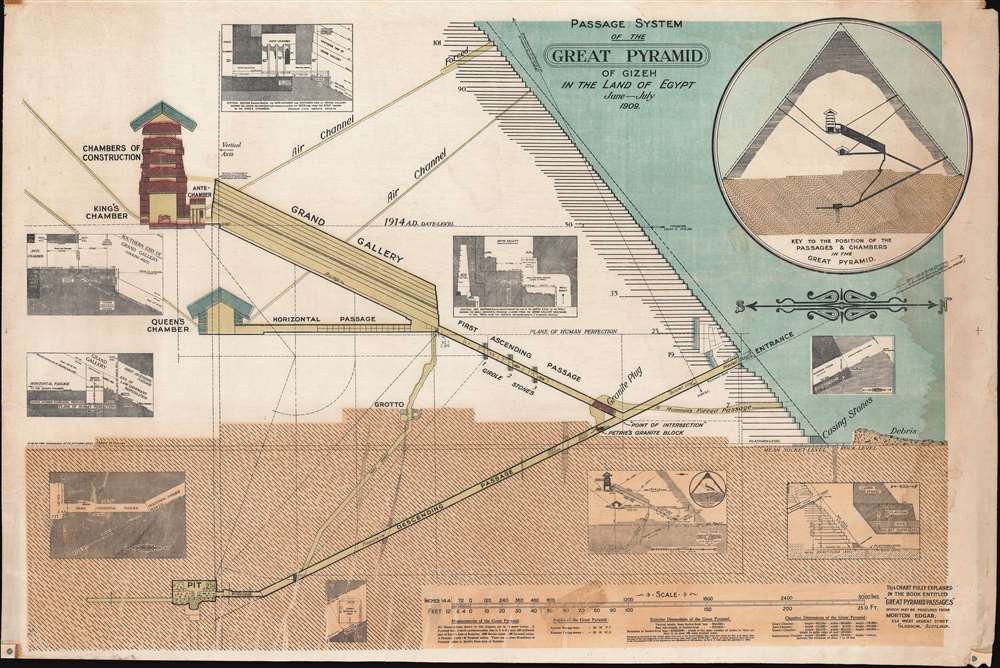 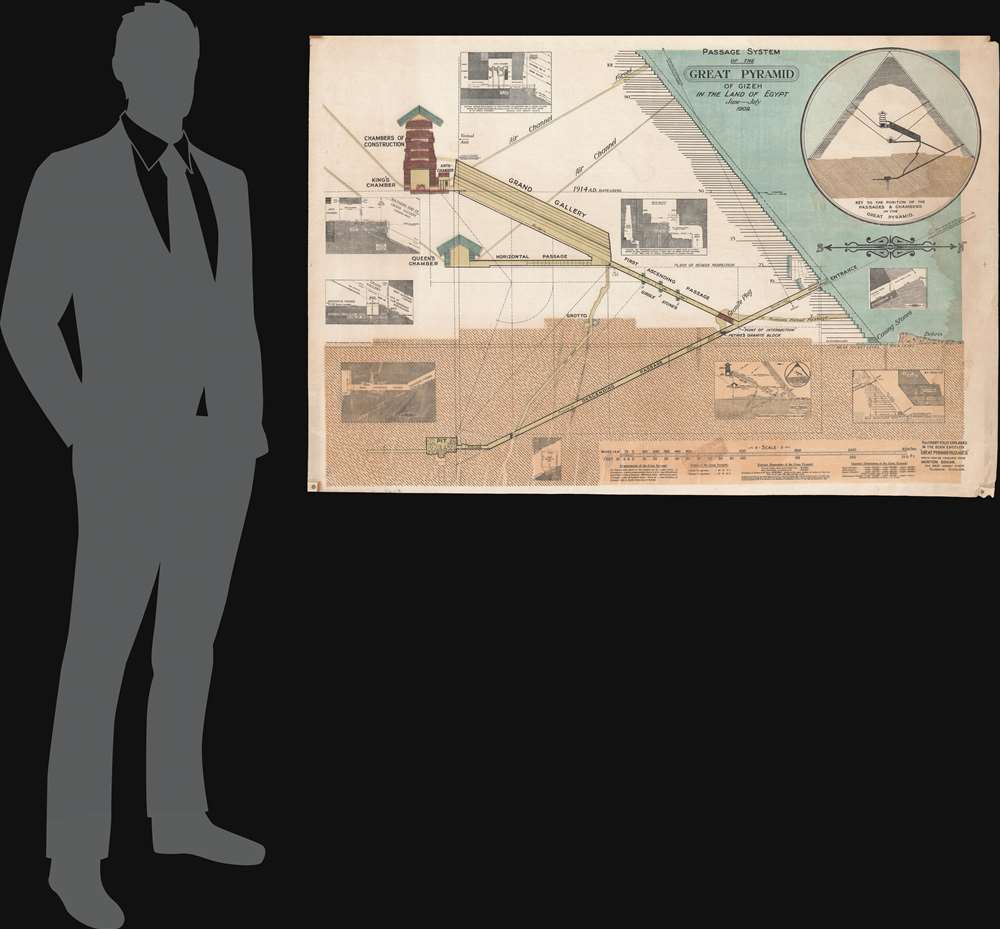 The Great Pyramid predicts the End of Days.

This is a c. 1910 monumental waxed linen banner illustrating the interior of the Great Pyramid of Giza, Egypt. The banner results from the 1909 studies of Morton Edgar and his brother John Edgar. Bother Edgars were dedicated pyramidologists who believed they could, through studies of the Great Pyramid, discern essential theological truths. Morton was obsessed with the theories of Jehovah's Witness founder Charles Taze Russell (1852 - 1916), who advocated the theory that the Great Pyramid was a mystical artifact deeply connected to the End of Days and the events predicted in Revelations.

Inside the Great Pyramid

The broadside presents a cross-section of the northern side of the Great Pyramid, detailing the complex network of passages, galleries, tombs, and air channels. It is rich with meticulous observations taken from both earlier archeological studies and Morton Edgar's own 1909 measurements. The image is mostly factual, offering a wealth of data regarding the interior passages of the Pyramid as well as their relationship to celestial bodies. The only direct indication of Edgar's more theological theories are notes regarding dating.

The Great Pyramid as Biblical Clock

Morton hypothesized that the interior of the Great Pyramid was an allegorical record of humanity from Creation, to his present age, to the predicted Second Coming and End of Days. Morton associates the ground level base of the Pyramid with the moment of Creation. The entrance represents Noah's flood. The passage descending from this point, correlates with rise of evil in the world from the Deluge onward. Exodus and the Ten Commandments are marked by the 'Point of Intersection' and what is labeled here as the 'First Ascending Passage'. This passage is the Old Testament of the Bible, including the 'Jewish Age' construction of the First and Second Temples, and the rise of Rome. The level of the Queen's Chamber thus represents the birth of Jesus Christ - what Morton Calls the Plane of Human Perfection. The Grand Gallery references the rise of righteous humanity, having been redeemed by the sacrifice of Christ. The King's Chamber is associated with the Second Coming, the End of Days, and the Events of Revelation. Morton argued that the ascent along the Grand Gallery to the King's Chamber marked 1914 years - thus predicting just five years hence, the ascension of Jesus Christ to the Throne of Heaven and the beginning of the Biblical 'Tribulation', a period of hardship presaging the End Times.

Pyramidology itself is a pseudoscience that evolved out of the research associated with the Napoleonic invasion of Egypt and the rise of near-eastern Orientalism that followed in its wake. This period also coincided with a collision of science and theology, leading to various reconciliationist movements to emerge, among them Theosophy, Christian Apology, and Pyramidology. In this last case, the emergence of Pyramidology can partially be attributed to the arrogance of the age. The 'discovery' of Ancient Egypt by Europeans in the late 18th and throughout the 19th century forced westerners to confront the staggering size and majesty of the Great Pyramid. It was difficult for many to accept that ancient pre-Christian civilizations could produce such wonders - especially one such as the Great Pyramid, which required mastery of advanced construction, engineering, architecture, astronomy, and more to plan and execute. Fringe groups thus began to associate the Great Pyramid with gods, giants, eastern sages, Atlantis, aliens, and more. The Pyramidology fad fell out of fashion in the 1960s, but is occasionally resuscitated by alternative history buffs.

While this banner is undated, a note in the lower right refers to the book, by both John and Morton Edgar, Great Pyramid Passages. This work was published around 1910 (the year of John's death) - hence only Morton's name on the imprint. The present banner's production style, on linen, underscores its purpose - for display to crowds at lecture tours promoting the books and Edgar's theories. This is the only known example of the full banner.

Morton Edgar (June 28, 1884 - February 6, 1950) was a Scottish amateur archeologist, and pyramidologist active in first half of the 20th century. Morton, along with his brother John Edgar (1862 - 1812), was a student of the pyramidologist Charles Taze Russell (1852 - 1916), who advocated the theory that the Great Pyramid was a 'Bible in Stone' - essentially a mystical artifact deeply connected to the End of Days and the events predicted in Revelations. John Edgar died in 1910, just as the book on pyramidology the brothers wrote together went to press. Morton went on to become a full-time public speaker, traveling extensively in Europe and the United States, promoting the pyramidology theories of the Edgar brothers. Learn More...


John Edgar (April 12, 1862 - June 9, 1910) was a Scottish surgeon, amateur archeologist, and pyramidologist active in the first half of the 20th century. John was born in Cathcart, Glasgow, Scotland. He was educated at the Langside Private Academy and took degrease in medicine at Glasgow University. He subsequently dedicated himself to midwifery and gynecology, becoming a known expert in these fields. For our purposes, John, along with his brother Morton Edgar (1884 - 1950), were students and promoters of the pyramidologist Charles Taze Russell (1852 - 1916), who advocated the theory that the Great Pyramid was a 'Bible in Stone' - essentially a mystical artifact deeply connected to the End of Days and the events predicted in Revelations. John Edgar died in 1910, just as the book on pyramidology he wrote with his brother went to press. Morton went on to become a full-time public speaker promoting the pyramidology theories of the Edgar brothers. Learn More...

Very good. Water stain right side. Some edge wear and damage to upper left and right corners where there were formerly grommets.
Looking for a high-resolution scan of this?