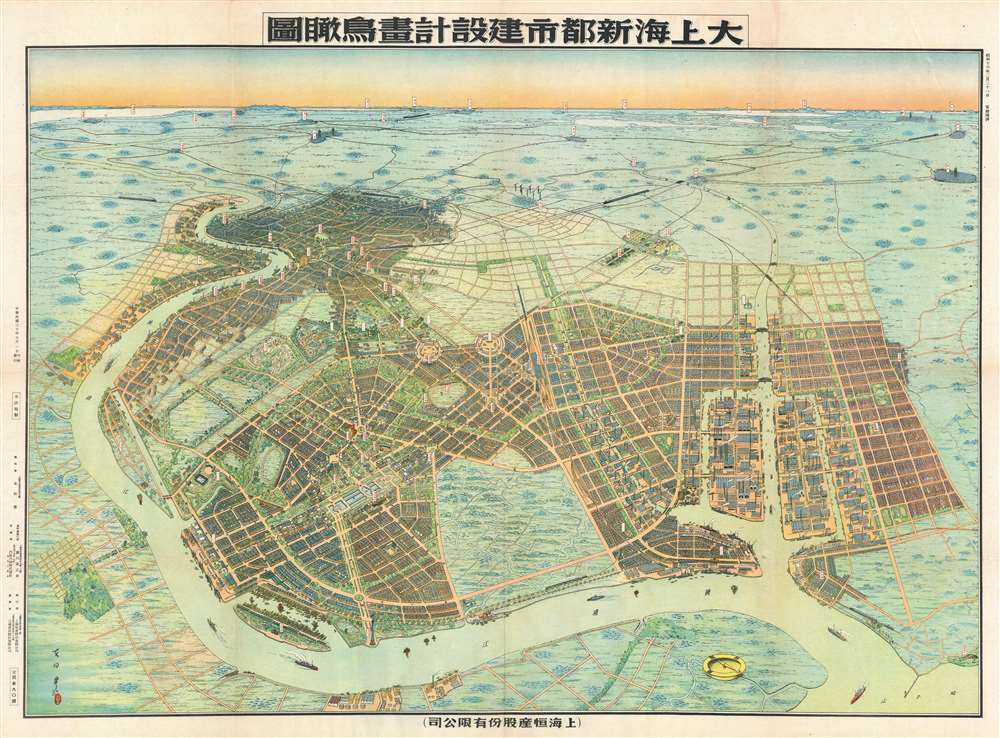 The Shanghai of tomorrow envisioned!

An outstanding 1941 / Minguo 30 / Showa 16 bird's-eye view map of 'Greater Shanghai', a massive-scale redevelopment of Shanghai proposed between 1927 and 1945. The view by Yoshida Feng (吉田豐) looks southward on Shanghai from an assumed highpoint above modern day Binjaing Forest Park, near where the Huangpu River empties into the Baoshan Waterway. The original intention of 'Greater Shanghai' was to replace the foreign-run concession zone with a larger spectacular new Chinese-governed city that would act as Shanghai's economic and political hub. In line with these values, Greater Shanghai, appearing in the foreground, presents a well laid out and commodious modern city, with an enormous port, monumental architecture, spacious gardens, and comfortable residential areas. By contract, the foreign concession area, appearing in the distance, seems diminished, small, and crowded.

In 1927 the Chinese Nationalist government conceived of a grandiose plan to build a new Shanghai downriver from the Bund and concession areas - called Greater Shanghai (大上海计划). They hoped Greater Shanghai would diminish the significance of the International Settlement and French Concessions in favor of the new fully Chinese-governed city. Their plan for the new city ironically followed the guidelines laid down in British urban planner Ebenezer Howard's 1902 book Garden Cities of Tomorrow and included broad park-lined avenues, enormous plazas, municipal lakes, and more. It also included a new government center, with imposing buildings surrounded by manicured gardens.

When the Japanese invaded Shanghai in 1937, they coopted the vision of Greater Shanghai, but put their own stamp on it with a new plan partially derived from the original. This they termed the 'Greater Shanghai Metropolitan Plan' (' 上海大都市计划). Development rights fell to the newly minted Japanese joint-stock company Shanghai-Hengshen Ltd. (上海恒產股份有限公司 / 恒产株式会社). The firm used war plunder to capitalize its development and construction operations. They brought in hundreds of Japanese immigrants to manage the Greater Shanghai construction project, constructing more than 100 garden houses in Wujiaochang (literally 'five corner plaza'), which here appears prominently as a large roundabout at center. Development of the new city proceeded on-and-off throughout the war but ended in 1945, when the Japanese were fully driven from Shanghai. Following the war, governance of the concessions reverted to Chinese authorities, negating the original purpose for Greater Shanghai. Although Shanghai did ultimately expand into these areas, the grand vision was replaced by more organic growth.

This view was commissioned by Yan Chuan of Hengsan Ltd. and drawn by the Japanese artist Yoshida Feng (吉田豐). It was printed in Tokyo by the Japanese firm Toppan (凸版印刷株式会社), which still exists. This view is rare. We have been unable to identify any other examples in any collection, public or private. The work does appear in a scarce Chinese-published catalog of views, but we have been unable to trace their source image.

Yoshida Feng (吉田豐, fl. c. 1900 - 1942) was a Japanese artist and viewmaker is the style of Yoshida Hatsu Saburo (吉田 初三郎). He is known to have produced two views of know, an 1835 view of Kyoto entitled 'City view of Osaka' (大大阪市市势大观) and a large-scale view of Shanghai entitled, 'Aerial view of the construction design of the new city of Shanghai' (大上海新都市建設計畫鳥瞰圖). Little else is known of his history, training, or life. Learn More...


Toppan Printing Company (凸版印刷株式會社, 1900 - present) was a printer and lithographic press founded in Meiji Japan in 1900 as Toppan Printing Limited Partnership. The founding of Toppen closely correlates to Meiji efforts to modernize Japan in the late 19th and early 20th centuries. The firm was formally reorganized with an influx of new investment in 1908, taking the name Toppan Printing Co., LTD (凸版印刷株式會社), which literally translates as 'Letterpress Printing Company,' reflecting the company's embrace of the then cutting edge Erhört letterpress method. By 1910, Japan had modernized to such an extent there was a growing need for brightly colored advertising, propaganda, touristic, and commercial printing. Toppen employee Gennojo Inoue split off from the firm to import color offset printing technologies from the United States and Europe, founding the Offset Printing Company in 1913. After four years of successful operation and growing market share, Toppen acquired the technologically superior company and reabsorbed Gennojo Inoue as an executive. Despite the Great Kanto Earthquake of 1923, Japanese efforts at modernization advanced rapidly. Between 1920 and 1929 the company's production and revenue grew dramatically. In 1920 or 1920 photomechanical printing was introduced to Japan, again by the efforts of visionary company president Gennojo Inoue. From the 1930s on, Toppen under Gennojo Inoue's guidance continued to grow, becoming one of the largest printing concerns in Japan. They established offices in other cities, including Osaka. In 1938, they built a large press factory, the Itabashi Plant, in Tokyo. During World War II the Toppen firm was utilized for the war effort, producing new currencies, bonds, government securities, and propaganda material. Following the war, Toppan was reorganized and continued to grow. It is today a major Japanese firm, diversified in multiple industries and traded on the Tokyo Stock Exchange. Learn More...

Very good. Slight wear on original fold lines.
Looking for a high-resolution scan of this?