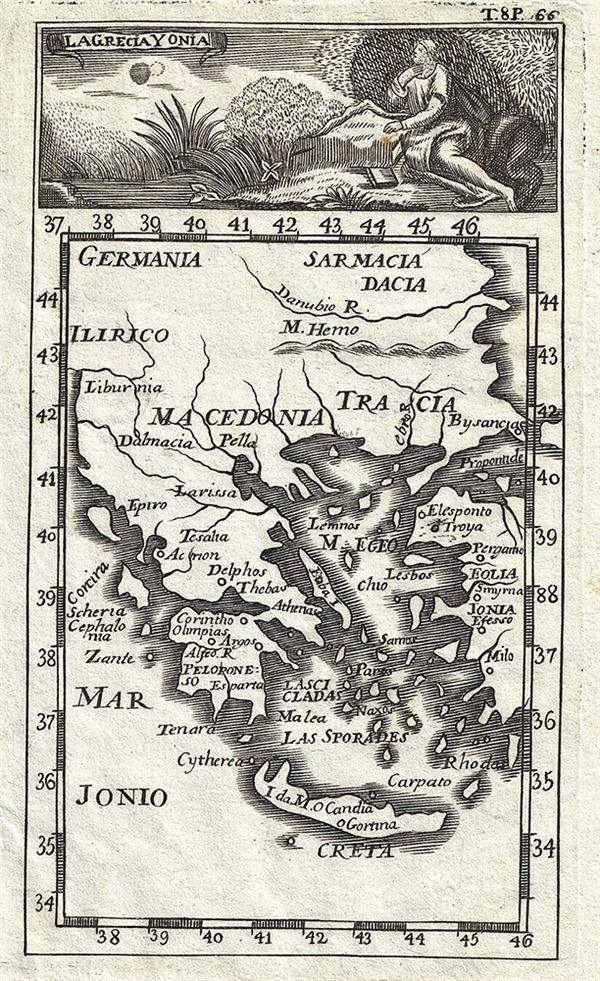 This is an appealing 1754 map of Greece and the Ionian Islands by Gabriel Ramirez. The map covers from Germania and Sarmatia to Crete and from Illyricum (in modern day Albania) east as far as the Sea of Marmara. The map identifies ancient Greek towns and regions, including Ionia in modern day Turkey.

Following the Battle of Corinth in 146 BC, the Greek peninsula came under Roman rule. The period from 31 BC and AD 180 in Greek history is described as the era of the Pax Romana. This was a period of peace and security when many Greek cities flourished, leading to cultural and economic progress. The classical period in Greek history, which lasted from the 5th century B.C. through the 4th century B.C. greatly influenced the Roman Empire's politics, art, architecture, philosophy and literature. After the fall of the Western Roman Empire, Greece became the center of the eastern Roman or Byzantium Empire.

A beautiful illustration is included at the top of the map. This map was originally prepared in French by Abbot M. Pluche and translated into Castilian Spanish for publication in Volume VII, Part 4 of D. Gabriel Ramirez's Espectaculo de la Naturaleza, O Conversaciones a Cerca de Las Particularidades de la Historia Natural.