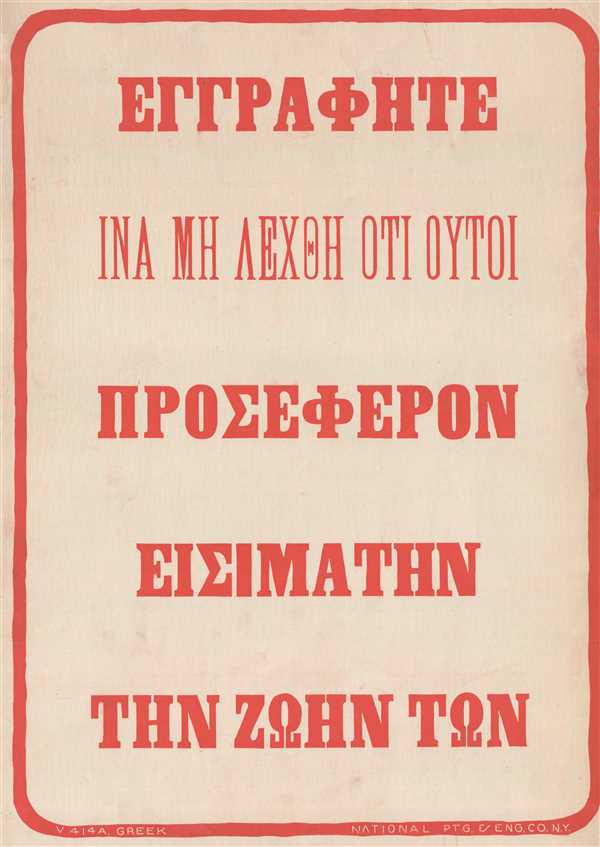 This is a c. 1917 National Printing and Engraving Company Greek broadside that is most likely associated with recruiting during World War I. Roughly translated as 'Enlist/Register so that it cannot be said that they offered their lives in vain'. Written in Katharevousa (καθαρεύουσα), a conservative form of Modern Greek conceived of as a compromise between Ancient Greek and Demotic Greek, due to the broadside's message, printing style, and the era in which the printer was active, we believe this broadside to date from World War I.

While researching this item, our research made us aware of the long history the Greek-Americans have with the United States military. Greek immigrants have served in every war fought by the United States, from the American Revolution to today's wars in Iraq and Afghanistan. Several thousand Greek-Americans served in the Allied Expeditionary Force sent to Europe during World War I, including George Dilboy, who was killed in action near Belleau, France on July 18, 1918 and was posthumously awarded the Congressional Medal of Honor for 'gallantry and intrepidity beyond the call of duty'. During our research, however, we became aware of the fact that Greek-Americans not only fought in the wars of their adopted nation, but those of their native homeland as well. Greek immigrants and Greek-Americans returned to Greece to fight in the Greek-Turkish War of 1897 and the Balkan War of 1912-1913. Due to the ambiguous nature of the text, and the formal nature of the language, this leaves open the possibility that this broadside could, in fact, have been printed to encourage Greeks to return to their homeland and fight against the Turks in defense of Greece's freedom. Several thousand returned to Greece to fight in these wars, particularly from large urban areas, such as Chicago.

This broadside was printed by the National Printing and Engraving Company of New York, Chicago, and St. Louis in the early 20th century, most likely during 1917 or 1918 in support of the American war effort during World War I.

The National Printing and Engraving Company of New York, Chicago, and St. Louis (fl. c. 1870 - 1920) was a prominent poster printer active from the late 19th century into the beginning of the 20th. Advertisements promoting their services were placed in major publications across the country.

Very good. Backed on linen, poster style.
Looking for a high-resolution scan of this?