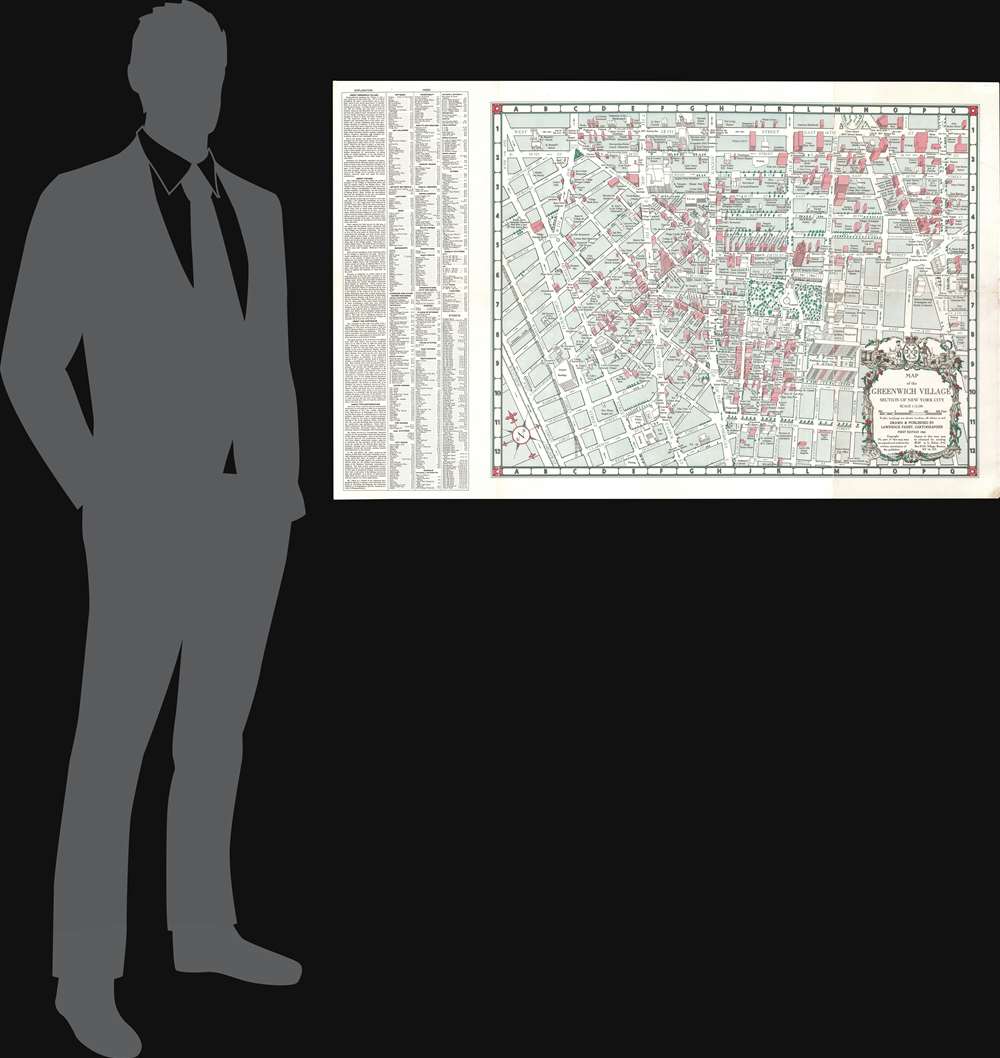 This is a 1960 first edition Lawrence Fahey pictorial city plan or map of Greenwich Village, New York City. When this map was issued, Greenwich Village was the heart of the New York bohemian arts scene; the time and place of Bob Dylan, Allen Ginsberg, Andy Warhol, The Velvet Underground, protests against the Vietnam War, and the Stonewall Riots.

Coverage extends from 9th Avenue and Gansevoort Street to 3rd Avenue and from 14th Street to Prince Street. Fahey uses a 'modified perspective projection' to draw the buildings, nearly all of which are drawn to scale. In some cases, when the building would have obscured others, or its size would have caused undue attention, Fahey elected not to illustrate the entire building. The map labels antique shops, bars, theaters, bookshops, schools, and restaurants, among other businesses. Washington Square Park and New York University appear to the right of center, and the law school, education buildings, and the Maison Francaise are among the buildings labeled. Of note, the cartouche design is borrowed from Bernard Ratzer's celebrated 'Plan of the City of New York in North America' published in 1776.

Fahey includes a detailed description of the map to the left of the index. Here he details his processes and states that he spent three and a half years undertaking surveys and compiling this work. He states categorically, 'With very few exceptions, every important place in the Village is depicted on the map,' and closes with the thought that 'the map was not designed, however, to take the adventure out of exploring the Village for yourself, but to help you along the way.'

Lawrence Fahey (October 20, 1924 - April 27, 1994) was an American cartographer. Born in Albany, New York, Fahey received his first training as a cartographer while serving in the Army Map Service during World War II, where he copied maps to 'exacting military standards'. Fahey also taught topographic drafting at the Army Engineer School in Fort Belvoir, Virginia during his time in the U.S. Army. After he was discharged from the Army, Fahey worked for several different commercial map firms. He attended Clark University from 1948 until 1952, when he received his Bachelor of Arts degree in Geography. Fahey also worked as a Cartographic Research Analyst for the Aeornautical Chart and Information Center in Washington, D.C., where he researched source material for aeronautical charts. During his tenure at the Aeronautical Chart and Information Center, Fahey also helped construcgted a globe eight feet in diameter for the Secretary of the Air Force. He attended Ohio State University's Institue of Geodesy, Photogrammetry, and Cartography in the mid-1950s and received an MA degree in Geography. After graduating from Ohio State, he returned to New York and compiled a team of twenty-five to create special maps for the national fund-raising campaign for the Muscular Dystrophy Association of America. He worked for Oxford University Press in England from 1963 until 1965, when he became chief cartographer for the Organization of American States (OAS). He worked for the OAS until he retired in 1976, when he started his own firm, Meridian Maps. Meridian created maps under contract and also for government agencies. Fahey also talk cartography at George Washington University in the early 1970s. He was married to his wife Graciela Laura Fahey, with whom he had two children. Learn More...