1854 Meyer Map of Greece and the Archipelago 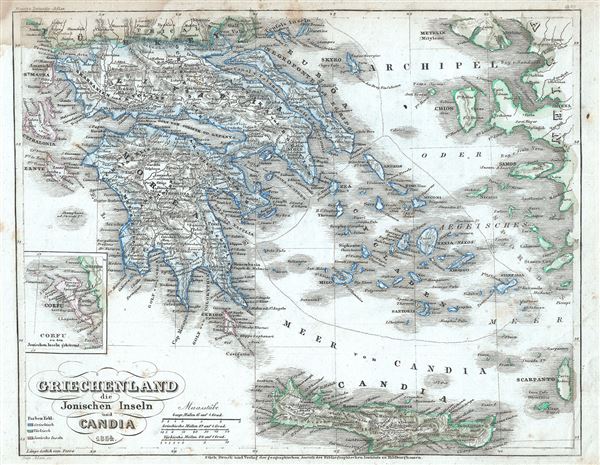 1854 Meyer Map of Greece and the Archipelago

This is a beautiful 1854 map of Greece and the Archipelago by Joseph Meyer. It covers Greece from the Ambracian Gulf south as far as Crete or Candia and includes the Ionian and Aegean Islands. An inset near the left border features Corfu and its surrounding islands. Numerous cities, rivers, islands, and other topographical features are noted throughout.

This map depicts the waning years of Ottoman hegemony in the region, with the Greek Independence movement attaining Peloponnesian sovereignty in 1821. The Ionian Republic, under the protection of Great Britain, was also free of Ottoman control. The other Grecian and Balkan states, including Serbia, Croatia, Moldavia, Wallachia, Albania, and Macedonia, remained at least nominally under Ottoman control until 1878.

This map was issued as plate no. 80 in Meyer's Zeitung Atlas. Although all the maps in this atlas are not individually dated, the title page and maps were often updated while the imprint with the date was not, causing confusion to the exact date for some of the maps. Moreover some maps in the atlas were taped in at a later date as an update to the atlas. We have dated the maps in this collection to the best of our ability.