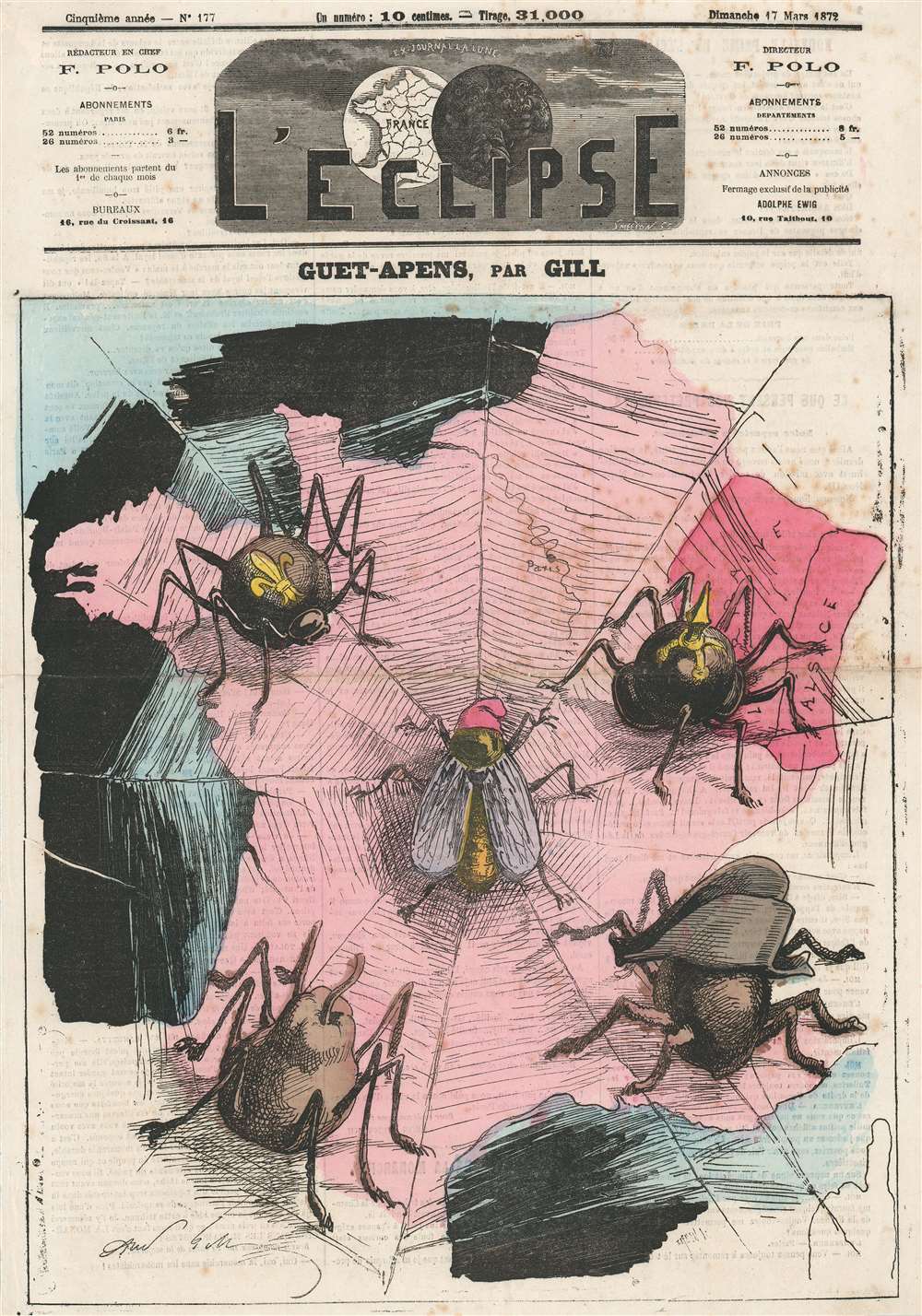 This is an 1872 André Gill political cartoon map of France after the fall of the Paris Commune. France appears as a gigantic spider's web, with the fly at the center representing the communards, identifiable by the symbolic red Phrygian cap. Four spiders surround the fly, apparently poised for attack. The spider on the top left represents the French government, then the Third Republic, identified by the fleur-de-lis. Proceeding clockwise, the next spider wears the iconic Prussian Pickelhaube, represents Germany and stands astride Alsace and Lorraine, two French provinces that Germany annexed after their victory in the Franco-Prussian War. The spider in the lower right corner represents the exiled French Emperor Napoleon III, who was captured by Prussia during the Franco-Prussian War. The fourth 'spider,' which is, in fact, a pear with spider's legs, represents the Royalists. The pear was the preferred symbol for the 'rotund' Louis-Philippe, the last French king.

The Paris Commune governed Paris from March 18, 1781 until May 28, 1871. It was a radical socialist, anti-religious, and revolutionary government that emerged from the chaos of the siege of Paris during the Franco-Prussian War. After controlling Paris for two months, the regular French Army suppressed the uprising in what has become known as 'The Bloody Week' (La semaine sanglante). 6,667 people Parisians were confirmed to have been killed during that week, but unconfirmed estimates place the death toll somewhere between 10,000 and 20,000. 877 regular French army soldiers were killed.

This cartoon was drawn by André Gill and published as the front page of the March 17, 1872 edition of L'Éclipse, one year after the founding of the Commune. An example is part of the P.J. Mode Collection of Persuasive Cartography at Cornell University, and another example is part of the collection at the Musée Carnavalet in Paris.

André Gill (pronounced Geille) (October 17, 1840 - May 1, 1885) was the pseudonym of Louis-Alexandre Gosset de Guines was a French painter, satirist, and caricaturist. Born in Paris, his first were published in the Journal amusing in 1859. His work was published in several satirical newspapers, including Le Charivari, La Lune, and L'Éclipse, as well as in newspapers he founded, such as Gill-Revue, La Parodie, La Lune Rousse, Les Hommes d'aujourd'hui, La Petite Lune, and L'Esclave ire. His caricatures were considered accurate and not cruel, and thus many of his famous contemporaries consented to being drawn by him. These include Émile Zola, Victor Hugo, Otto von Bismarck, Sarah Bernhardt, Richard Wagner, and Charles Dickens. Napoleon III, however, disliked the portrait Gill drew of him. Gill soon gained fame in the Bohemian world of Paris, and met such figures as Paul Verlaine and Arthur Rimbaud. Gill was named curator if the Musée du Luxembourg on May 15, 1871, but never truly got to settle in to the position because the Paris Commune erupted shortly after he started. Gill became involved with the Commune, and, after the Commune was put down by the French government, gave up being a caricaturist to avoid the scandal. Instead, he started Impressionist painting. Gill was also an entertainer who frequented at the Paris nightclub the Cabaret des Assassins. This same nightclub became famous under the name Lapin Agile. Gill is remembered as the artist who created the sign that suggested the name change. Gill's painting featured a rabbit jumping out of a saucepan, which locals began calling Le Lapin à Gill, which soon became the Lapin Agile. We have been unable to determine whether or not Gill was married, but we do know that he had a son who died in infancy in 1881. Not long after, Gill suffered a mental breakdown and was hospitalized after friends found him errantly wandering the streets of Brussels. He spent the next four years in and out of asylums, and died in Paris in 1885. He is buried in Père Lachaise cemetery. Learn More...