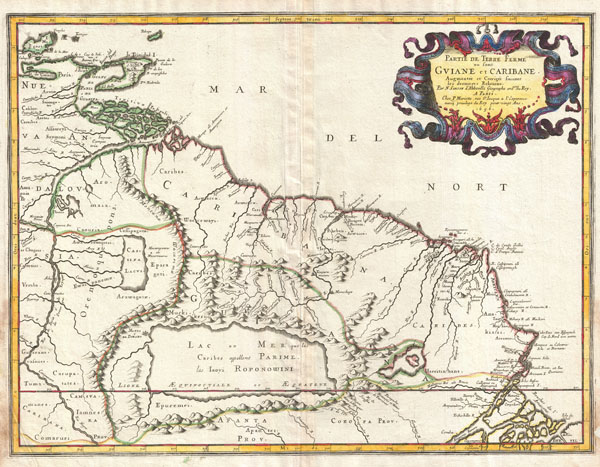 Rare 17th century map showing the route to El Dorado and one of the first maps to show definate political borders in this region.

This is N. Sanson's remarkable 1656 map of the northwestern parts of South America , Lake Parima (Parime), and the route to El Dorado. Cartographically this map is loosely based upon cartographic conventions established by De Laet, however, Sanson introduced some interesting new ideas, including some of the first fixed political borders in this region. The map covers fro Isla Margarita and the Orinoco Delta eastward as far as Tampico and southwards as far as the mouth of the Amazon River.

This part of South America generated considerable European interest in the early 17th century following the publication of Sir Walter Raleigh's fascinating 'Discovery of the Large, Rich, and Beautiful EMPIRE Of GUIANA .' Raleigh's expedition traveled down the Orinoco River in search of the Kingdom of El Dorado. Today we know that El Dorado did not exist, but was rather an amalgam of very real tribal traditions and the European lust for gold. Nonetheless, in the 16th century, tales of El Dorado were common conversation along the port cities of the Spanish Main. Having explored a considerable distance down the Orinoco, Raleigh's expedition found itself mired in a remote tribal village at the onset of the rainy season. While waiting for an opportunity to return up the Orinoco, a trading delegation arrived. At this time the dominate trading empire in the Amazon were the Manoa, who, though based near modern day Manaus, pursued trade routes from the foothills of the Andes to the Amazon and Orinoco Deltas. While the rainy season prevented Raleigh from moving forward, for the Manoa it had the opposite effect, for it inundated the vast Parima flood plain creating a great inland sea, consequently opening an important trade connection between the Amazon and Orinoco Rivers. When the Manoa arrived, Raleigh and his men noticed that they had various golden trinkets for trade. This was apparently enough for Raleigh to deduce that they must indeed be from the hidden kingdom of El Dorado. When Raleigh asked where the traders came from, the locals, with no common language with which to engage Raleigh, could only explain that they traveled across a great water and were from Manoa. Raleigh's presumptuous narrative inspired many early cartographers to map this massive lake, with the city of El Dorado or Manoa on its shores, in the unexplored lands between the Orinoco and Amazon River basins.

Sanson's map is also one of the first to introduce definite political boundaries to this region. Earlier maps had several loosely established regions bounded by mountain ranges, rivers, and other natural borders. These included Guiana, Nueva Andalusia, and Caribana. Sanson codifies these more firmly and made a couple of interesting innovations. The most important is the border that follows the course of the apocryphal Wacarima mountain range (which probably refers Raleigh's sighting of Venezuela's great Tepuis) which runs on north-south axis east of the Orinoco. Sanson extends the range to meet the Orinoco at the mouth of the Delta, however, he departs from this range to extend the political border slightly to the east. This curious decision most like refers to the point at which Spanish navigators traveling north along the Orinoco turned west, heading for the Gulf of Paria in an attempt to avoid the dangers and difficult to navigate Orinoco Delat. In drawing this important line, Sanson sets firm limits to Spanish dominance in the region. West of this line are the known lands of Nova Andalusia, but to the east, the indigenous Caribes, Muckikeri, and Harritianhans reign supreme. Curiously Sanson chooses to ignore known Dutch settlements along the Surinam and Essekebe Rivers. By leaving out the Dutch lands, Sanson may have been seeking favor with the French crown. In omitting all European settlement east of the Wacarima, Sanson is able to make the claim that these lands are available for European, or more specifically, French conquest and settlement. Accordingly, the French are known to have begun settling this region around the same time this map was printed. In later 18th century maps by De L'Isle, Vaugondy, Anville, and others, Sanson's mapping conventions would be copied and, to this day, influenced the establishment of the Venezuela - Guyana border.

Mallet-Prevost, Severo, Report and Accompanying Papers of the Commission Appointed by the President of the United States to Investigate and Report Upon the True Divisional Line Between the Republic of Venezuela and British Guiana, 'Report Upong the Carotgraphical Testimony of Geographers', 1897, Vol 3, pages 22-30. Pastoureau, Mireille, Les Atlas Francais, XVIe-XVIIe Siecles: Repertoire Bibliographique et Etude, Sanson, V-A, 92.
Looking for a high-resolution scan of this?