1780 Bellin Map of the Guinea Coast of Africa, from Guinea-Bissau to Angola 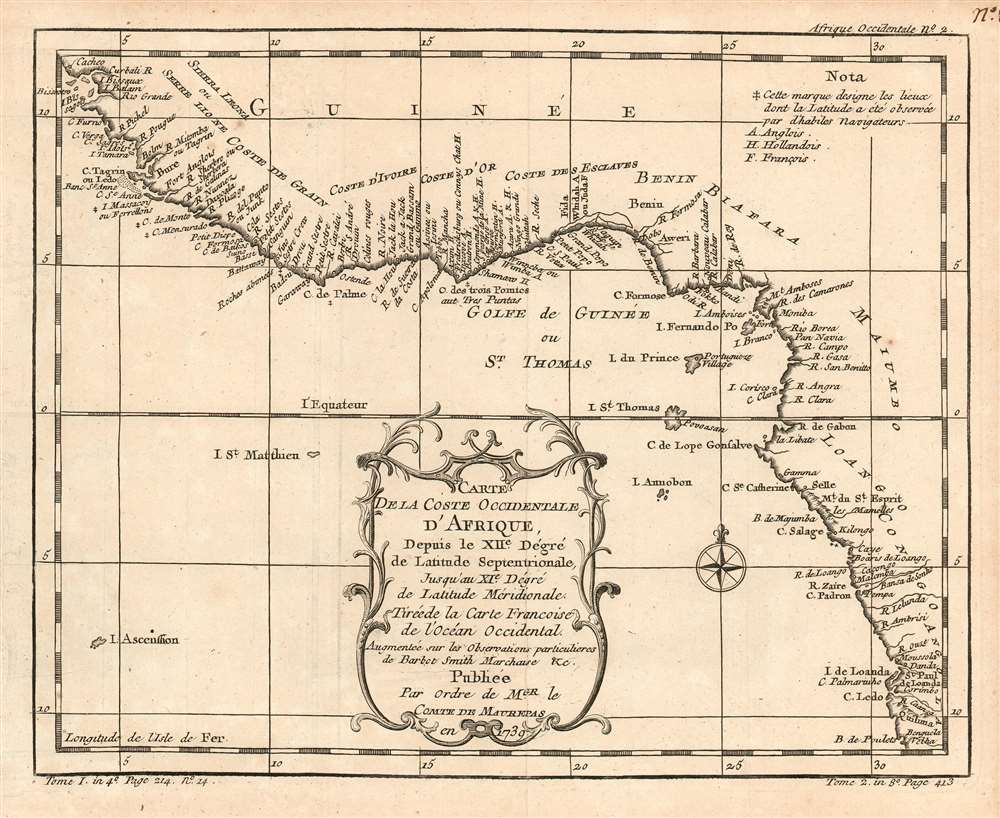 1780 Bellin Map of the Guinea Coast of Africa, from Guinea-Bissau to Angola

This is a 1780 Bellin map of the Guinea Coast of west Africa, from what is now Guinea-Bissau as far south as the northern coast of Angola. The map therefore includes, and indeed labels, the regions by resources extracted during the age of discovery and exploration. Revealed on the map are the Coste de Grain, the Coste d'Ivoire, the Coste d'Or, and the Coste des Esclaves. The map includes notations indicating places whose latitudes had been observed by 'skilled navigators,' and includes a letter-key showing trade forts - including the infamous Castel de la Mina - belonging respectively to the English, the Dutch, and the French.

For his sources, Bellin makes mention of his own superb 1739 chart of the southern Atlantic Ocean, Carte Reduite de l'Ocean-Meridional, produced 'Par Ordre' of the Count de Maurepas. He also notes that the chart is 'augmented with the particular observations of Barbot, Smith, Marchaise etc.' These, then, are the sources for the details of the trade forts, which do not appear on the 1739 chart.

Bellin based this 1780 chart on an intermediate work, produced by the English mapmaker Thomas Kitchin in 1759. A cursory translation of the title of that work is revealing:

A chart of the western coast of Africa, from the twelfth degree of latitude north to the eleventh degree south, with the adjacent islands : drawn from the French chart of the Western Ocean published in 1738, by order of the Count de Maurepas ; improved from particular surveys publish'd by Barbot, Smith, Marchaise and others.

So it would appear that Bellin's 1780 map is copied from Kitchin's 1759 map, whose geographical information is based on Bellin's 1738 map.

The map was included in Harpe's 1780 abridged edition of Prévost's Histoire générale des voyages. This map appears on the market from time to time, but OCLC lists only two copies of the separate map (at the Bayerische Staatsbibliothek, and the Universitatbibliothek LMU Munchen) although inconsistencies in cataloguing mean this number may be higher. Prévost's Histoire and Harpe's abridged version of it are well represented in institutional collections.