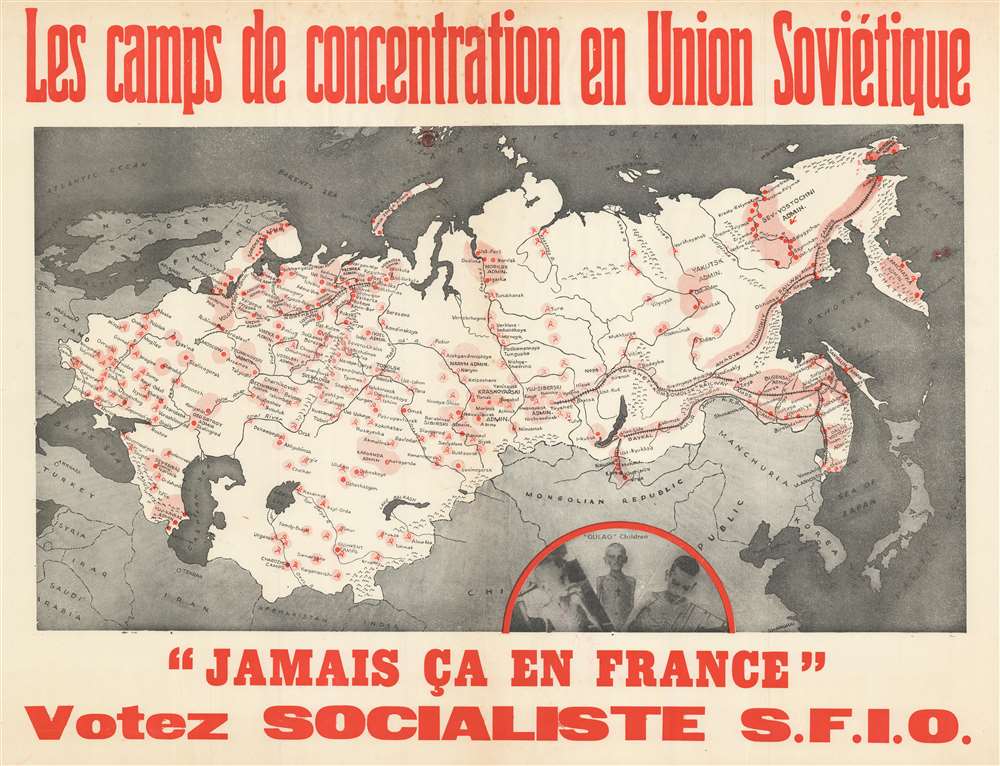 This is a c. 1951 Section française de l'Internationale ouvrière (French Section of the Workers' International) campaign propaganda poster of the Gulag labor and prison camp network in the Soviet Union. The map depicts the Soviet Union from the Baltic Sea to the Bering Strait, highlighting in red the location and extent of the Soviet Russian forced labor camps. The Soviet hammer and sickle mark locally administered camps, while the red dots mark camps under centralized control. The lighter red shades broader forced labor regions.

Perhaps the most widely circulated piece of anti-Soviet Cold War-era propaganda, this is not the first iteration of a Western map of the Gulag network. That work is credited to Polish soldiers Sylvester Mora and Pierre Zwierniak, who created a map to accompany their 1945 book Sprawiedliwość Sowiecka [Soviet Justice].

The present map goes far beyond Mora and Zwierniak's work. Influenced by Mora and Zwierniak's work, a committee of the AFL-CIO (backed by the CIA) commissioned Don Levine, a Russian-American journalist, to create a map that detailed the Gulag network with much more precision. Levine's final product (the central map presented here) first appeared in the September 17, 1951 issue of TIME. Subsequent, separately issued posters were published later, and the central map was distributed around the world. Per the P.J. Mode Collection of Persuasive Cartography at Cornell University, 'thousands of copies were distributed in Latin America (in Spanish) and in Europe (in German, French, and other languages).'

This map was published c. 1951 by the Section française de l'Internationale ouvrière. It is not cataloged in OCLC and is not part of the P.J. Mode Collection at Cornell. We have found only a handful of other instances when it appeared on the private market.

Isaac Don Levine (January 19, 1892 – February 15, 1981) was an American journalist. Born in Russia, Levine came to the United States in 1911. After finishing high school in Missouri, he began working for The Kansas City Star and then The New York Herald Tribune. He covered the Russian Revolution of 1917 for the Tribune and the Russian Civil War in the 1920s for The Chicago Daily News. He was a columnist for the papers of Hearst papers during the 1920s and 1930s. In 1939, Levine collaborated with famed defector Walter Krivitsky, a chief of military intelligence. Levine was the ghostwriter for a series of articles penned by Krivitsky about Stalinist Russia and his escape. Levine served the editor of Plain Talk, an anti-Communist magazine, from 1945-1950. He also played a role in the case against Alger Hiss, a State Department employee, who stood accused of being a Communist courier. Learn More...