1765 Bonne Map of West Africa, the Gulf of Guinea, and Benin 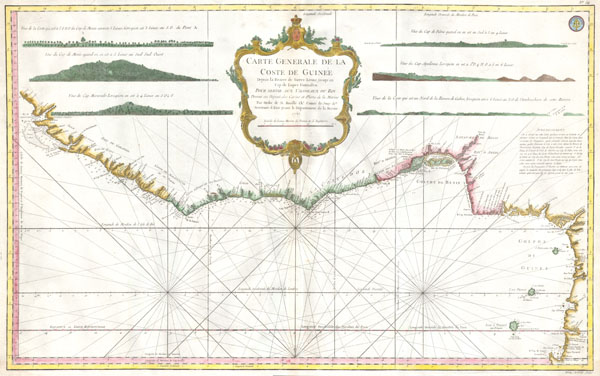 1765 Bonne Map of West Africa, the Gulf of Guinea, and Benin

This is a rare and attractive 1865 J. N. Bellin nautical chart or map of West Africa. Depicts the African coast from Sierra Leone south past the Bay of Benin and the Gulf of Guinea to Cape Lopez. This roughly consists of the modern day nations of Guinea, Sierra Leone, Liberia, Ivory Coast, Ghana, Togo, Benin, Nigeria, Cameroon, Equatorial Guinea, and Gabon. Offers superb costal detail with most major ports, and rivers listed. Depth soundings dot the coast and rumb-lines fill the sea. To the left and right of the decorative central title cartouche there are eight coastal views. Prepared by Jacques Nicholas Bellin for issue in 1865 by the French Depot de la Marine.

Phillips (Atlases) #587.
Looking for a high-resolution scan of this?