1849 Meyer Map of the World in Hemispheres 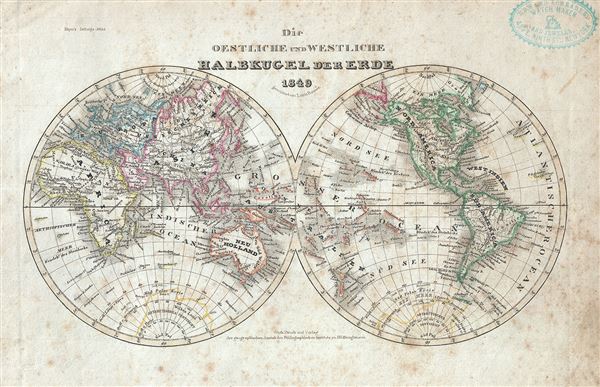 1849 Meyer Map of the World in Hemispheres

This is a fine 1849 map of the world depicted in hemispheres by Joseph Meyer. Both the Western and Eastern Hemispheres are drawn and offer a fascinating snapshot of the world during a period of rapid globalization and discovery. Africa and Australia are largely unmapped in the interiors with coastlines accurately rendered. The coast of Antarctica is drawn in sketchily, based upon early expeditions. The map is color coded according to continents. Various important cities, rivers, islands, mountain ranges, and several other topographical details are noted with relief shown in hachure.

This map was issued as plate no. 1 in Meyer's Zeitung Atlas. Although all the maps in this atlas are not individually dated, the title page and maps were often updated while the imprint with the date was not, causing confusion to the exact date for some of the maps. Moreover some maps in the atlas were taped in at a later date as an update to the atlas. We have dated the maps in this collection to the best of our ability.

Good. Overall toning. Foxing throughout. Rubber stamp impression in top right quadrant.
Looking for a high-resolution scan of this?