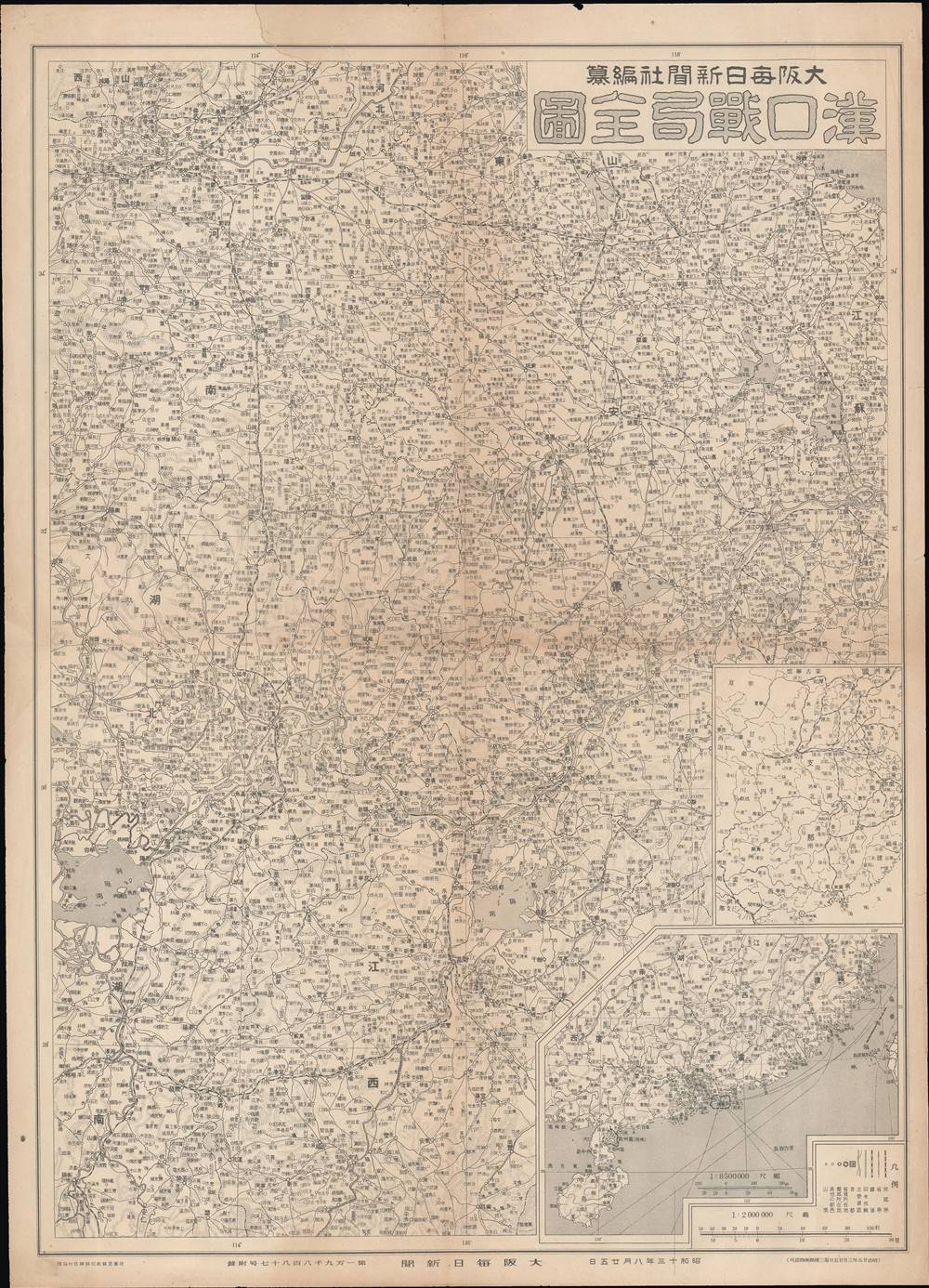 One of the most consequential battles of the Second Sino-Japanese War.
$350.00

This is a 1938 map of the Battle of Wuhan in the Second Sino-Japanese War (1937 - 1945) theater of World War II (1939 - 1945). It was published for the Japanese news daily, the Osaka Mainichi Shimbun. It covers much of central and southern China, particularly near the Yangtze River, in great detail; the battle raged over this area for much of the summer and autumn of 1938, resulting in a pyrrhic Japanese victory.

This map shows the terrain of the Battle of Hankou (漢口; Hankow in contemporary sources, now part of Wuhan). Despite the name of the battle, it was in fact a wide-ranging campaign that spilled far beyond the city (at left-center), covering portions of six Chinese provinces.

The map is extremely detailed, providing the names of a sea of small towns and villages. Just prior to the battle, Japan had entered a total war footing with the National Mobilization Law and called up conscripts. A home audience, especially those with family members at the front, would have been anxious to follow recent developments and have some sense of the places mentioned in the (tightly censored) news.

The legend shows political boundaries, roads, railways (complete and under construction), and major cities. An inset map (1 : 8500000) shows the southern Chinese coast, including Hong Kong and the French Concession of Guangzhouwan marked out with dotted lines. After Japanese troops seized Guangzhou and other coastal cities, these territories and the Kunming-Haiphong Railway became essential routes for smuggling supplies to Chinese forces.

Although determined to resist the Japanese, Chiang was eager to eliminate the domestic threat from the Communists first while also buying time to modernize his armies and gain better control over his generals, most of whom were semi-independent warlords. These plans were disrupted when Chiang was kidnapped by one of his own generals in December 1936 and forced to enter a united front with the Communists. Now compelled to turn his attention towards Japan, it was a matter not of if but when a war would come.

After their rapid victories at the start of the war, Japan was at an impasse. Years of military modernization and propaganda had laid the groundwork for the successful first phase of the war, but Japan simply lacked the resources and manpower to occupy the vast territory of China. It was hoped that further victories and capture of major cities would force Chiang to surrender, and so Japanese armies took city after city along the coast and down the Yangzi River. For its part, China had scored a surprise victory at the Battle of Tai'erzhuang, slowing Japan's advance, and engaged in grand-scale scorched earth tactics, most famously blowing up the dikes on the Yellow River, flooding thousands of kilometers of land, killing several hundred thousand civilians and Japanese troops, and restricting the possible paths of Japanese advance.

Chiang set up a temporary headquarters in Hankou while preparations were made in Chongqing. Japanese commanders hoped that another major victory would demoralize Chinese forces to the point that Chiang would surrender. With the extra time provided by the Yellow River floods, Chiang prepared a defense of Hankou and the wider middle Yangtze region. In June 1938, the Japanese began their attack in earnest, quickly capturing Anqing, Jiujiang, and several strategically important railways. However, they ran into increasingly stiff resistance as the campaign wore on, while also contending with guerilla attacks and surprise counter-attacks deep behind the front line. A campaign was also launched to cut off Chiang's supplies by invading and occupying Guangzhou, which diverted resources from the main battle near Wuhan.

In the end, preparations for the campaign and the battle itself lasted for much of 1938 and ranged over hundreds of kilometers. Although Japanese forces took Wuhan and Guangzhou, the fighting had been costly and had failed to force Chiang to surrender. Indeed, the Chinese side achieved its main objective of buying time to prepare for a long-term defense from Chongqing. After the battle, both sides hunkered down and the war shifted towards a stalemate, with smaller-scale local campaigns, guerrilla warfare, and diplomatic maneuvering. Japan's desperation at cutting off Chiang's supplies eventually led them to occupy French Indochina, which further soured relations with Western powers, setting the course that would end in the Pearl Harbor attack and Japan's invasion of Southeast Asia in December 1941.

This map was published as an addendum to the Osaka Mainichi Shimbun on August 25, 1938 at the height of the Battle of Wuhan. A note at bottom-left mentions HB printing plates, which appears to refer to Huebner and Bleistein, a company from Buffalo, N.Y. that patented steel plate print technology in 1923 and exported it to Japan. The map is held by Cornell University, Harvard University, the Nichibunken (International Research Center for Japanese Studies), and the Chinese University of Hong Kong. It is scarce to the market.