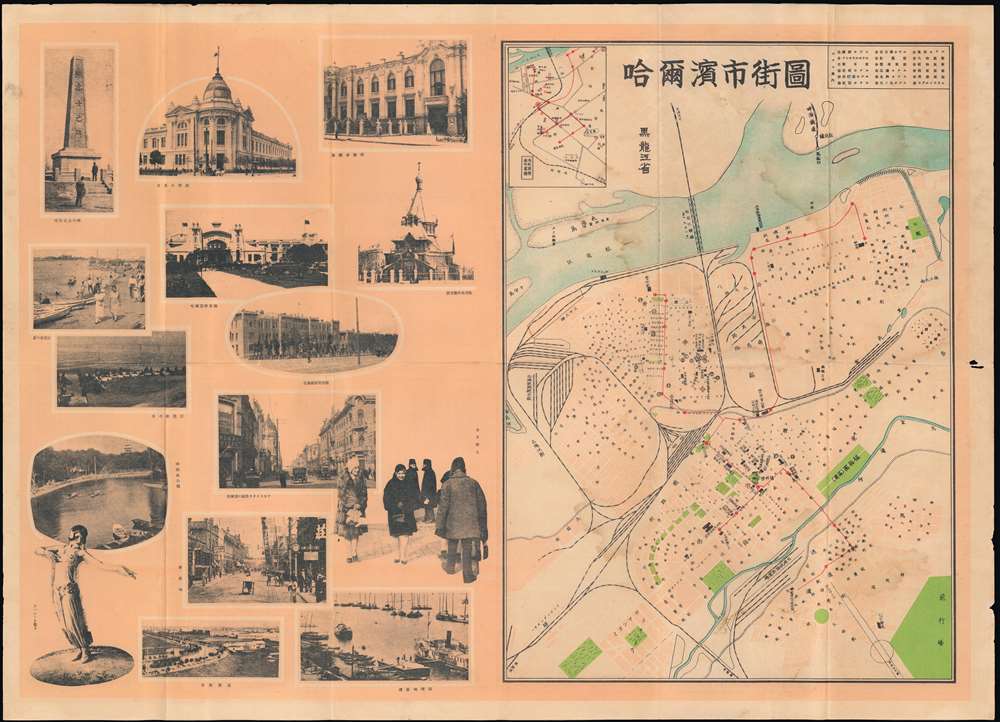 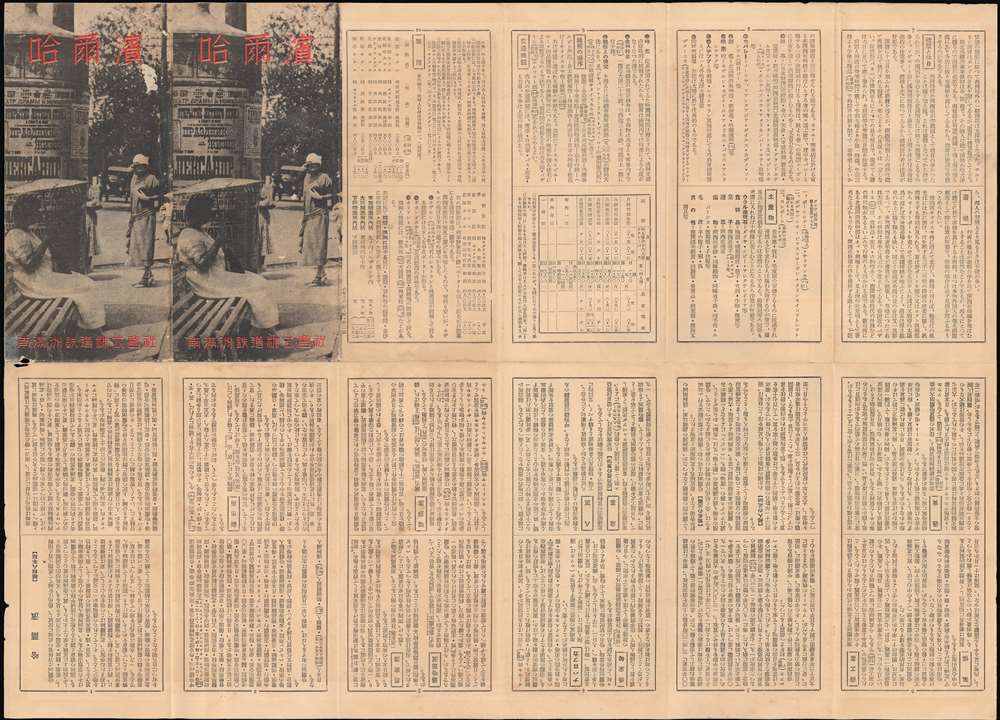 This is a very rare 1933 South Manchuria Railway Company (Mantetsu) map of Harbin, China. It combines practical information and propaganda soon after Harbin and the rest of Manchuria were incorporated fully into Japan's empire. The map is a guide for Japanese business travelers and tourists, focusing particularly on the urban districts of Nangang (南崗, 新市街), the Docks (埠頭區), and areas along the Sungari River (松花江).

The Japanese puppet state of Manchukuo (滿洲國) was established in March 1932 following the September 1931 Japanese invasion of Manchuria. Afterwards, the Japanese military and its allies in the Manchukuo Imperial Army faced an active insurgency involving a range of units, from regular Chinese troops affiliated with various warlords and the national government in Nanjing, to scattered guerillas and bandits operating independently. The inset map shows the location of 'inspection points' (市街視察箇所略圖) throughout the city, attesting to the tense security situation.

Less dramatically, the legend at top-right provides a list of hotels in the city with numbers corresponding to points on the map, while the verso provides additional information on several hotels, their amenities, and additional fees for Western or Japanese style rooms. At left are photographs of sites in the city, including a monument to Japanese shishi (rebels against the Tokugawa Shogunate and leaders of the Meiji Restoration) and a Japanese elementary school at top-left. The text on the verso is part historical chronicle, part factbook for business purposes, and part travel guide, providing information ranging from the origins of local place names to the estimated price of travel between popular areas of the city by taxi, bus, carriage, or streetcar.

Harbin's history as a major city can be traced to the construction of the China Eastern Railway by Tsarist Russia, following the granting of a concession from the Qing government in 1896. The railway provided a shortcut through Chinese territory between Chita and Vladivostok, an alternative to the long route through Russian territory on the Trans-Siberian Railway and provided a basis for further railway construction in China, especially southwards to Port Arthur, another Russian concession gained in 1897. Harbin became the meeting point of these branches of the China Eastern Railway and quickly attracted a range of migrants from throughout the Russian Empire, including several thousand Russian Jews escaping persecution. This was also a period when Han Chinese migration to Manchuria intensified, and the Chinese population of Harbin increased accordingly.

As a city built on a concession, far from any imperial capital, Harbin was similar to the treaty ports further south in China, such as Shanghai, defined by light administration, a cosmopolitan mix of cultures, and the pursuit of both profit and pleasure. The picture at bottom-left enjoins the reader to 'come see the cabaret' and another photograph at left-center shows Ginza Kitaiskaya (哈爾濱の銀座キタイスカヤ), 'Harbin's Ginza,' the longest pedestrian street in Asia and the city's main shopping district. During and after the Russian Revolution, tens of thousands of white Russians escaped to Harbin, becoming stateless. The Japanese population increased after the Russo-Japanese War (1904 - 1905) and especially after Japan's 1931 invasion of Manchuria, after which the Russian population declined, with many going to Shanghai. The text on the verso gives an estimate of the city's population at the time of production: 10,400 Japanese (5,100 from the home islands and 5,300 Koreans), 30,000 'Soviets,' 34,000 stateless people (largely white Russians), 300,000 Manchukuo citizens, and 4,000 others.

Harbin's history from the start was linked with railways, as evidenced by the density of rail lines, rail yards, and railway offices throughout the city. The Treaty of Portsmouth that ended the Russo-Japanese War granted to Japan, among other rights, the southern section of the China Eastern Railway, from Changchun to Port Arthur, which became known as the South Manchuria Railway. The northern section of the China Eastern Railway between Harbin and Changchun was jointly managed by Russia and China and came to be known as the North Manchuria Railway (北滿鐵路). The company created to manage the southern section, the South Manchuria Railway Company (南滿洲鐵道株式會社), soon developed into a mega-conglomerate, akin to the chartered corporations of early modern European empires, overseeing hotels, mines, mills, power plants, publishing, and much more, that expanded Japanese influence in Manchuria to the point that it became a virtual colony. By the 1930s, Mantetsu was the largest company in Japan and by itself formed a significant portion of the Japanese economy.

Mantetsu and the North Manchuria Railway

After the establishment of Manchukuo, Mantetsu was expanded to become the Manchukuo National Railway (滿洲國有鐵道). Since it was in a compromised position and difficult to administer, in 1934 the Soviets relinquished their claim on the section between Harbin and Changchun (now renamed Xinjing). Afterwards, the National Railway changed the gauge on the Harbin-Xinjing section (the North Manchuria Railway), from the wide 1,520mm Russian gauge to the standard 1,435mm gauge used elsewhere in Manchukuo.

This map was published in 1933 by the South Manchuria Railway Company. There is no known history of this edition on the market. The National Diet Library has a similar map from the following year (1934) that is almost certainly an updated version of this map (it is titled 'Harbin - 1934 Reprint' 哈爾濱 昭和9年再版). It is likely that Mantetsu regularly updated this map with new information.

Good. Overall toning and light dampstaining. Some wear along fold lines and at fold intersections. Slight loss at intersections, margin, and near the key.