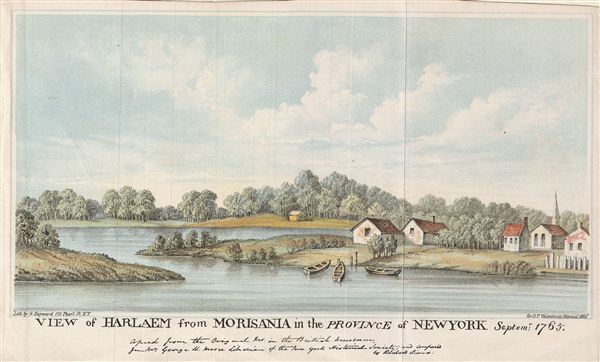 This is a beautiful view of an impressively bucolic Harlem, New York City, in 1765, as seen from Morisania (Morrisania), in the Bronx. Originally the estate of the Morris family in the Westchester County, Morissania Village (formed in 1840 after the railroad was allowed to run through it) became part of New York City in 1874 and is today part of Bronx. The ferry, established in 1667, is visible in the foreground. The church, visible on the right side of this view, was rebuilt after being destroyed during the American Revolutionary War and finally demolished in 1825. This view was copied from the original manuscript in the British Museum and engraved by George Hayward of 171 Pearl Street, New York, and issued in the 1863 edition of D. T. Valentine's Manual.

Valentine, D. T., Valentine's Manual of the Corporation of the City of New York, (New York) 1863.

Very good. Some wear and soiling on original folds. Blank on verso.
Looking for a high-resolution scan of this?