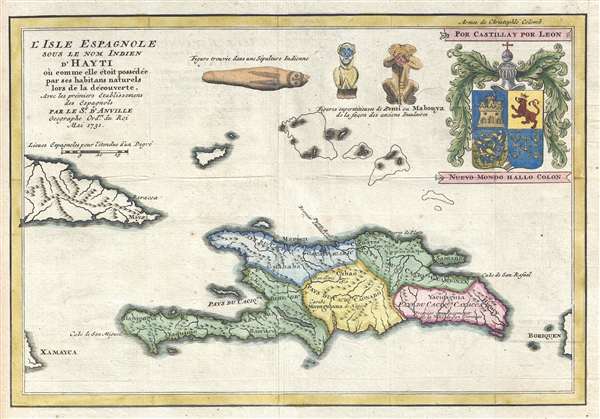 This is a beautiful hand colored 1731 Jean-Baptiste Bourguinon d'Anville map of Haiti. This map depicts the island of Hispaniola as it may have been before Christopher Columbus made is trans-Atlantic voyage. Hispaniola is divided into five different 'states,' which d'Anville explains is how the island was owned by its indigenous inhabitants before the arrival of the Spanish. D'Anville, however, did deem it appropriate to include the sites of the first Spanish settlements, including the first site of San Domingo and Puerto Real. D'Anville also included three sketches of indigenous art, including Zemis. A Zemi was a religious object of the Taíno people who lived in the Caribbean before the arrival of the Europeans. Sadly they have since died out or migrated off the island. In the upper right corner is a depiction of the coat of arms of Christopher Columbus, the first recorded European to discover the New World.

D'Anville was truly the first modern cartographer. Unlike many of his contemporaries and predecessors, d'Anville based his maps on intense study and research. His maps were also the most accurate and comprehensive of the period. He also left unknown areas blank and noted doubtful information as such on his maps. This map was drawn by d'Anville and engraved by Leparmantier. It was published by Pierre-Francois-Xavier de Charlevoix in his volume Histoire de l'Isle Espagnole ou de S. Domingue, which was published in Paris in 1731 by Pralard.