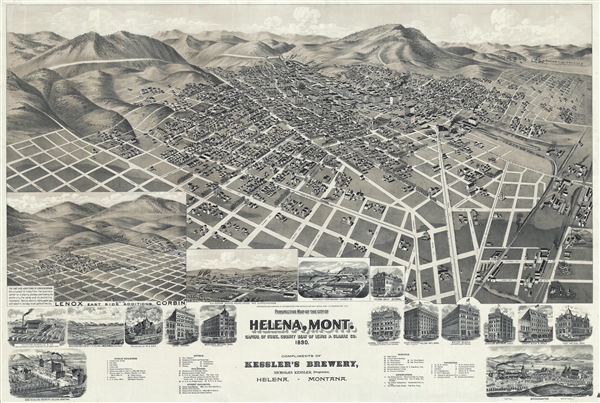 A dramatic bird's-eye view of Helena, Montana, issued by the Henry Wellge and the American Publishing Company in 1890. This impressive view is a fine example of Wellge's work, which is known for monumental size and emphasis of the horizontal dimension. The view is oriented to the west and centered on Helena Avenue. Much of the city's urban development appears in the distance and is focused on Main Street. The train station appears at right. There are 15 views of important buildings and a key at the bottom of the map that identify numerically some 52 important locations. A large inset view in the lower left focuses on Lenox, Corbin, and other East Side Additions. This map appears to have been issued in two editions simultaneously. One edition with the note 'compliments of Kessler's Brewer', and another (see LC example) without. The Kessler Brewing Company (1865 – 1958) was located on Helena's far west side, just west of todays' Spring Meadow Lake.