1846 Lowenberg Whimsical Map of both hemispheres 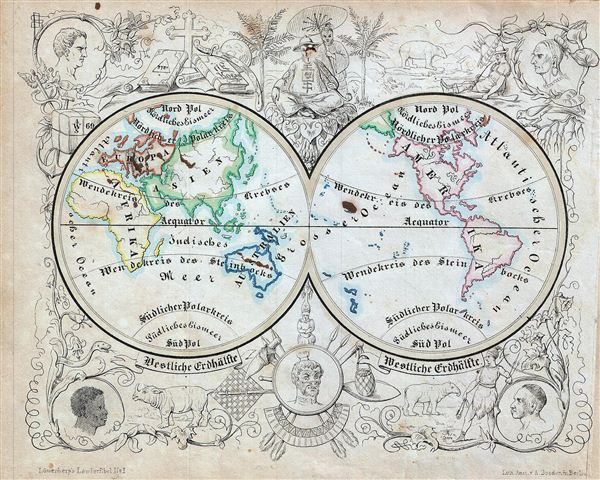 1846 Lowenberg Whimsical Map of both hemispheres

A delightfully whimsical 1846 map of the two hemispheres, from a German kinderatlas or children's atlas. The map details both the western and eastern hemispheres dividing the continents of Europe, Africa, Asia, Australia in the eastern hemisphere and America (north and south) on the western hemisphere with color coding. The whole is surrounded by a wide border featuring various charming vignettes meant to illustrate the indigenous peoples and cultures from different parts of the world. The map is accompanied by its adjacent page, which includes a poetic history of The Earth in German gothic type. The wonderful and rare map was drawn by Anst. V A. Boeden of Berlin for inclusion as plate no. I in the 1846 issue of Julius Loewenberg's Geographische Landerfibel.

Very good. Even overall toning. Blank on verso. Few small stains over Europe, Asia and Australia in the Eastern Hemisphere and over the Pacific Ocean in the Western Hemisphere.
Looking for a high-resolution scan of this?