1885 Monteith Chromolithograph Map of the World in Hemispheres 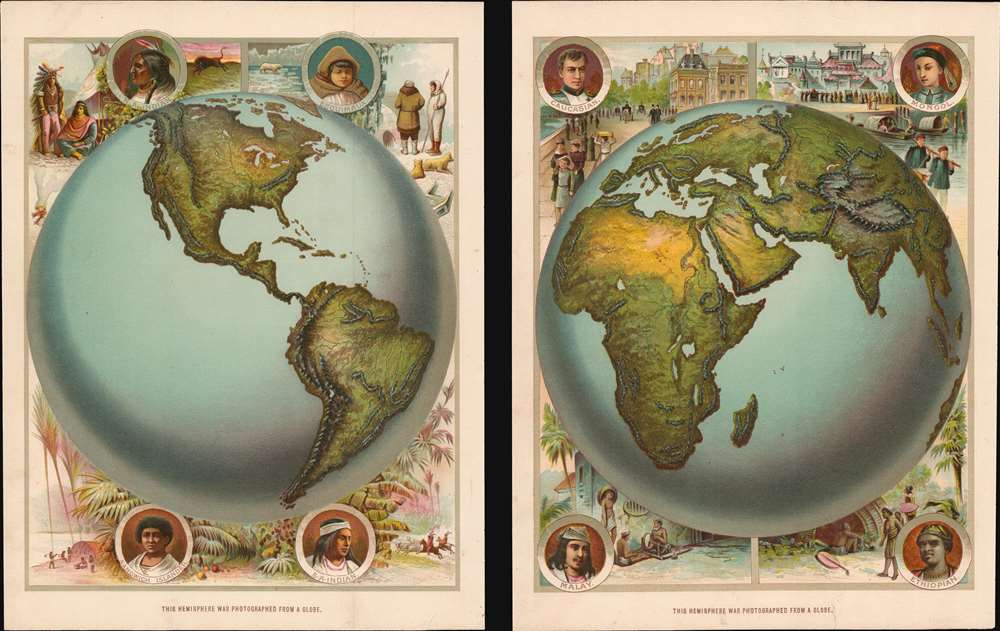 1885 Monteith Chromolithograph Map of the World in Hemispheres

Beautiful chromolithograph map of the world in hemispheres.
$300.00

This is a c. 1885 James Monteith map of the world in hemispheres. Printed on two sheets, captions under both hemispheres state that they were 'photographed from a globe.' Each hemisphere appears on its own sheet and, and major mountain ranges, lakes, and rivers are visible. Ethnographic pictorial borders, complete with stereotypical views, adorn both sheets. Portraits of a North American Indian, and Esquimaux, a Sandwich Islander, and a South American Indian surround the Western Hemisphere, and purportedly depict these peoples in characteristic scenes. The North American Indian, sitting in front of their tepee, is accompanied by a sketch of an American bison. At the same time, a polar bear on sea ice overlooks the Esquimaux standing in front of their igloo. The portraits of the Sandwich Islander and the South American Indian focus on the tropical vegetation of their native lands. Portraits of a Caucasian, a Mongol, a Malay, and an Ethiopian surround the Eastern Hemisphere. A European thoroughfare accompanies the Caucasian, while the same sort of view of an Asian city acts as the backdrop for the Mongol. Landscapes, much like those on the Western Hemisphere sheet, are presented with the Malay and the Ethiopian and depict these people in purportedly natural settings.

James Monteith (1831 - 18xx) was an author known for his geography textbooks. Some titles attributed to him include First Lessons in Geography, Comprehensive Geography, and Barnes's Complete Geography. We have been unable to uncover little else about him.

Very good. Image illustrates two separate sheets. Both exhibit even overall toning and have text on verso.
Looking for a high-resolution scan of this?