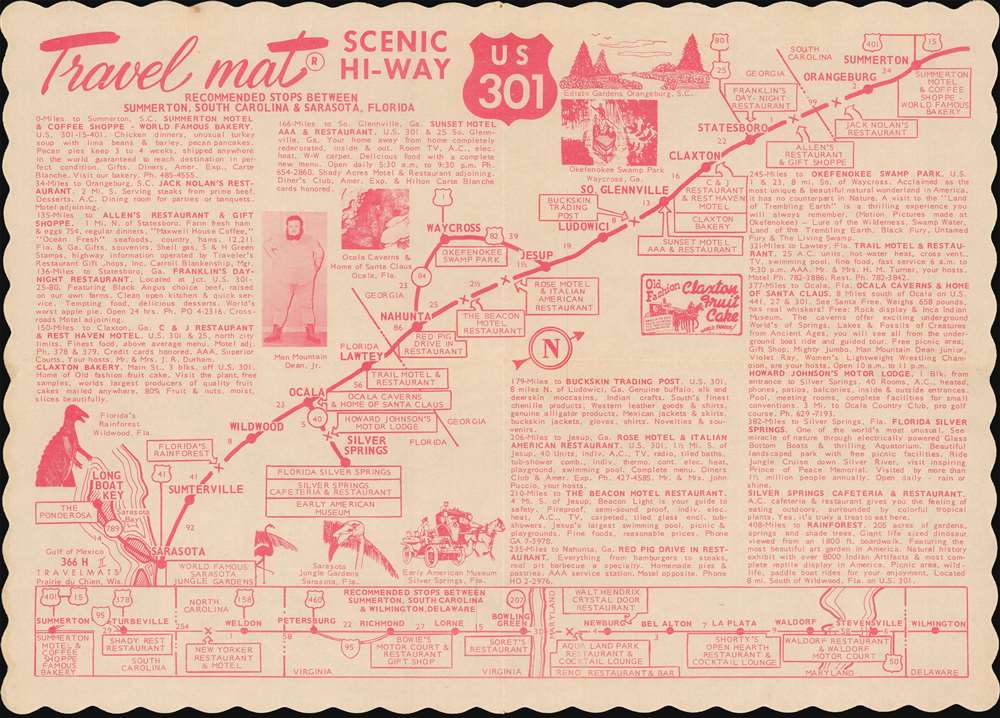 Promotes high-quality restaurants, motels, and tourist attractions along Highway 301 in Georgia and Florida.

This is a c. 1965 Travelmats Corporation of America pictorial 'Travelmat' illustrating Highway 301 from South Carolina to Florida. The map's coverage along Highway 301 reaches from Summerton, South Carolina to Sarasota, Florida and labels important waypoints throughout. It identifies towns, restaurants, parks, hotels, and motels, offering the traveler useful suggestions regarding stopping points. Some locations features short descriptions and summaries of services available, as well as each location's distance from Summerton. Pictorial vignettes highlight the Edisto Gardens in Orangeburg, South Carolina, Okefenokee Swamp Park in Waycross, Georgia, and the Sarasota Jungle Gardens in Sarasota, Florida. A strip inset map situated along the bottom depicts a suggested route from Wilmington, Delaware south to Summerton and provides distances, as well as suggestions for restaurants and motels.

The Travelmats Corporation of America (1948 - c. 1972) was an American advertising and publishing company based in Prairie du Chien, Wisconsin founded by J. Alvin Dru'yor. Travelmats manufactured place mats of well-traveled highways distributed them to restaurants, motels, hotels, and other places frequented by tourists across the United States. The company began publishing its 'Adventures in Travel' guidebook, or 'map-book' in 1948. In 1963, Dru'yor stated that businesses nominated for their guidebook should have a parking lot, good food, be modern and clean, and give the traveler outstanding value and service. By 1965, the company, which had been started as an offshoot of a weekly newspaper in Prairie du Chien, had grown to nearly 4,000 subscribers and was the second largest company that provided tourist information and recommendations in the United States. Travelmat's ultimate fate is unclear, but it is known that Dru'yor retired in 1972.

While this Travelmat is undated, we can narrow down the range of publication to between 1963 and 1967, when the Rainforest and Art Garden was open in Wildwood, Florida, which is marked by its iconic dinosaur statue situated along the left border. This map was published by Travelmats Corporation of America c. 1965. This is the only known surviving example.

J. Alvin Dru'yor (August 18, 1903 - April 29, 1990) was an American newspaperman and publisher. Born in Wall Lake, Iowa, Dru'yor graduated from high school in Cherokee, Iowa, after which he attended advertising school in Indiana. He worked for the Cherokee TImes and the Elkader Register before moving to Prairie du Chien, Wisconsin in 1928 where they purchased the Crawford County Press. He founded the Travelmats Corporation of America in Prairie du Chien, Wisconsin, in 1948 as a secondary business to the Crawfordd Country Press, which he sold in 1954 to work full-time at Travelmats to continue to foster its success. He worked at Travelmats until 1972. Dru'yor was a member of the Kiwanis Club, the Masonic Lodge, an the Great River Road Commission, a board member fo the Prarie du Chien Foundation and a founding member of the Chamber of Commerce. He married his wife Inez Bock in Tampa, Florida on February 6, 1928, with whom he had one daughter. Learn More...