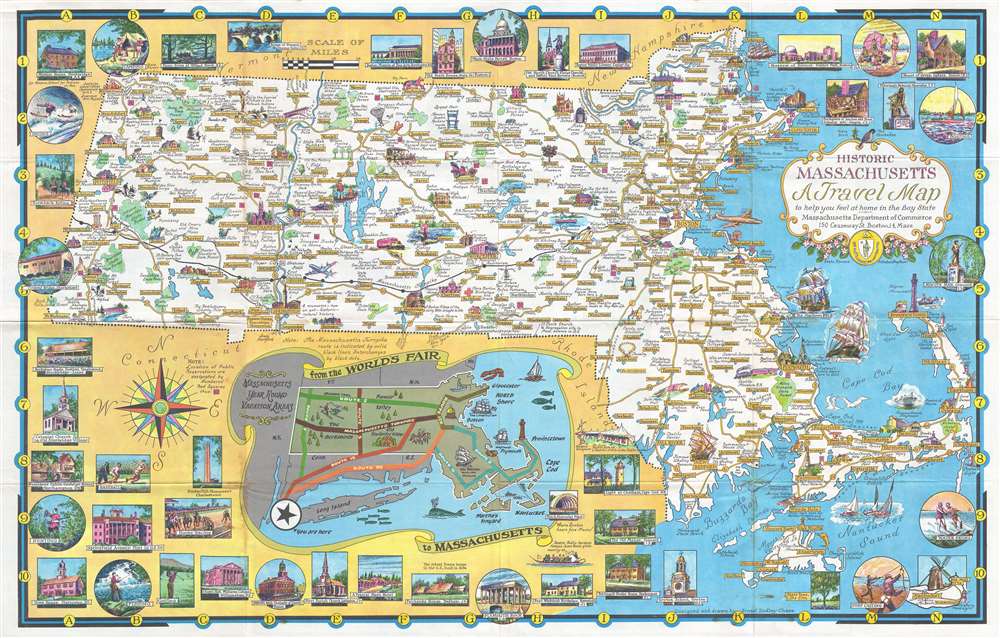 A special edition map created for the Massachusetts pavilion at the 1964 New York World's Fair.
$200.00

One of Ernest Dudley Chase's less common pictorial map, this map of Massachusetts created for the Massachusetts Pavilion at the 1964 New York World's Fair. The map depicts the state from New York to the Atlantic Ocean and from Vermont and New Hampshire to Connecticut. Charmingly illustrated with eye-catching color, the map highlights the many sightseeing opportunities available to people visiting the Bay State. Historic buildings throughout the state are illustrated in profile and in the vignettes that frame the map, while historic ships, such as the Mayflower and Old Ironsides, ply the waters off the Massachusetts coast. Myriad cities and towns are labeled, including Boston and Plymouth. An inset map along the bottom border illustrates the many different routes one could take from the World's Fair to visit Massachusetts, highlighting Boston, Plymouth, and the New Bedford Whaling Museum, which had lent a 175-foot section of the famous 1,295-foot-long Whaling Panorama for the restaurant of the New England Pavilion. As stated above, numerous vignettes highlight different aspects of life in Massachusetts. Outdoor activities, such as fishing, golfing, horseback riding, and boating, are depicted, as are historic sites from around the state, including Springfield Armory, Faneuil Hall in Boston, and the Bunker Hill Monument in Charlestown.

Massachusetts and the 1964 World's Fair

At the 1964 World's Fair, the six New England states – Maine, New Hampshire, Vermont, Massachusetts, Rhode Island, and Connecticut - took part in the fair collaborated on a pavilion. Each state had their own exhibition space, known as 'the Court of States'. The pavilion also featured a 'village green' where groups from different New England communities held dances, musical performances, and fashion shows of New England-made apparel. New England-made products were sold to fairgoers at the Country Store, and a restaurant served typical regional dishes.

This map was created by Ernest Dudley Chase for distribution at the Massachusetts pavilion during the 1964 New York World's Fair. There are at least two known editions of this map. The first edition includes an inset map of the greater Boston area. This special edition for the New York World's Fair is scarce, as we have been able to locate only one other known example in the collection of the Norman B. Leventhal Map Center at the Boston Public Library.

Ernest Dudley Chase (1878-1966) was an American illustrator of greeting cards and pictorial maps active in the first half of the 20th century. From his studio in Winchester Massachusetts, Chase became famous for his elaborately illustrated pictorial maps. He was born in Lowell Massachusetts and attended the Lowell Textile School and the Vesper George Art School. He took work with Butterfield Printing Company in 1900. In 1906 he moved to the W. T. Sheehan Printing Firm. He began producing postcards and greeting cards on his own account in 1908. This initial imprint was Des Arts Publishers, but later he changed it to Ernest Dudley Chase Publishers. Chase is best known today for his distinctive pictorial maps, most of which he published privately, characterized by densely packed vignette images of important locations. The biographical pamphlet A Meticulous Maker of Maps describes Chase's attention to detail wherein, pursuing a 'passion for perfection' by stippling his images 'dot-by-dot, with tiny pens' under a magnifying glass. His impressive corpus includes nearly 50 maps focusing various parts of the United States and Europe. Most are thematic, focusing on topics such as wonders of the world, stamps, aviation, and war. Others, such as his map of The Untied States as viewed by California and Loveland are satirical in nature. All are highly coveted by collectors today. Learn More...