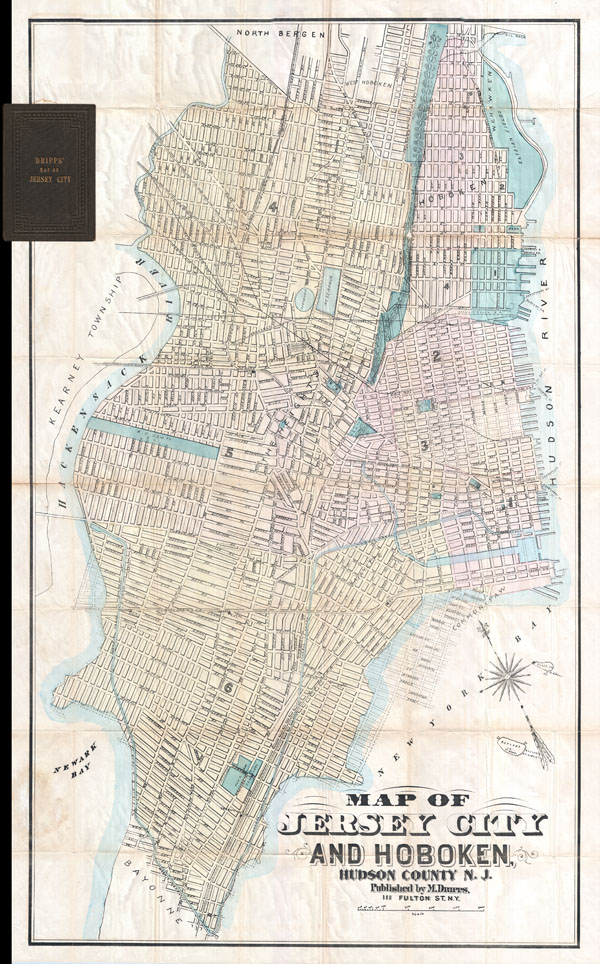 A map of exceeding rarity. This is the only known example of Matthew Dripps' pocket map of Jersey City and Hoboken. While this map is undated, the combination of the map's attribution, printing style, and the inclusion of certain geographic features such as the Statue of Liberty, firmly date it to 1885 - 1887 period. Covers Jersey City and Hoboken from North Bergen and the Elysian Fields of Weehawken south to Bayonne. Bounded on the west by the Hackensack River and on the east by New York Bay and the Hudson River. Identifies various streets, canals, parks, reservoirs, train lines, tunnels, ferry lines, and important public buildings. We have been unable to locate a single example of this map in any major collection or cartobibliography. Published by Matthew Dripps from his 111 Fulton Street office in New York City.

Matthew Dripps (1812 – April 9, 1896) was an Irish-born American mapmaker active in Philadelphia and New York during the second half of the 19th century. Dripps was born in Gracefield, Ireland. In Ireland, probably Belfast, he worked as a grocer. Dripps immigrated to American from Belfast on the Patrick Henry in 1849, arriving in Philadelphia, where he connected with the Reformed Presbyterian Church and worked briefly as a tax collector. His earliest recorded maps, depicting Philadelphia, appeared during this period. Dripps relocated to Brooklyn, New York in 1850, setting up shop as a map publisher. His two largest maps were published in the following years, 1850 and 1851, and combine to form an enormous map of Manhattan. These gained him the attention of the City Council, who used his maps for census and government work. Afterwards, he issued other large format New York City and Brooklyn maps as well as smaller maps for the New York City Clerk's office. He was married to Ameila Millar Dripps with whom he had six children, among them Amelia Dripps and the clergyman Joseph Frederick. Dripps is interred at Greewood Cemetery, Brooklyn.

Very good condition. Verso repair and reinforcement on original fold lines. Comes with original linen binder, from which it has been removed for framing purposes. Minor damage and discoloration where originally attached to binder in upper left quadrant.
Looking for a high-resolution scan of this?