1832 Delamarche Map of Holland and Belgium 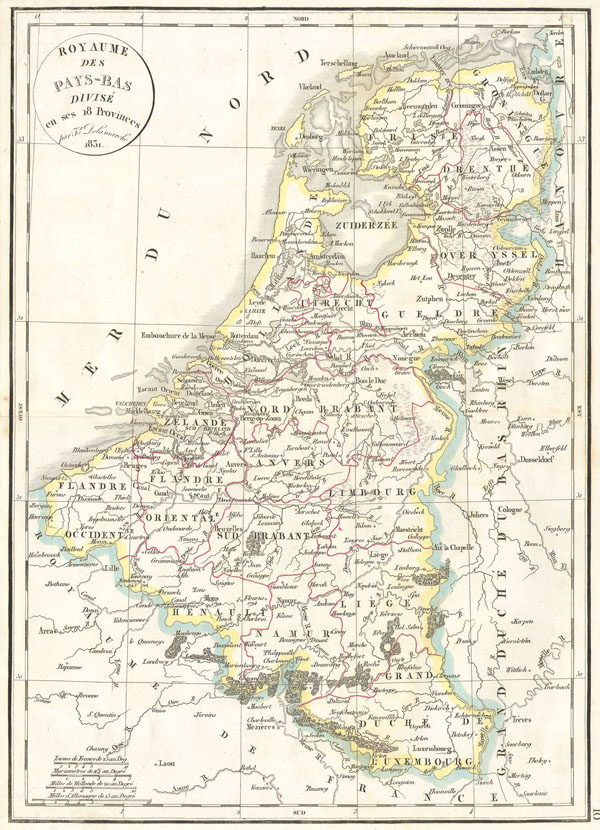 1832 Delamarche Map of Holland and Belgium

This hand colored map is a copper plate engraving, dating to 1832 by the well known French mapmaker Delamarche. It is a representation of Holland and Belgium.

Charles Francois Delamarche (1740-1817) founded the important and prolific Paris based Maison Delamarche map publishing firm in the late 18th century. A lawyer by trade Delamarche entered the map business with the acquisition from Jean-Baptiste Fortin of Robert de Vaugondy's map plates and copyrights. Delamarche appears to have been of dubious moral character. In 1795 the widow of Didier Robert de Vaugondy Marie Louise Rosalie Dangy, petitioned a public committee for 1500 livres, which should have been awarded to her deceased husband. However, Delamarche, proclaiming himself Vaugondy's heir, filed a simultaneous petition and walked away with the funds most of which he was instructed to distribute to Vaugondy's widow and children. Just a few months later, however, Delamarche proclaimed Marie Dangy deceased and it is highly unlikely that any these funds found their way to Vaugondy's impoverished daughters. Nonetheless, where Vaugondy could not make ends meet as a geographer, Delamarche prospered as a map publisher, acquiring most of the work of earlier generation cartographers Lattre, Bonne, Desnos, and Janvier, thus expanding significantly upon the Vaugondy stock. Charles Delamarche eventually passed control of the firm to his son Felix Delamarche (18th C. - 1st half 19th C.) and geographer Charles Dien (1809-1870). It was later passed on to Alexandre Delamarche, who revised and reissued several Delamarche publications in the mid-19th century. The firm continued to publish maps and globes until the middle part of the 19th century.