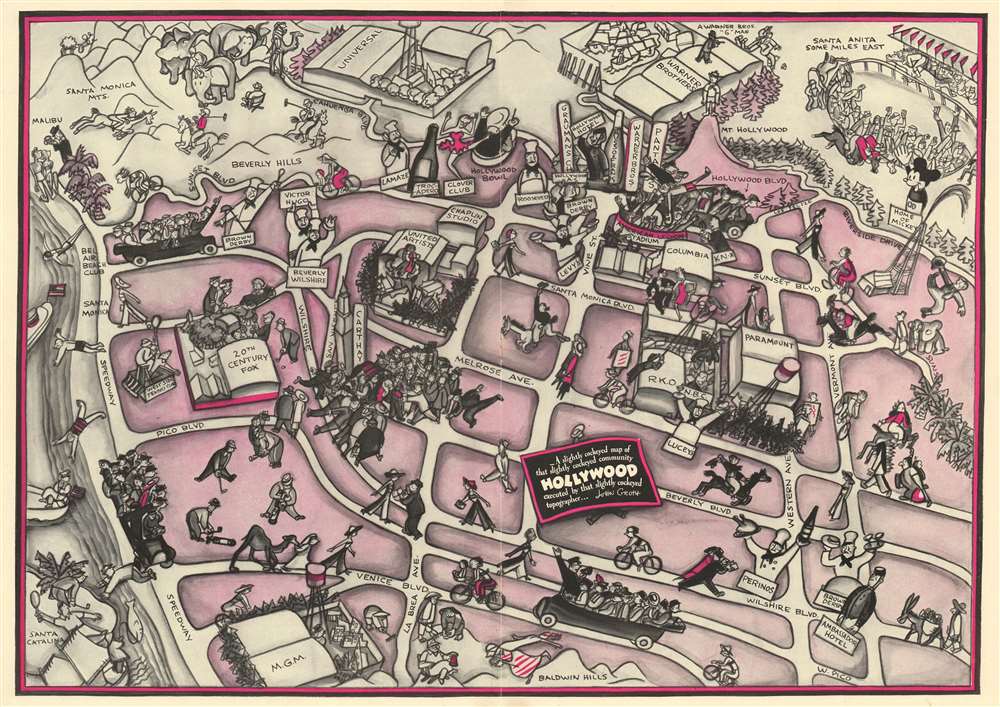 This is a 1937 John. Groth pictorial map of Hollywood, California. Hollywood's glitz and glamour abound, with movie studios, such as Universal, 20th Century Fox, M.G.M., R.K.O., Warner Brothers, United Artists, Columbia, and Paramount, all vying for the viewer's attention. Radio stations, including N.B.C. and K.N.X., attempt to distract the viewer from the movie studios. Buses full of people travel Hollywood's roads, which are all labeled. Large crowds of people congregate around Cathay, at the American Legion Stadium, and the Santa Anita Racetrack. High society clubs and eateries, such as the Clover Club, Victor Hugo, the Beverly Wilshire, and Perino's. Groth contrasts Hollywood's wealth with windows into its obvious poverty, personified by Chinese laborers working near M.G.M. and migrants selling fruits and vegetables walking the streets next to the city's fashionable movie stars.

This map was created by John Groth and published in Stage magazine in 1937. Three examples are cataloged in OCLC and are part of the collections at the Library of Congress, Yale University, and the University of California Berkeley. An additional example is part of the David Rumsey Historical Map Collection.

John Groth (February 26, 1908 - June 27, 1988) was an American artist and journalist. Born in Chicago, his first newspaper job was working at the Chicago Sun as cartoonist Frank Willard's assistant. His job entailed drawing squares on a character's pants in the Moon Mullins comic strip. Eventually he became an artist-war correspondent for the Sun and reported on the fighting during World War II and Korea, as well as the conflicts in French Indochina, the Belgian Congo, Santo Domingo, and Vietnam. He rode on the first Allied jeep into Paris in 1944, which inspired Ernest Hemingway to quip, 'If John had made drawings from any closer up-front, he would have had to have sat in the Krauts' laps.' He also became art director for Esquire Magazine while still in his twenties. Groth published two books of his own work and illustrated beautiful volumes of other novels, including John Steinbeck's The Grapes of Wrath and Hemingway's Men Without Women. Groth was also known for his sports illustrations. Over the course of his career, Groth taught at the Pratt Institute, the Art Students League of New York, and the Parsons School of Design. Learn More...