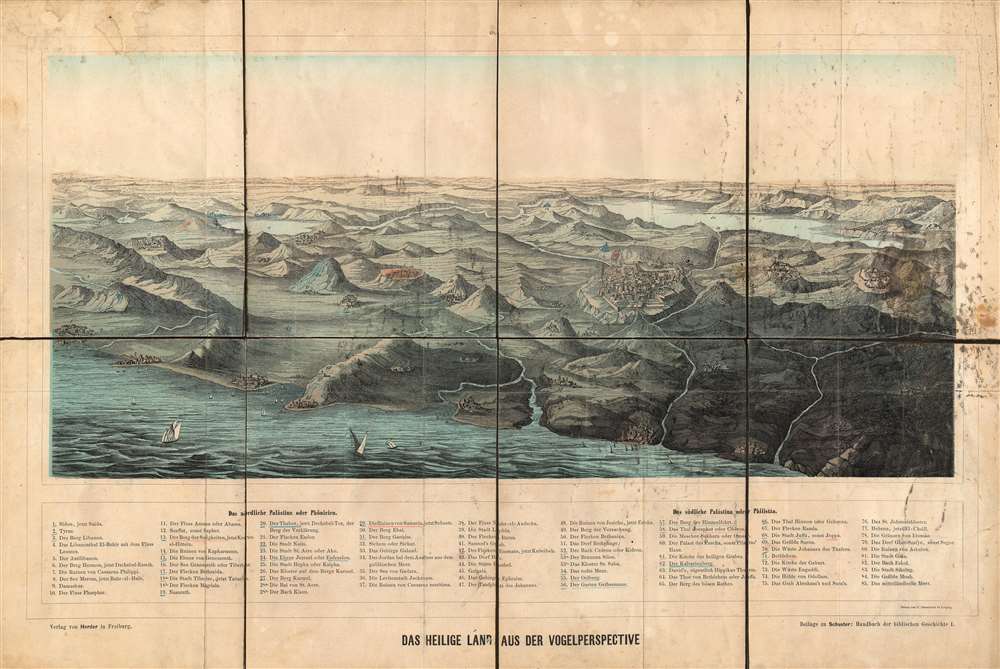 This is an extremely rare c. 1890 chromolithograph view of the Holy Land drawn by C. Grumbach in Leipzig and published by Hermann Herder in Freiburg. The view depicts the region from Sidon, Lebanon to Hebron, a Palestinian city located in the West Bank, and from Mt. Moab to the Mediterranean Sea. Beautifully engraved and colored, eighty-five different locations are numerically identified and correspond to an index situated along the bottom of the view. Some of these locations include the Dome of the Rock in Jerusalem, Haifa, and Nazareth.

This view was drawn by C. Grumbach and published by Hermann Herder c. 1890. It is extremely rare, with no history on the private market and only two examples recorded in the OCLC, one at Universitätsbibliothek Erlangen-Nürnberg, Hauptbibliothek in Erlagen, Germany and the other at the National Library of Israel in Jerusalem.

Hermann Herder (November 14, 1864 – October 19, 1937) was a German publisher. Herder attended the University of Freiburg for a few semesters but did not finish. In 1885, Herder moved to Mainz where he learned publishing. He then returned to Freiburg and began working for his father's publishing firm, the Herder Publishing House. He took over the business in 1888 and became sole owner in 1895. He went on to run the firm for the next 49 years. In 1912 Herder had a larger publishing house built in order to bring the various different departments of the firm under one roof. Today, this building is used by the University of Freiburg. Learn More...

Average. Dissected and mounted on linen. Color vivid but paper exhibits soiling, particularly on the right side and margins. Old linen backing reinforced.