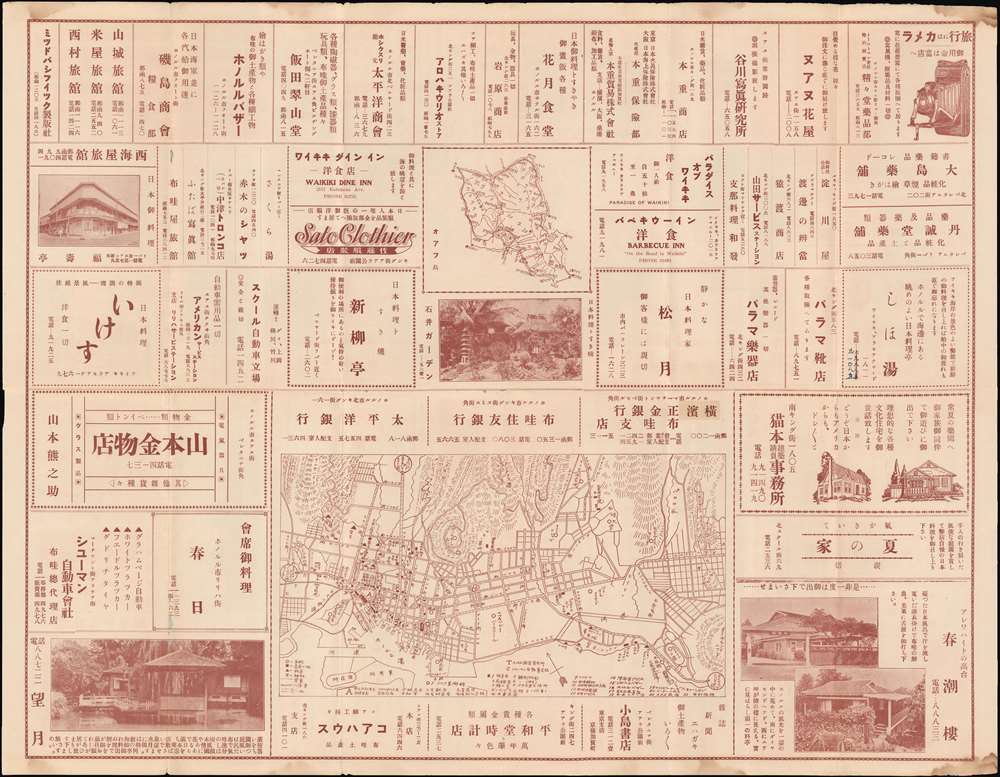 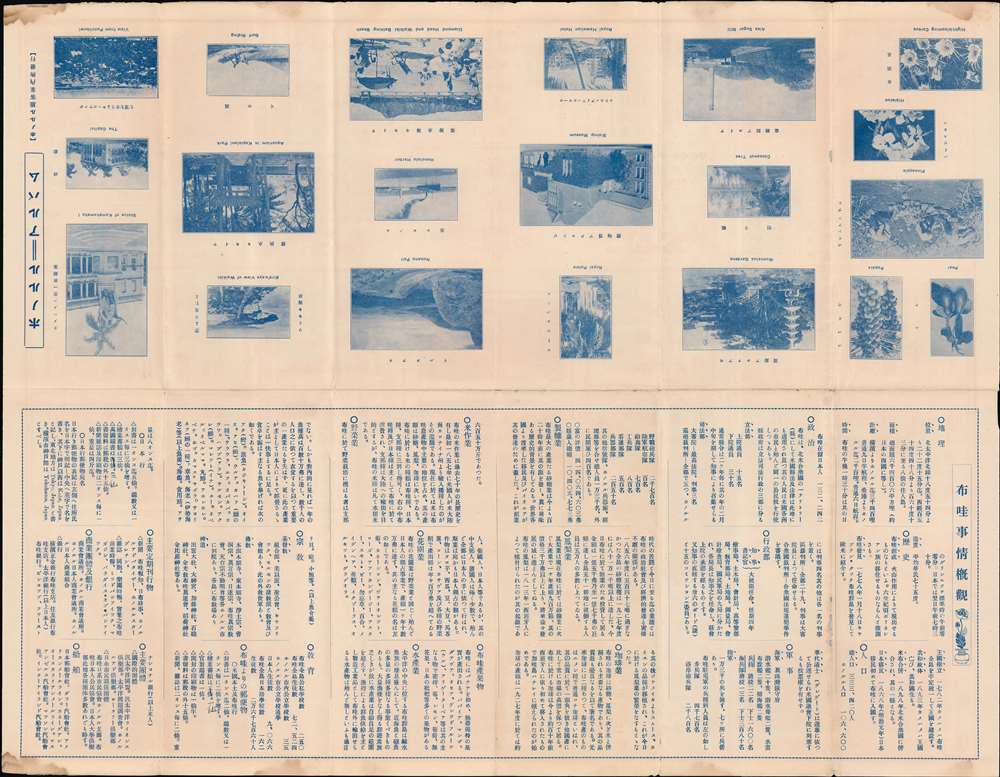 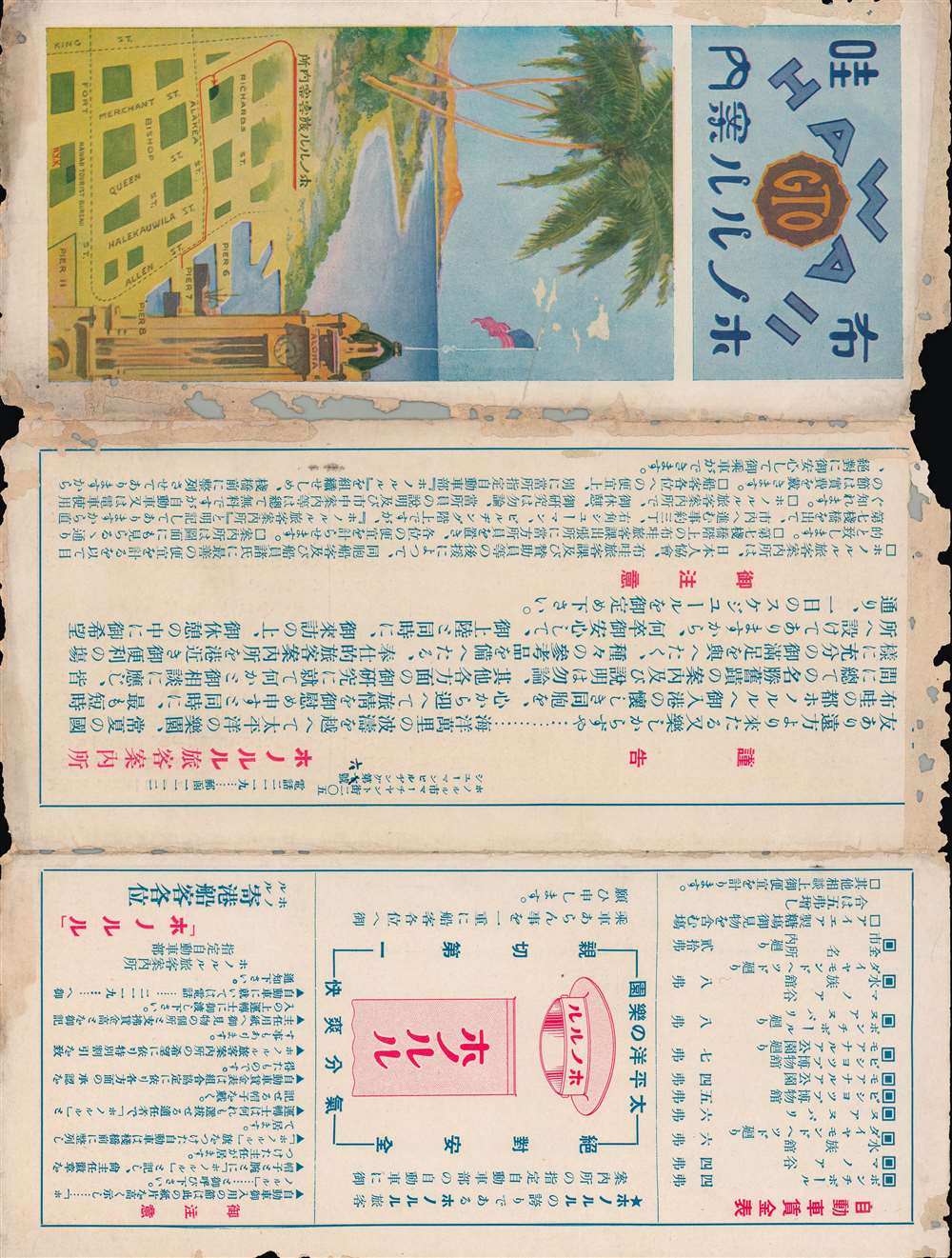 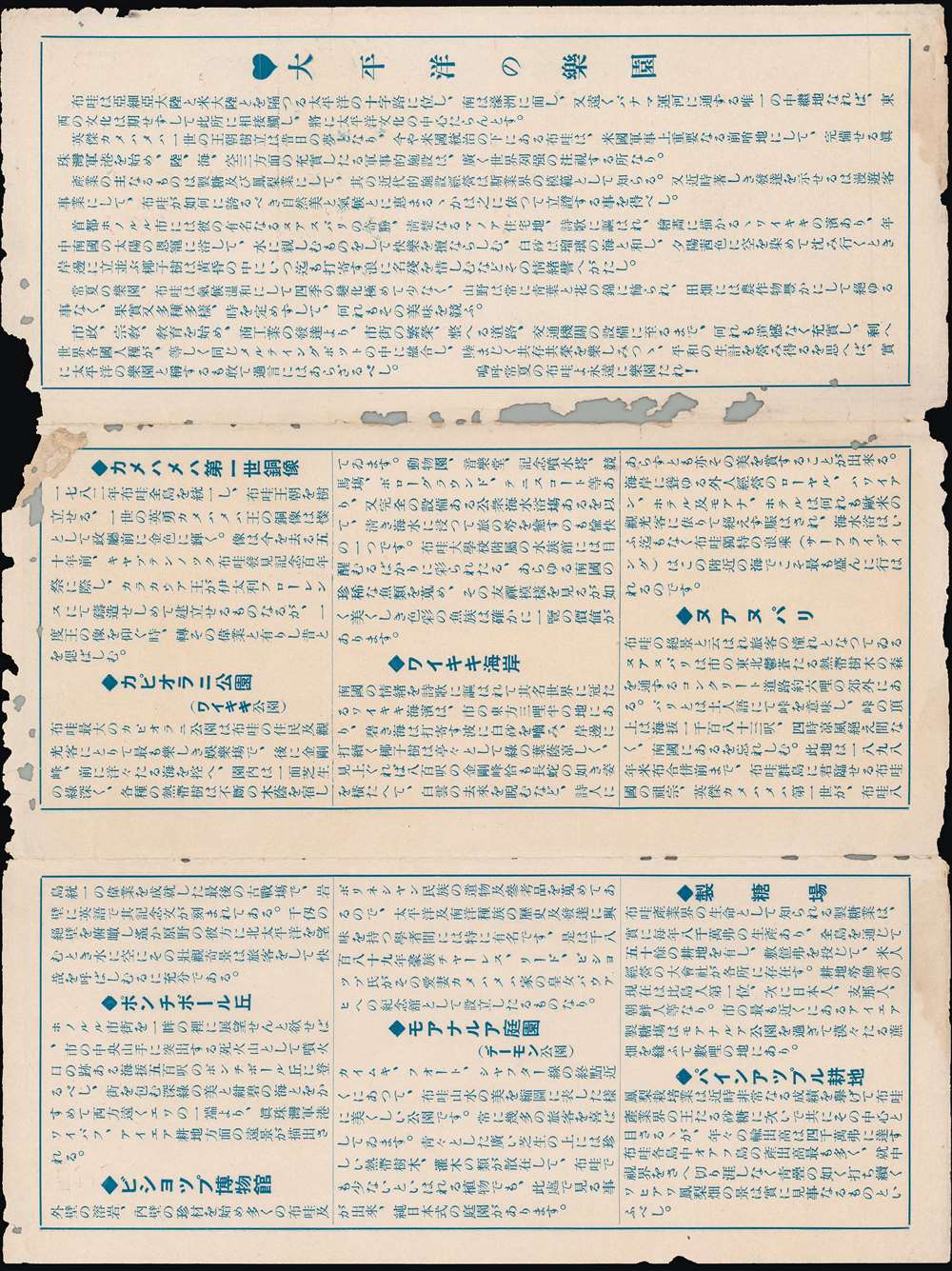 This is a rare c. 1930 map and guide of Honolulu for Japanese tourists made by the Aala Automotive Union (アアラ自動車組合). It is an extremely detailed guide that would have helped travelers integrate with relative ease in such a distant destination.

Much of the guide page with the map is taken up by advertisements for Japanese businesses in Honolulu, catering to any possible need of the traveler, including hotels, restaurants, clothing stores, banks, and hardware stores. At center-top is an inset map of Oahu (オアフ島). The verso includes a set of photos of famous tourist sites in and around Honolulu and an overview of Hawaii's geography, history, population, politics, administration, military affairs, various industries (sugar, coffee, pineapples, and so on), religion, and education. It ends with a list of services available to the Japanese-speaking community including mail, newspapers, magazines, banks, and social and communal organizations.

The outside of the pamphlet includes, at top-right, a guide to the price of a hired car to visit various tourist sites throughout the city, as well as several announcements on the uses of the guide, the reasons for compiling it, and the organizations that contributed to it. The inside of the pamphlet includes a general, if florid, description of Hawaii ('The Pacific Paradise'; 太平洋の楽園), information on Kamehameha I, founder of the Kingdom of Hawaii, Kapiolani Park in Waikiki, Waikiki Beach, Nu‘uanu Pali, Punchbowl Crater, the Bishop Museum, and Moanalua Gardens. The original owner has corrected the guide on some addresses and telephone numbers, including that of the map's distributor, the Honolulu Passenger Information Office (ホノルル旅客案内所).

Japanese exchange with Hawaii dates to the early 19th century when, in 1806, the survivors of the ill-fated Japanese cargo ship Inawaka-maru, were stranded on the archipelago. These survivors were treated well by the king, leading to an official Hawaiian delegation to Japan in 1866. The first Japanese immigrants to Hawaii, 142 men and 6 women known as the Gannenmono (元年者), arrived two years later in 1868 (Meiji 1). These first Japanese immigrants were brought to Hawaii as low-cost labor to work sugar plantations. Following mistreatments associated with the sugar plantations, the Emperor banned further immigration to Hawaii until 1885. In that year, a second wave of 153 Japanese immigrants arrived, also to indentured work on sugarcane and pineapple plantations. Further immigration followed, with about 900 total immigrants arriving in 1885 alone. Nearly 30,000 followed in the subsequent years. Many returned to Japan when their three-year plantation contracts expired, but some stayed, becoming known as the Issei, the first generation. Their children, born in Hawaii, were consequently known as the Nisei.

The Japanese immigrants to Hawaii were generally ill-treated as second-class citizens. They nonetheless maintained their Japanese language, religion, and traditions, often preferring to bring marriage partners from Japan rather than wed locals. Thus, a large and mostly homogenous Japanese community emerged, with their own businesses, neighborhoods, hospitals, and schools. Today, Japanese culture remains a vibrant part of Hawaii culture and Japanese Hawaiians make up the second largest ethnic group in Hawaii.

This map was published by the Port of Call Passenger Information Department of the Aala Automotive Union (アアラ自動車組合寄港船客案内部) and distributed by the Honolulu Passenger Information Office (ホノルル旅客案内所). The date is unclear but it most likely dates from before World War II, as travel for Japanese to Hawaii was virtually impossible during the U.S. occupation of Japan and remained extremely difficult until 1964, when the Japanese government relaxed foreign exchange rules in order to join the International Monetary Fund. This map is held by the Nichibunken (International Research Center for Japanese Studies) and the Huntington Library, Art Museum, and Botanical Gardens (which dates it to c. 1930). It is very scarce to the market.

Good. Map has some wear along fold lines and water spots along margins. Original folder has some edge loss.