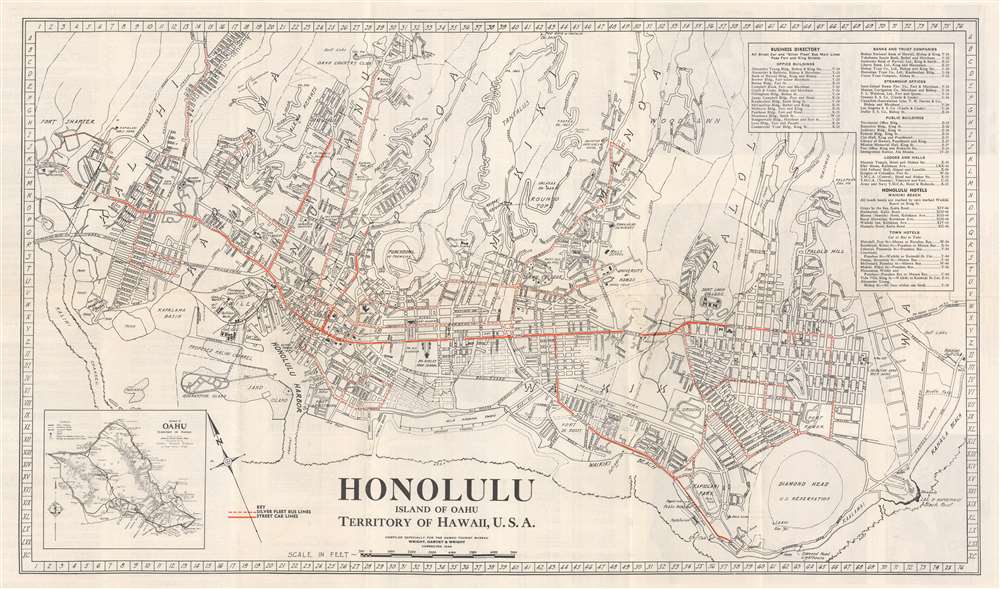 This is a 1934 Honolulu Rapid Transit Company city plan or map of Honolulu, Hawaii. Meant to help people get around the city, Honolulu's streetcar and 'silver fleet bus' routes are noted. Streets throughout the city are illustrated and labeled, along with schools, parks, hospitals, clubs, and beaches. The University of Hawaii appears above and to the right of the map's center. A business directory and a short hotel index occupies the upper right. An inset map depicting the entire island of Oahu appears in the lower left.

This map was created by Wright, Harvey, and Wright for the Hawaii Tourist Bureau and published by the Honolulu Rapid Transit Company in 1934. Three examples are cataloged in OCLC as part of the institutional collections at Columbia University, the University of Minnesota Minneapolis, and the University of Hawaii at Manoa.

George Frederick Wright (April 23, 1881 - July 2, 1938) was an American surveyor, businessman, and politician. Born in Honolulu, Wright attended the Old Fort Street School and Honolulu High School and graduated in 1898. Soon after graduating, Wright joined the government survey department and while there earned a reputation as being among the best surveyors in Hawaii. Wright left his position as a government surveyor in 1909 and started his own engineering firm. He founded the firm of Wright, Harvey, and Wright, in 1917, with his brother Stanley Wright and Fred R. Harvey. This firm completed the survey of the Parker ranch property on Hawaii and the survey of the island of Lanai, completed in 1925. Wright was also very active in Hawaiian politics. He was appointed to the Honolulu sewer and water commission and served from 1925 until 1931. Wright was elected to the board of supervisors for the city and county of Honolulu in 1926 and reelected in 1928. He was then elected Mayor of Honolulu in 1930 and served until his death in 1938. Wright died aboard the ocean liner Mariposa on his way back to Honolulu from Auckland, New Zealand, where he had gone in an effort to improve his failing health. Wright married May Martha Lycett on September 11, 1905, with whom he had one child. Learn More...