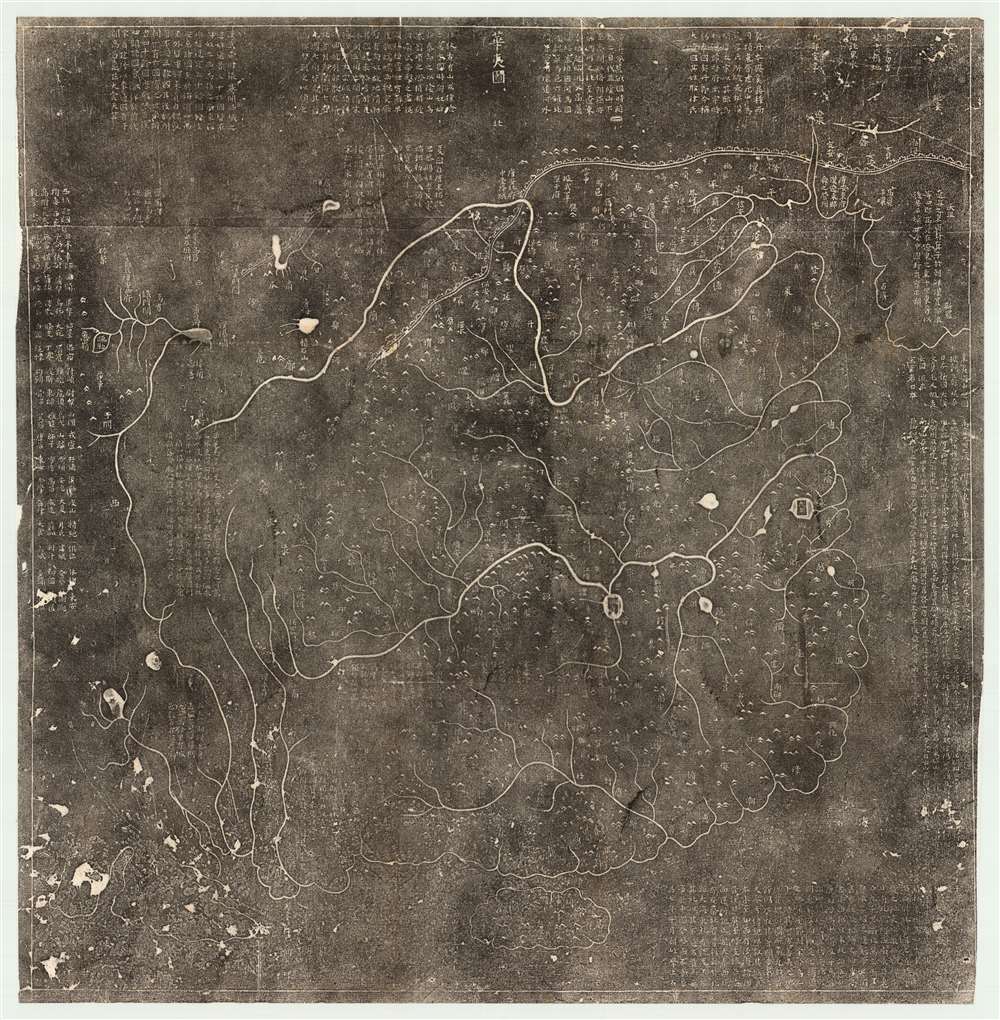 Map of Song China and its 'Barbarian' neighbors.

A 19th century Chinese rubbing of the Southern Song Dynasty Fuchang (阜昌) 17 or 1136 CE Hua Yi Tu 華夷圖 map of China. The map illustrates China during the Song Dynasty, covering form the Pamirs to Korea and from the Great Wall (northeast to Heilongjiang), to the south of Hainan Island. The map names numerous geographical features within China and note a few surrounding areas in Korea and India. The written notes in the margins describe additional 'barbarian' peoples.

The map correctly situates lakes, mountains, rivers, and Chinese prefectures, with more than 500 country names, 12 rivers, and 10 mountains identified. Nonetheless, the coastal regions are less accurate, suggesting that they were of lesser importance to the cartographer. The Liaodong, Shandong, and Leizhou peninsulas are inaccurate and the island of Hainan is vertically distorted.

The map itself was probably drawn sometime in the mid 11th to early 12th centuries. Cartographically it is derived from an earlier map issued by the 9th Century scholar Jia Tan for the Tang Emperor Dezong (唐德宗, 742 - 805 CE). That map, titled Nei Hua Yi Tu (Map of China and the Barbarian Countries within the Seas) is now lost, but apparently covered a much of Asia, such that this map is the China portion.

The stone stele for this map is located in the Stele Forest or Bei Lin Museum in Xi'an, China. The Bei Lin Stele is two sided, with one side featuring this map, the Hua Yi Tu 華夷圖, and a second side illustrating another important early map, the Yu Yi Tu 禹迹图. The two maps, one on each side of the stele, were carved within a year of each other, with the Hua Yi Tu dating 1136 and the Yu Yi Tu, 1137.

Rubbings from both stele have been made for hundreds of years, but few survive. We have identified rubbings of the Hua Yi Tu at the National Library in Beijing, the Bei Lin Museum in Xi'an, the Library of Congress in Washington D.C., the University of California Berkeley's East Asian Library, Columbia University, and Harvard University. While no other surviving rubbings are known, it is likely that several exist in other Chinese institutions. Today the Bei Lin Stele is protected under glass, a national treasure of China, but in the 19th century it was still possible to produce a rubbing. Most surviving rubbings in western collections date to around 1900, and the present example similarly dated based upon analogs in the paper, potential access to the stele, and unverifiable provenance referencing a late 19th English century trip to China.