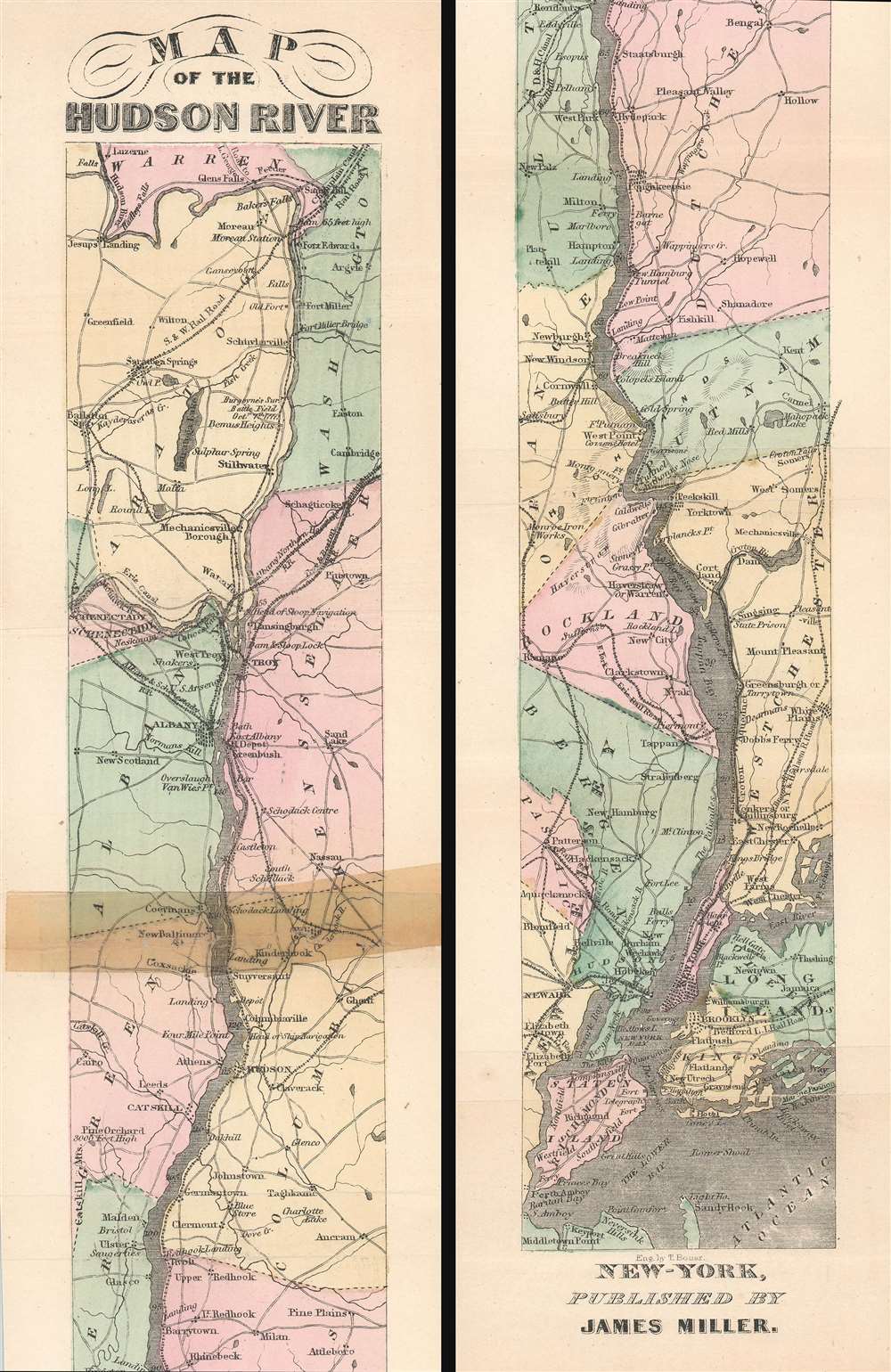 This is a scarce 1866 ribbon map of the Hudson River, New York by James Miller. The map depicts the course of the Hudson River from Lake Luzerne south as it empties into Upper New York Bay. It also illustrates the numerous towns, cities, and counties along its banks, including the New York state capital of Albany, Troy, Hudson, Kingston, Poughkeepsie, Peekskill, White Plains, Yonkers, and New York City. Manhattan, Brooklyn, Staten Island and Long Island are also illustrated.

This map was engraved by T. Bonar and published by James Miller in the 1865 edition of Miller's New York As It Is; or Stranger's Guide-Book to the Cities of New York, Brooklyn and Adjacent Places. An example of the separate map is cataloged in OCLC and is part of the institutional collection at Stanford University.

Thomas Bonar (1820 - May 19, 1891) was a New York City engraver and lithographer active in the second half of the 19th century. Bonar was born in Edinburgh, Scotland. He is described as 'the handsomest man to be seen in New York,' notable for his exceptional height, long white hair, and erect posture (Brooklyn Daily Eagle, May 20, 1891). He emigrated to New York City around 1847, which also corresponds to the earliest records of his work. From 1860 to 1863 worked for the New York Herald, producing engravings and 'war maps' illustrating Civil War events. He later worked for the Telegraph and the Tribune. In 1850, his work is associated with the firm of 'Bonar and Cummings', who produced engravings for the Methodist Book Room and Methodist Magazine. He retired from the lithography business around 1886 to devote himself to home life, travel, and the New York Press Club, of which he was an honorary member. He was also an active supporter of the Temperance Movement. Bonar maintained offices at 87 Nassau Street but lived in Brooklyn at 173 Taylor Street. Learn More...

Miller, J., Miller's New York As It Is; or Stranger's Guide-Book to the Cities of New York, Brooklyn and Adjacent Places, 1866.