1771 Bonne 4 Part Map of East Indies and the Philippines 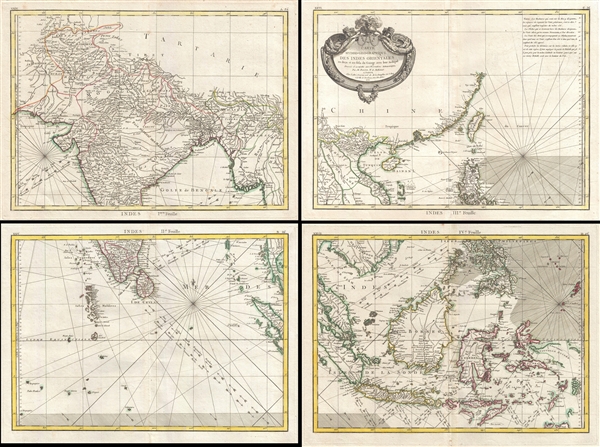 1771 Bonne 4 Part Map of East Indies and the Philippines

An uncommon example of Rigobert Bonne's 1771 map of the East Indies. Divided into four parts, the map covers from the Arabian Sea to the Philippines, and from Tibet and southern China to Java and Timor (Indonesia). It includes the Kingdom of Siam (Thailand), Laos, Tonkin (northern Vietnam), Cochin Chi (southern Vietnam), the island of Hainan, Formosa (Taiwan) and the Island of Luzon (northern Philippines). Notes Macao and Canton and shows, but does not label, Hong Kong Island. Similarly, Singapore Islands is shown but not labeled. The Strait of Singapore is labled, as are Jahor (Johr) and Malacca (Malaca). Tayoan (Taiwan) is noted on Formosa, but the term is incorrectly applied as, at the time, it refereed only to the Chinese western part of Formosa, as opposed to the tribal eastern portions of the island. Offers little inland detail with regard to China itself. Notes in the upper right hand corner comment on the Monsoons. Rhumb lines throughout. Arrows in the lower right show the direction of the prevailing trade winds according to season. A fine map of the region. Drawn by R. Bonne in 1771 for issue in Jean Lattre's 1778 edition of the Atlas Moderne.