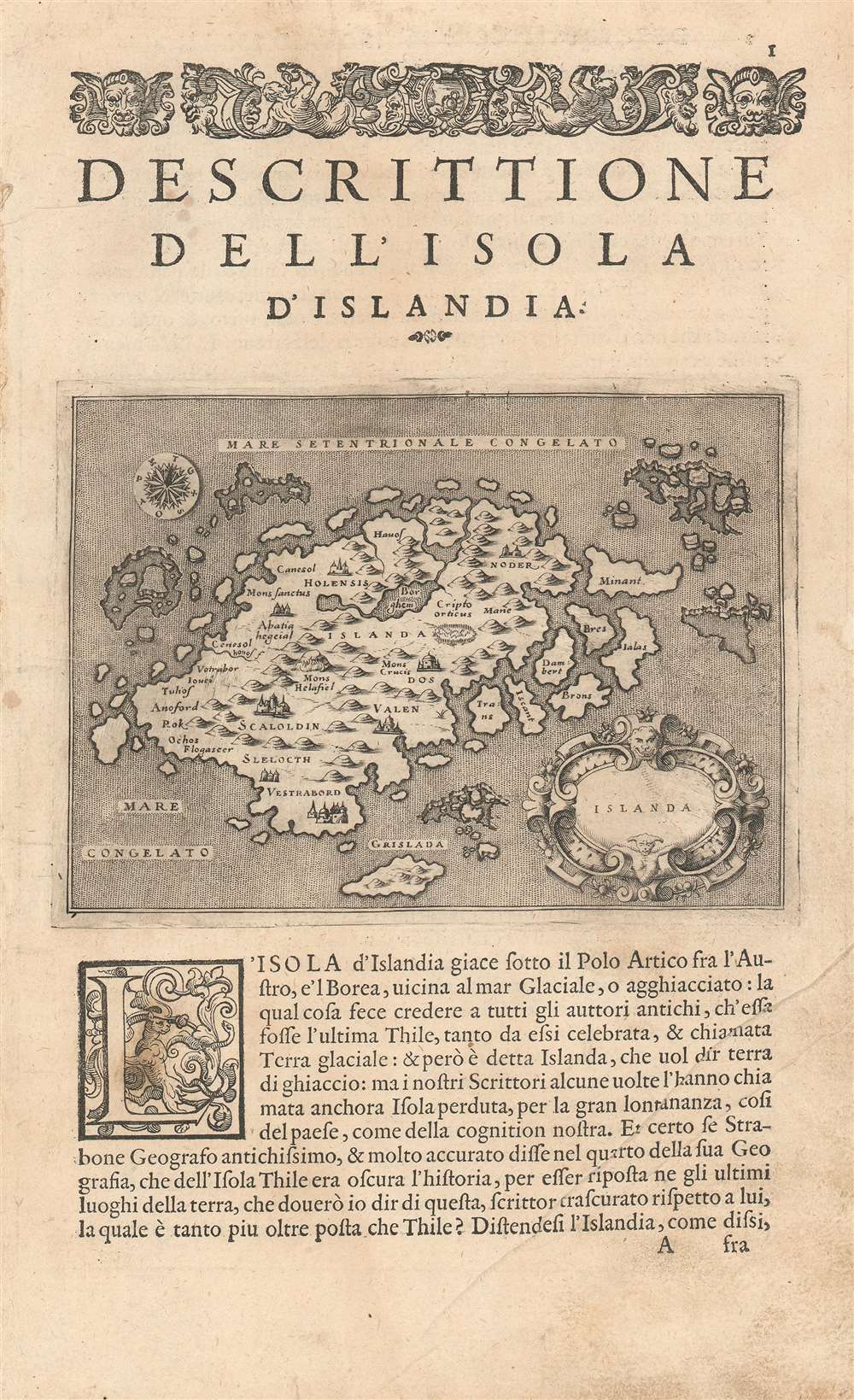 First Map of Iceland to Improve on Olaus Magnus

Tommaso Porcacchi's 1572 map of Iceland, in a beautiful early issue with a bold, sharp strike. It is the first separate map of Iceland to improve upon the cartography handed down from the venerable 1539 Olaus Magnus Carta Marina, whose Iceland data was reproduced by several mapmakers of the La Freri school without improvement. This map - elegantly engraved by Girolamo Porro for Porcacchi's isolario - starts with the Iceland of Magnus' Carta Marina but corrects the locations of many features. For example, the see of Hólar (Holensis) has been moved to its right place in the north, and Skálholt (Scalholdin) is correctly located in the south. Both of these locations were important in recent Icelandic history: Hólar had been the see of Jón Arason, the last Catholic bishop of Iceland. During the Reformation, it was to Skálholt that Arason and his two sons were taken and beheaded. Not all of Porcacchi's additions were well-advised; a few items have been taken from the wildly inventive Zeno map, including the seven islands appearing off the east coast.

OCLC shows nine examples of Islanda in various editions within institutional collections. Porcacchi's isolario was first published in 1572 and was followed by no fewer than five additional editions; OCLC shows a further 1576, 1590, 1603, 1605 and 1620. This example of Islanda corresponds typographically to that found in the 1576 edition.

Tomaso Porcacchi Castilione (1530 - 1585) was a Venetian geographer, humanist, historian, and author active in the mid 16th century. Porcacchi, as he is most commonly known, was born in the Val di Chiana and lived for a time in Florence and where he enjoyed the patronage of Cosimo de Medici. He was married to the Italian poetess Bianca d'Este. Porcacchi is best known as the author of the 1572 L'Isole piu Famose del Mondo. L'Isole was published in response to increase in general interest in geography following the many important explorations and discoveries of the last century. His most important cartographic contribution is the Mundo Novo, the first specific map of North America as a continent - published in L'Isole. Porcacchi died in Venice in 1585. Learn More...


Olaus Magnus (October 1490 - August 1, 1557), whose name is Latinized from Månsson, was a Swedish writer and Catholic canon and archdeacon. A mission to secure an archbishopric for his brother Johannes led him to travel to Rome in 1524, and thereafter he remained broad engaged in diplomacy until the victory of the reformation in Sweden exiled him permanently, first to Poland and then to Rome in 1537. Magnus' contributions to geography are his 1539 map Carta marina et Descriptio septemtrionalium terrarum and his 1555 Historia de Gentibus Septentrionalibus (a collection of folklore and history which for a century remained the European authority on Sweden, its people and its climate.) Carta Marina, a 9-sheet woodcut map surviving in but two known copies, was deeply influential, providing the dominant model for the mapping of the northern parts of Europe prior to Ortelius. The map has withstood scrutiny even to this day in some respects. Modern oceanographers have analyzed Magnus' work and found his descriptions of currents between Iceland and the Faroe islands to be accurate. Learn More...


NICOLÒ Zeno (1326-1402) and ANTONIO Zeno (d.1403) were two Venetian brothers whose supposed voyage to the north Atlantic and Nova Scotia - invented and publicized by a descendant in 1558 - provided the basis for a map whose fraudulent data was considered genuine for more than fifty years. The 1558 Zeno map's mythical islands and place names were propagated not only on maps produced by Mercator and Ortelius in the 16th century but even on the maps of Blaeu and other preeminent mapmakers well into the 17th century. Among the blatant lies to appear on the map is the utterly imaginary island of Frisland, shown with greater detail than Iceland, an island widely reputed to actually exist. Learn More...

Excellent. Printer's crease outside map area, else excellent with a sharp, bold strike.