1891 Rand McNally Map of the United States and the Illinois Central R.R. 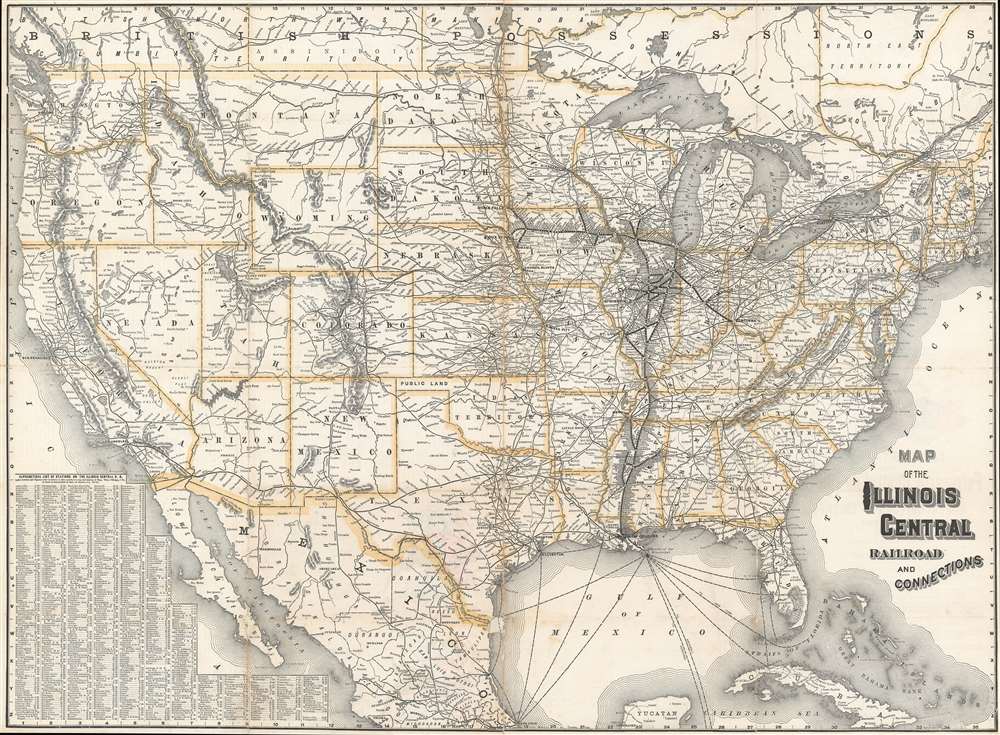 1891 Rand McNally Map of the United States and the Illinois Central R.R.

A map of the Illinois Central Railroad, one of the oldest Class I railroads in the United States.

This is a c. 1891 Rand McNally and Company map of the United States illustrating the Illinois Central Railroad and the rail network throughout the United States. The map depicts the continental United States from the Pacific Ocean to the Atlantic Ocean and from Canada to the Yucatan Peninsula and Cuba. The routes of the Illinois Central are highlighted by bold black lines bisected by white dots, which identify every stop along its lines from Sioux Falls, South Dakota to Cincinnati, Ohio and from Madison, Wisconsin, to New Orleans, Louisiana. Major cities are marked by larger dots, with the largest at Sioux City, Iowa; Chicago, Illinois; St. Louis, Missouri; Cincinnati, Ohio; and Memphis, Tennessee.

The rest of the rail network crossing the United States from coast to coast and winding its way almost everywhere in between branches out from the bolded Illinois Central, as if the entire organization started from its routes. Nearly all the lines are labeled. Major cities and towns throughout the country are identified and state capitals are marked by a special symbol, such as Springfield, Illinois, for example. The country's mountain ranges are illustrated and labeled, as are its major lakes. An alphabetical list of stations on the Illinois Central Railroad is situated in the lower left corner and provides the name of the station and its location on the map's grid.

This map was created and published by Rand McNally and Company for the Illinois Central Railroad c. 1891. We are aware of no other surviving examples.

Good. Backed on archival tissue for stability. Areas of infill at fold intersections. Area of discoloration in top left quadrant. Blank on verso.
Looking for a high-resolution scan of this?