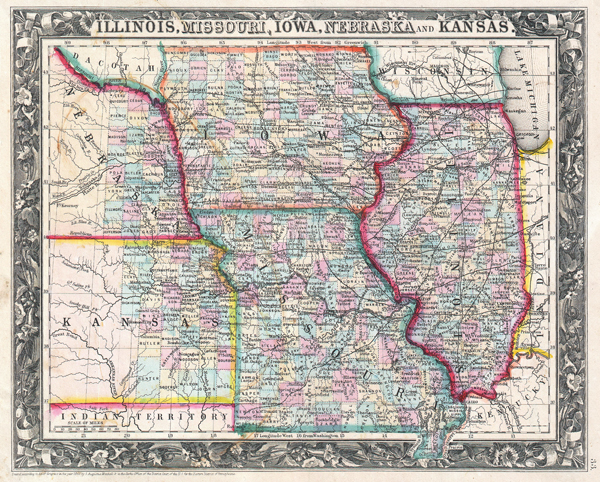 A beautiful example of the first edition of S. A. Mitchell Jr.'s 1860 map of Iowa, Nebraska, Illinois, Missouri Kansas and Nebrasa. Detailed to the county level with attention to towns, geographical features, proposed railroads, and cities. Western Nebraska and Kansas exhibit archaic county lines as the U.S. Land Office had not yet completed its survey and partitioning of this region. Appeared only in the 1860 edition of the Mitchell Atlas. In subsequent editions this map was replaced with individual state maps. Features the floral motif border typical of Mitchell maps from the 1860-67 period. Prepared by S. A. Mitchell for inclusion as plate 33 in the 1860 First Edition issue of Mitchell's New General Atlas. Dated and copyrighted, 'Entered according to Act of Congress in the Year 1860 by S. Augustus Mitchell Jr. in the Clerk's Office of the District Court of the U.S. for the Eastern District of Pennsylvania.'