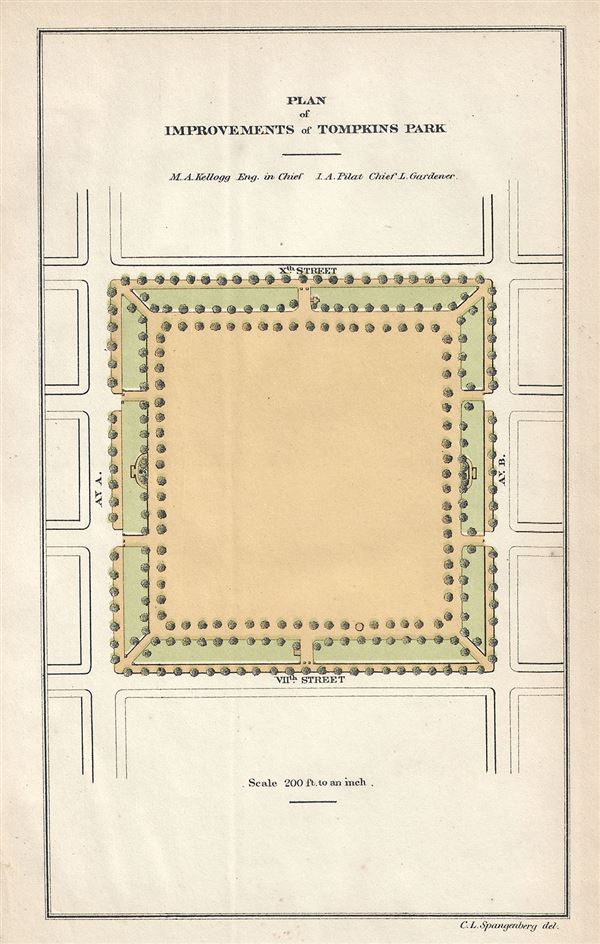 This is a rare 1871 example of Kellogg and Pilat's plan for the improvements of Tompkins Square Park, New York City. Tompkins Square Parks, located between Avenue A and Avenue B and 7th St. and 10th St. in New York City's Alphabet City, has been witness to several demonstrations and riots over the years. Originally a salt marsh, the area was part of land belonging to Governor Peter Stuyvesant. The site was acquired by the city of New York in 1833 as a gift from Peter Stuyvesant, on the condition that it would be used as a public space. After bringing in landfill, building a fence and planting trees, Tompkins Square, named after Daniel D. Tompkins, the Governor of New York from 1807 to 1817 and Vice President of the United States from 1817 to 1825 was opened in 1834. In 1866, the New York State Legislature ordered the removal of trees and the conversion of the space into an open parade ground for the Seventh Regiment of New York. A few years later however, the park was redesigned and re-designated as a public park. The 1873 issue of Harpers Weekly describes a typical night in Tompkins Square:

Through the long summer day its bare stretching distance of sand is a glaring Sahara: but when the sun has gone behind the high houses of Avenue A, the great square is the attractive centre of the whole neighborhoodÂ—a reservoir of cool air, calling laborers out of their tenement homes as soon as they have eaten supper...Tompkins Square this evening presents everyday life; not church or picnic, with better coat and brighter ribbon, but home turned out on exhibition, bareheaded and barefooted. Stout arms that have become sinewy through the toil of the machine-shop and the wash-tub are brawny, bare to the elbow. Human life is uncovered here, and takes its last draught of air before it retires to hired chambers, and throwing itself on welcome beds, too often in stifling inside bedrooms, tired nature closed the eyelids until another day.

Over the years Tompkins Square Park, that has over the years served a place to voice dissent, has been renovated and transformed several times. Today the park is equipped with two playgrounds, a handball court, chess tables, dog run and a basketball court, and is one of the New York City's popular parks. This plan was created by M. A. Kellogg and I. A. Pilat for the First Annual Report of the Board of Commissioners of the Department of Public Parks for the Year Ending May 1, 1871. Maps of Tompkins Square Park are exceptionally scarce, making this a rare find and an important addition to any serious collection focusing on New York City.