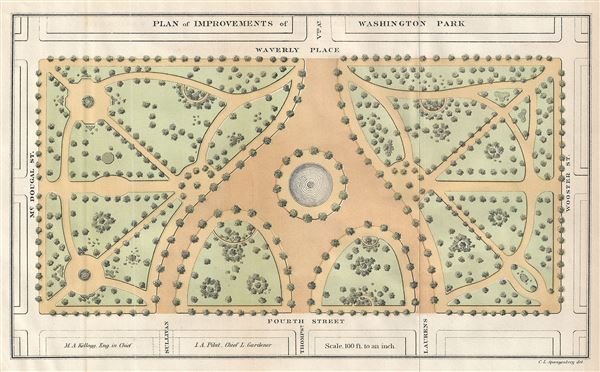 This is a rare and beautiful 1871 map of Washington Square Park, New York City by Kellogg and Pilat. Named after George Washington, the area was originally a marsh which was later converted into a Potter's Field, used to bury the cities unknown and poor and for the victims of the Yellow fever epidemic in the early 19th century. Even today, the remains of over 20,000 bodies rest under Washington Square. The city acquired the land in 1826 and turned into the Washington Military Parade Ground and later a public park. The area quickly became one of the prime residential neighborhoods for a number of wealthy New Yorkers. The Greek revival style mansions that still stand on the north side of the square were built during this era. Henry James, in his famous short novel 'Washington Square' set in one of these houses writes:

I know not whether it is owing to the tenderness of early associations, but this part of New York appears to many persons the most delectable. It has the kind of established repose which is not of frequent occurrence in other quarters of the long shrill city.

In 1870, Parks Engineer in Chief M. A. Kellogg and Chief Landscape Gardener I. A. Pilat redesigned and improved the park, replacing the old fountain with one from the southern entrances of Central Park and the straight paths meant for military reviews with curving pathways. The park has since been redesigned, but some of the elements of this 1870 plan can still be seen today. Thanks to the efforts of Kellogg and Pilat, the citizens of New York City have the privilege of enjoying what is, without question, one of the finest examples of a planned urban public recreation areas in New York City.

This plan was created by M. A. Kellogg and I. A. Pilat for the First Annual Report of the Board of Commissioners of the Department of Public Parks for the Year Ending May 1, 1871. Maps of Washington Square Park are exceptionally scarce, making this a rare find and an important addition to any serious collection focusing on New York City.