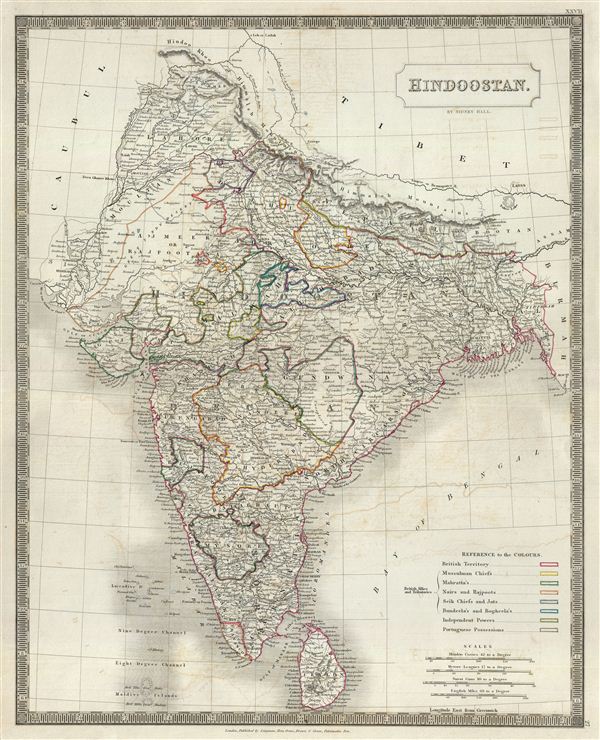 This is a beautiful map of India from Sidney Hall's extremely scarce 1835 New General Atlas. It covers the subcontinent from the Hindoo Khoo (Hindu Kush) Mountain range to Ceylon (Sri Lanka) and from the mouth of the Indus to Birmah (Burma or Myanmar). The modern day countries of India, Sri Lanka, Pakistan, Nepal, Bhutan, Bangladesh and Burma are included.  This stunning map offers excellent detail throughout with color coding indicating various political divisions and princely states. Countless important cities including Delhi, Agra, Luknow, Cathmandoo, Goa, Bombay, Calcutta, Colombo, and others are noted. Hall identifies battlegrounds and railway routes. He also notes the elevation several mountains. The region near Gundwana in modern day Chhattisgarh is curiously marked 'unexplored.' A legend in the lower right quadrant lists the reference to the colors identifying the British Territories, Portuguese Possessions, Independent Powers and the various British Allies and Tributaries.

Most of India had, at this juncture, had fallen under the control of the British East India Company. India, long an exporter of manufactured goods, instead became supply house for raw materials to the British Empire. The Empire by this time had also started initiating the non-economic programs for education, culture, and social reform throughout the Subcontinent. Most historians consider this to be the true beginning of India's colonial period.  The East India Company ruled India until 1858, after which it was governed by the British Raj until it finally gained independence in 1947.