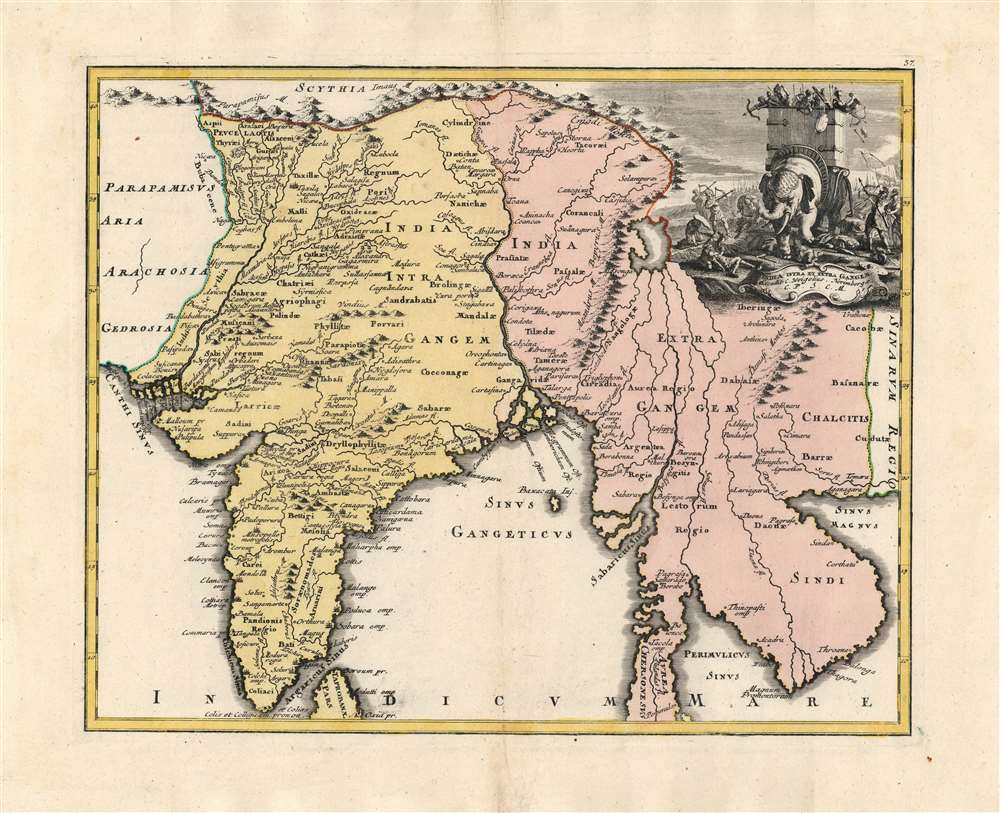 An exceptional example of this 1720 map of India and Southeast Asia from Christoph Weigel's Descriptio Orbis Antiqui. The map shows the region according to early 18th century topography, but integrates with it the ancient, second-century toponomy from Claudius Ptolemy's Geographia.

A New Take on Ptolemy

Many editions of Ptolemy's work had been published throughout the 16th and 17th centuries, both to teach the principals of the Geographer's science and to support the study of the classics. The difficulty with which Ptolemy confronted the modern scholar was that, in addition to the drastic changes in place names, the overall mapping of the world had developed by leaps and bounds. Ptolemaic maps even of familiar parts of the European world only slightly resembled the regions they depicted, compared to the modern maps available. Weigel's goal was to produce an atlas using Ptolemy's terminology but showing it in the context of up-to-date topography.

This map is titled 'India Intra et Extra Gangem which means 'India inside, and outside, the Ganges.'India Intra Gangem and India Extra Gangem were Ptolemy's terms for India and Southeast Asia, respectively. Appropriately, the River Ganges forms the center of this map, dividing the subcontinent on the left from modern day Bangladesh, Burma, Laos, Cambodia and Vietnam on the right. Weigel names Halong Bay 'Sinus Magnus,' the Ptolemaic term for a 'great bay' thought to exist at the easternmost part of the Indian Ocean - which in Ptolemaic geographical thought was an inland sea. Sri Lanka appears at the bottom of the map with the ancient name of Taprobana, which many scholars had sometimes applied to Sumatra. The map extends northwards to the Himalayas.

Weigel's use of up-to-date geography did not guarantee that he was always using correct geography. East of the Ganges and north of what would become Burma appears the mythical Lake of Chiamay, roughly in what is today Assam, India. Sixteenth and Seventeenth century cartographers postulated that such a lake must exist to source the four important Southeast Asian river systems: the Irrawaddy, the Dharla, the Chao Phraya, and the Brahmaputra. This lake began to appear in maps of Asia as early as the 16th century and persisted well into the mid-18th century. Its origins are unknown but may originate in a lost 16th century geography prepared by the Portuguese scholar Joao de Barros. It was also heavily discussed in the journals of Sven Hedin, who believed it to be associated with Indian legend that a sacred lake, Mansarovar, linked several of the holy subcontinent river systems. There are even records that the King of Siam led an invasion to take control of the lake in the 16th century. Nonetheless, the theory of Lake Chiamay was ultimately disproved, and it disappeared from maps entirely by the 1760s.

At the top right corner sits an elaborate engraving of a war scene, where an armored war elephant is carrying a wooden fortification on its back containing several soldiers who are, in turn, attacking enemy forces on the ground. There are archers both on the elephant's back and on the ground, along with trampled victims. An approaching army's soldiers, spears, and banners can be seen advancing in the background.

This map was published in 1720 by Christoph Weigel for his Descriptio Orbis Antiqui. We see some thirty examples of the book in OCLC, but only eight examples of the separate map are catalogued in institutional collections.