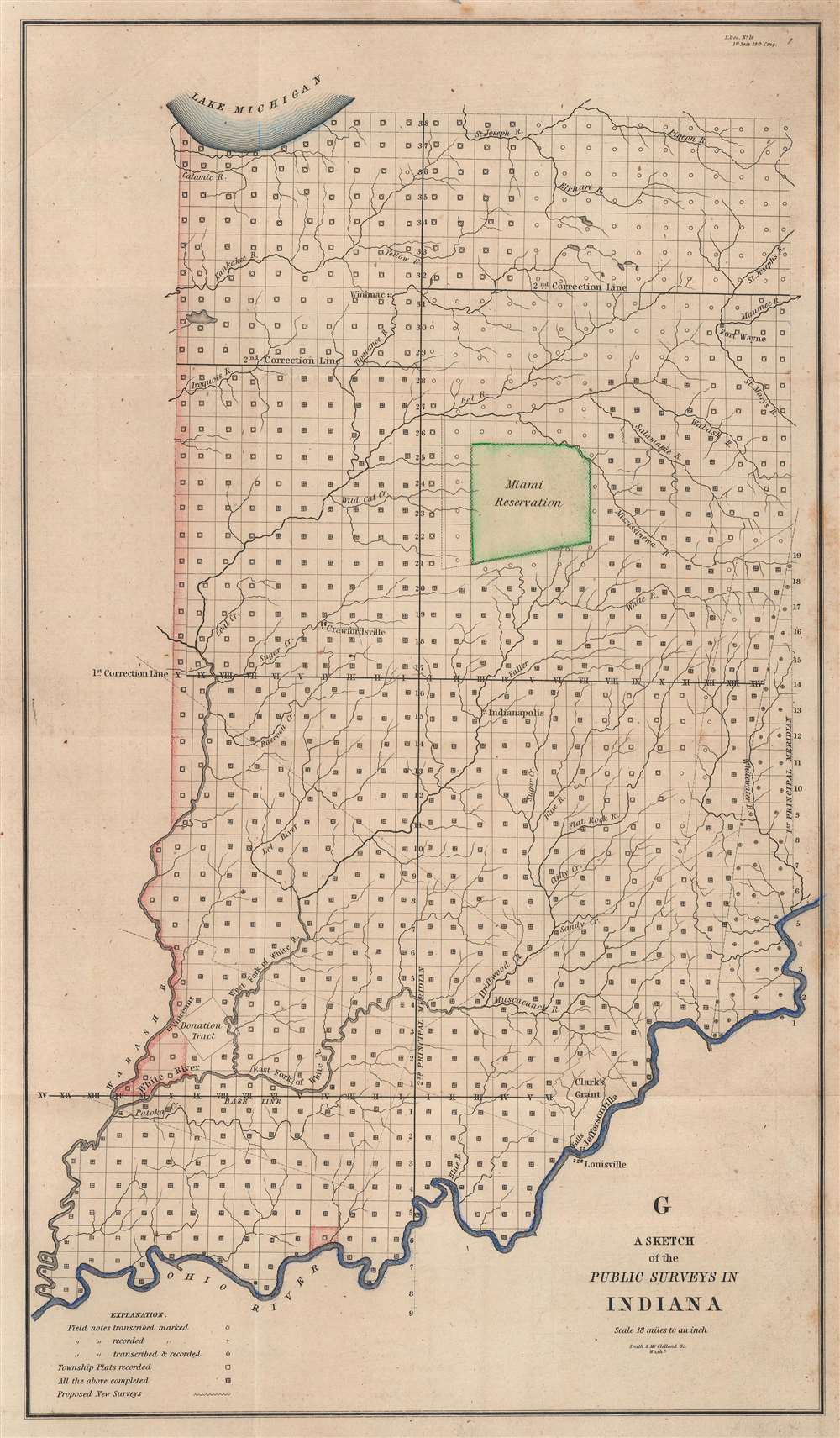 Highlights Clark's Grant and the Donation Lands east of Vincennes.
$250.00

This is an 1845 General Land Office map of Indiana. The entirety of Indiana is platted into townships, with the exception of Clark's Grant, the Miami Reservation, and the 'Donation Tract' (east of the Wabash River and north of the White River in western Indiana just east of Vincennes). Jeffersonville, Fort Wayne, Winimac, Indianapolis, Vincennes, and Crawfordsville are labeled. Creeks and rivers are illustrated throughout.

Clark's Grant, situated northwest of the Ohio River across from Louisville, Kentucky, was granted to George Rogers Clark in 1781 by the state of Virginia for service during the American Revolutionary War. Clark (1752 - 1818) led the Virginia militia into the Illinois Country during the Revolutionary War as part of the Illinois Campaign. Virginia promised land to volunteers who joined the expedition. The Virginia Legislature fulfilled the promise on January 2, 1781, when it offered Clark and his men 150,000 acres on the northwest bank of the Ohio River. A commission of officers from Clark's militia selected the tract across the river from Louisville (which Clark founded during the war). The land was allotted in 1784, and Clark received over 8,000 acres, the largest tract. Privates were given 108-acre tracts, while sergeants received 216 acres. Those of higher rank received proportionally larger amounts of land.

A large square tract of land labeled 'Donation Tract' appears east of Vincennes. This tract of land was allotted by Congress to be divided among French and Canadian inhabitants of Vincennes who could prove hereditary residency in the old French post before 1783. Founded early in the eighteenth century as part of a network of forts and fur trading posts, Post Vincennes benefited from a large grant of land along the Wabash River from good relations with the Piankashaw Indians. This land was administered almost communally, with very few private landholdings. None of the French inhabitants of Vincennes lived on the land they farmed; everyone lived town.

Post Vincennes passed into American hands following the Illinois Campaign during the American Revolutionary War. Soon after the war was over American settlers began flooding into the area. These newcomers viewed land differently than the French inhabitants. They believed in the importance of private land ownership and demanded their own grants. The economic and demographic change disenfranchised the former French and Canadian settlers, leading to severe economic hardship. The former French citizens petitioned Congress for land grants in 1787, and by 1788 Congress had passed a resolution granting 400 acres to any French or Canadian inhabitants of Vincennes whose families lived there before 1783.

The township was created as the measure of the Public Land Survey System, which was first widely implemented to survey the Northwest Ordinance. The Public Land Survey System allowed for the systematic surveying and mapping of any territory gained by the United States. It played a pivotal role in subsequent settlement and administration new territories and states. The work of the survey influenced American Indian removal efforts, town building, railroad grants, new settlement, and more. Moreover, the efforts of the Federal Land Survey were significant in centralizing power with the Federal Government at the expense of states. h6>Publication History and CensusThis map was created for and published by the General Land Office for a report to the United States Congress in 1845. We note ten examples of the separate map cataloged in OCLC: New York Public Library, the University of Notre Dame, the Indiana Historical Society, the Indiana State Library, the University of Illinois at Urbana Champaign, and the Wisconsin Historical Society.