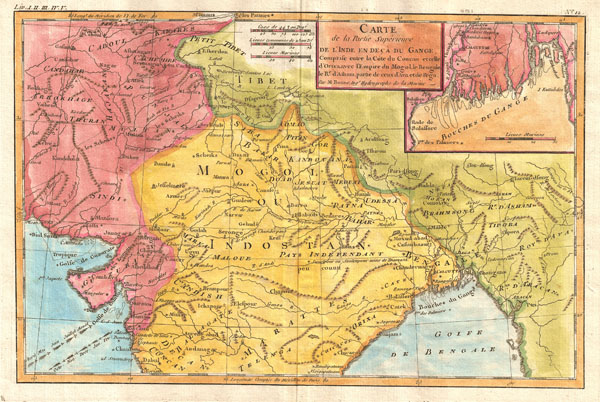 A beautiful example of Rigobert Bonne's decorative map of northern India. Covers the northern region of subcontinent from Dabul in the south, to its border with Tibet in the north. Also shows what is modern day Pakistan and Afghanistan in the West, and China in the east. To the east is Bangladesh. Includes a detailed inset showing the area around the mouth of the Ganges with Calcutta in the center. Names a number of important Indian cities and river systems. Rhumb lines appear in nautical zones. Arrows in the lower left and lower right show the direction of prevailing winds during the dry season and the monsoon season. Drawn by R. Bonne c. 1780's.

Yale University, Beinecke Rare Book and Manuscript Library, 1974 +227.
Looking for a high-resolution scan of this?