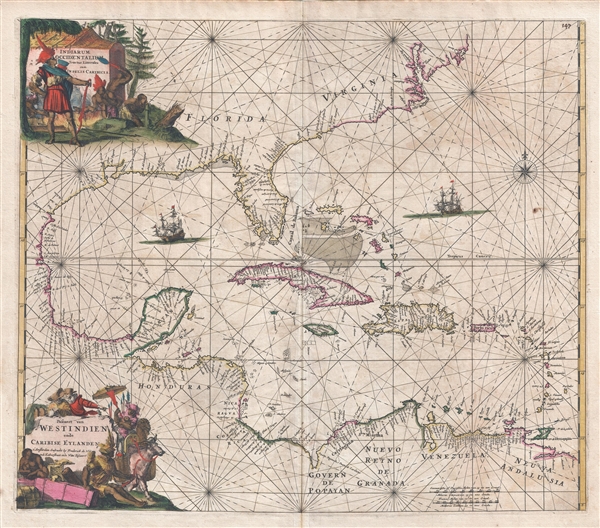 A fine and rare old color example of the first edition of Frederick de Wit's 1675 nautical chart or maritime map of the West Indies, Central America, Gulf of Mexico, and Florida. Printed during the Golden Age of Caribbean Piracy, this sea chart covers the eastern coast of North America from Cape May and the Chesapeake Bay to Central America and the Spanish Main. It includes a reasonably detailed chart of the West India Islands, Florida, and the Yucatan. Note the Mississippi River Delta has not yet been identified. The whole is filled with rhumb lines and illustrations of galleons. Cartographically the map was partially derived from Hessel's Gerritsz's map of 1631 with updates derived from Joannes van Loon's map of 1661.

This map was published in de Wit's Orbis Maritimus ofte Zee Atlas of 1675. It was engraved by Romein de Hooghe. The first edition can be identified for the absence of a western cost of Central America and the absence of New York and New Amsterdam in the upper right quadrant, both of which were added in the second edition. Subsequent editions were issued by L. Renard and the Ottens family.

All editions of this map are scarce but the later editions do appear from time to time. The first edition, as offered here, is quite rare with no examples appearing on the market since 2007.