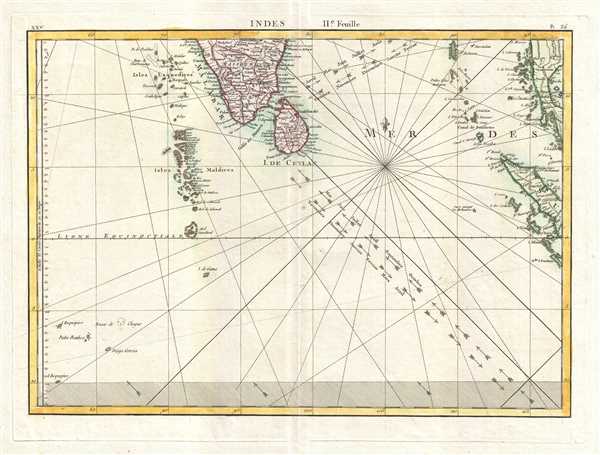 Attractive map of southern India, Sri Lanka, and the Maldives, an island paradise.
$250.00

A beautiful example of Rigobert Bonne's 1770 decorative map of southern India. Covers both the Malabar and Coromandel coasts as well as the Maldives, Ceylon (Sri Lanka), the Andaman Islands, and parts of Sumatra and Southeast Asia. Rhumb lines throughout. Arrows in the Indian Ocean show the direction of prevailing winds during the dry season and the monsoon season. This important Indian Ocean wind system, which blew one way for half the year, and the opposite for the other half, created a critical trade artery from antiquity to pre-modern times. Drawn by R. Bonne in 1770 for issue as plate no. B 26 in Jean Lattre's 1776 issue of the Atlas Moderne.